Review: Kick is Salman's best film in a decade 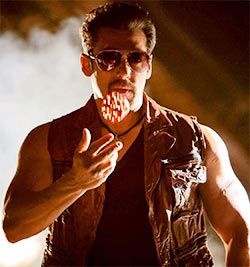 In the world of harebrained Bhai films, Kick is the best made and the most fun, says Raja Sen.

It was bound to happen.

At some point, a canny producer was sure to realise that all that matters in the kind of movies Salman Khan does nowadays is Salman Khan.

After looking at, for example, Bodyguard or Ready -- hideous, tacky eyesores that nonetheless rule the charts -- it was only a matter of time before he'd see little need for an expensive, credit-hogging middleman and chuck this "director" fellow out.

Blasphemous, I know, but with films like this, it's hard to argue.

I remember a Mithun Chakraborty interview many moons ago where the actor -- speaking of his heartland-conquering B-movies -- described a continuity error, a fight scene where he was wearing a red shirt in one shot and a blue shirt the next.

The director asked Chakraborty to reshoot but he laughed off the idea, saying it should be released as it was, and that his audience bothered only about him, not trifles like that.

He was right, the film was a hit, and, alarmingly enough, our biggest blockbusters today seem to run on the same principles. Especially those that star Salman.

It is a pleasant surprise, thus, to see producer Sajid Nadiadwala taking his directorial debut seriously, making sure every part of the engine is slickly oiled.

The loopy script coasts along breezily, Ayananka Bose's cinematography is lush (and frequently more artful than you expect from a Salman project), the girls are considerably attractive, and -- perhaps most importantly -- the film smartly avoids the self-serious drivel that can ruin a shamelessly silly action film. (Case in point, the ponderous Dhoom 3, Kick, in one line, is basically Dhoom done right. But more on that later.)

The plot is threadbare enough to not matter.

Shaina, a psychiatrist narcissistic enough to wear her name on a chain and depressive enough to turn 'sex' into 'sorrow' while playing Scrabble, is lamenting the loss of her lover.

She tells her new suitor, a cop, about her ex, a guy called Devi Lal who did anything for kicks. (Including, presumably, always refer to them in the singular.) Devi quirkily won her over, but things soured and he dumped her, and she's oh so heartbroken.

The cop, Himanshu, tells Shaina he can empathise, because he too has someone in his life: a masked master-thief he just can't get a hold of. (Ahem.)

No points for guessing the man of their dreams is the same. Salman Khan doesn't often bother to act these days, swaggering through most of his parts without any consistency, yet he seems to be playing this Devi/L properly and in character, perhaps freed by the insouciance of the anything-goes role.

Even in weak scenes, his screen presence is extraordinary.

He's clearly having a blast not having to mouth lewd lines or take his shirt off.

Every now and again, Kick delivers flashes of that gleeful spontaneity we saw in him back in Pyar Kiya Toh Darna Kya when he was hopping around one-legged in a chicken-coop calling himself Murgaman.

Kick perfunctorily skips through most of the emo stuff -- inevitable scenes showing character motives and changes of heart -- in its quest to find the shiniest Bhai moments.

The film is predictable, the script is lazily convenient, and yet there's a surefootedness in the way Nadiadwala jauntily carries on increasing the tempo, piling on the Khan.

His cinematographer shows some masterful framing and composition, capturing the energy of the moment very well most times, and at other times making things look very pretty.

Jacqueline Fernandes looks good as a bimbette taken in by Khan and, despite her unfortunate dialogue delivery, isn't ever around in stretches long enough to be grating.

Mithun (yes, he of the red/blue shirts) plays Salman's father; Nawazuddin Siddiqui makes bottle-popping noises with his mouth and borrows Manoj Bajpai's Aks laugh to play villain; and Randeep Hooda is the cop who intriguingly enough appears to be quite turned on by the crook he's after. If all that sounds trashy, well, it is.

But it's mostly fast enough to feel like a blast. At its worst -- and there are more than a few scenes that are too long, too mawkish -- Kick is at least entertainingly cheesy in a drinking-game sort of way.

It's never objectionably bad, and that hasn't been said about a Salman Khan film for around fifteen years.

While on the 90s, there seem to be peculiar (but again, amusing) tributes of some sort: a kooky flashback about Salman's childhood is animated a la Def Leppard's Let Get Rocked; and an item song starring the ravishing Nargis Fakhri takes place in some freaky netherworld equally fit for both Alisha Chinai and The Undertaker. It's almost trippy.

The rest of the film is The Salman Khan Show.

The first Dhoom was merely a fun action film; the second amped it up with massive stars, more bling, louder stunts, better bikinis.

Dhoom 2 didn't even try to make sense -- a man was dressed up as a Grecian statue in one shot and a watchman in the next -- but it looked so captivating we were blinded by its gloss.

Dhoom 3, unfortunately, tried way too hard; it stole a plot, added in melodrama, slowed down its chases.

The result was an utterly unremarkable car-wreck.

Kick, therefore, is the Dhoom 2 of the Salmaniverse.

It looks good, moves fast, shows off its superstar. In the world of harebrained Bhai films -- Dabanng included -- Kick is the best made and the most fun. If you're a fan, you just hit the jackpot.