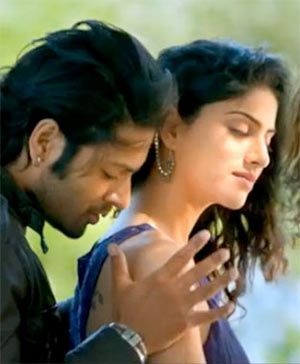 Ghosts like to hang around dimwits with an uncontrollable libido.

Only a certified dolt would check into a spooky, vacant hotel and stay on because a mysterious head turner runs it or accept rides, shelter and a suspicious glass of wine from creepy, crooked strangers.

Khamoshiyan, written by Vikram Bhatt and directed by debutant Karan Darra, is populated with such oversexed fools and, again, conveniently assumes the viewers will shove their brains in a corner as remote as the mansion on screen to revel in the cheap thrills that ensue.

It all begins when a one-book wonder (Ali Fazal) shaken by his bitter (read five minutes of flat out phoniness) breakup, ventures into the deep, desolate woods of Kashmir seeking inspiration for his next novel. It’s actually South Africa and that’s why such absolute nonexistence of army.

He’s instantly drawn to the manor’s lady, manager and housekeeper (Sapna Pabbi) as emphasized in the camera’s constant focus on her strategically bared cleavage. All that multitasking, plus nursing a bedridden husband (Gurmeet Chaudhary), would leave anyone sapped but her cold, robotic tone vies for a mystifying stature.

'Hum sab apne raaz ke shikaar hain,' she muses as if explaining why Vikram Bhatt is trapped in a horror rut.

Curious events ascertain that the site is haunted. Only Khamoshiyan is so consumed by its cheesy scares-sex-scares-sex pattern, the upshot is tacky and unintentionally hilarious. At one point, the exasperated ghoul actually has to explain the range of its supernatural mumbo jumbo to Khamoshiyan’s daft protagonists.

The demonic presence is one of the most juvenile representations of evil I’ve witnessed in a while.

As if it’s not humiliating enough that no one takes you seriously, the wretched thing has to resort to form shifting tactics that render it more mutant than monster. Also director Darra, please teach your bhoot some keyboard shortcuts, it’s embarrassing to see how much time it took to delete text from one measly document.