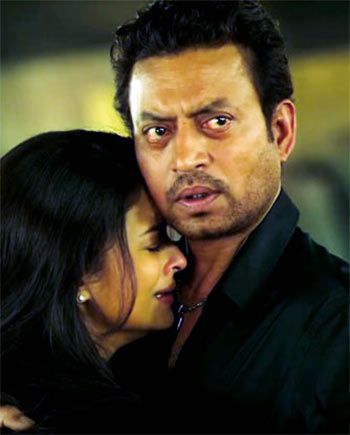 Jazbaa is a mercifully brief movie, just about two hours long, but that’s about it in terms of the good part, warns Raja Sen.

In many ways, Jazbaa is the Irrfan Khan acid test.

Not that Irrfan needs to be tested, of course.

However, those are wonderfully written parts in films helmed by fine directors, but does Irrfan have the bulletproof screen-presence required for blockbuster buffoonery?

Can he commit to a moronic script?

Does he have, I dare ask, the Khanhood?

Sanjay Gupta’s Jazbaa says no. (And for that we should all heave a sigh of relief.)

Jazbaa begins with Aishwarya Rai jogging across Mumbai in a black catsuit. (In case Gupta decides to switch genres midstream, I assume.)

She drops her daughter off to school, goes and kicks ass in court, and then tells her childhood friend, Yohaan (Irrfan) -- a 'highly decorated' cop in the middle of some extortionate cops-only blackmail racket -- that she is a lawyer who defends the guilty because 'bekasoor hamaare fees afford nahin kar sakte', the innocent can’t afford her.

All this after Khan, who wears dark shades indoors -- probably to shield himself from Gupta’s relentlessly radioactive green lighting -- is accused by fellow cops of an Amitabh Bachchan swagger, which, it must be said, is the weirdest way to reference his heroine’s father-in-law.

Later Rai, back in her catsuit, runs a race at her daughter’s school with all the other mothers briefed not to overtake her (and given comfortable, normal clothing as a payoff).

She wins and looks for the kid, but as she shouts 'Sanaya' over and over, her eyes are bloodshot by the third yell -- which seems a bit much considering, for all Rai knows at this point, the kid could just have gone to the little girl’s room, right?

The hysterics have begun, and the rest of the film is an excuse for Rai to bawl her increasingly red eyes out while Amar Mohile, the man who ruined Ram Gopal Varma’s oeuvre (and eardrums) with maddeningly loud background music, amps it up so our ears bleed.

In one line, the idea of the film -- about a mother trying to save her daughter by getting a murder suspect off trial, thereby betraying a victim’s mother in the process -- is a strong backbone for any melodrama and, naturally, comes from a Korean film. It is Gupta’s hyperactive treatment that is the culprit, swooshing cameras and over-saturated visuals and an edit-pattern that prides itself on how audible the cuts are. Sigh.

The dialogue is horrendous, with Irrfan getting the kind of lines you’d find on a sticker behind an auto-rickshaw.

But while he has to spout weird analogies about relationships and mobile networks, he isn’t alone.

A sly beardo tells Rai, with much import, that 'what has never happened some day happens.'

Shabana Azmi, who plays the victim’s mother, and her daughter exchange some perplexing lines about how holding a cup by its handle increases the distance between the tea and the drinker, and somebody who wants to live would want to feel life with her naked fingers. Why even a cup then, Mr Gupta? Why not have characters bathing their hands in tea and licking it off? (Sorry. Didn’t mean to give you a visual idea. Don’t use this next time. Please.)

Gupta is a slickly efficient action director, but there aren’t even worthwhile set pieces in Jazbaa.

It is a mercifully brief movie, just about two hours long, and goes by briskly enough, but that’s about it in terms of the good part.

Nothing is consistent here.

Chandan Roy Sanyal, who plays the convicted murder suspect, goes from ferocious to cool-headed, from smiling to schizophrenic, for no apparent reason.

Meanwhile, the heart bleeds for Atul Kulkarni, the fine actor playing a lawyer in this tacky film while his wife Geetanjali wowed us as a lawyer in the striking Court.

Khan struggles with a horrid part where, after he learns his friend’s daughter has been kidnapped, he instantly throws a tremendous tantrum, a hissy-fit about why he wasn’t told first instead of helping this visibly unstable woman.

At some point, Gupta wants to make Khan appear pensive and lonely, so he sits at a giant table in a restaurant, by himself, and then -- being a character given to talking to himself and to the camera -- he tells himself to run.

But it is too late.

Gupta has cut to a generic hip-hop song, a ‘party song’, the kind Irrfan himself satirised so well recently.

Earlier, Khan offers a fellow policeman a bribe of the very purest Shilajit, but that might have come in handier for Gupta’s flaccid film.

You can give us red eyes in a green film, Mr Gupta, but that doesn’t make it Christmas.