Review: Inside Llewyn Davis is another Coen triumph 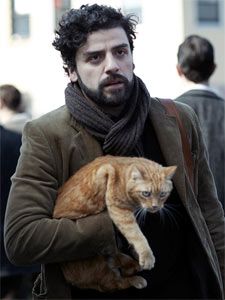 Inside Llewyn Davis is a fantastic film, feels Raja Sen.

1961. The sixties but not quite The Sixties just yet.

America had indeed picked up a revolutionary new guitar but was only beginning to learn how to strum, plucking at it tentatively as genres and heroes and venues were birthed and discarded in blinks of sleepless eyes.

Within the outstretched canvas of limitless hope there lies many a dead end of bleak disillusionment.

It is here that we meet our dour leading man, Llewyn Davis, without a home or a winter coat or any genuine prospects. He gets by with a little help from… one would say friends, but he doesn't have any.

The only one, his musical collaborator, Mike, has thrown himself (non-traditionally) off the George Washington Bridge. Llewyn might not have triggered the suicide, we never get details, but from what we see of his disposition -- and his ability to turn everything to shit, “like King Midas’ idiot brother” -- he isn't likely to have helped matters much.

And so we smile drily as canny storytellers Joel and Ethan Coen give us a stumbling, unheroic protagonist and rigorously zoom in on every wart.

Everything about Davis is almost cartoonishly miserable except when, eternally against the odds, he picks up his six-string and sings. The film and its viewers, the leading man and his listeners, are immediately changed by what is simple and sublime, graceful but grounded.

For all his scratched and blemished life, Davis happens to be a flawless musician, a troubadour who deserves ears and cheers.

Yet, as we see at the beginning and the end of the film, as Llewyn Davis winds up a stunning set and a 20-year-old Robert Zimmerman sits down to begin his passage toward immortality, even this irascible, ever-dismissive protagonist feels his jaw drop and realise that -- while standing so close to the real thing, on a night that could have changed everything -- he is but a talented doodle in the margins, not fit even to be a footnote.

Instead, he gets socked in a back-alley.

Davis is played with remarkable ease by Oscar Isaac, an actor who marvellously blurs the line between performance and documentary-like realism. He’s tired and disgruntled and so jaded his stoniness seems obvious.

He needs a night’s sleep, but -- nomadically going from couch to couch in an era before websites and hipsters made it cool -- that is easier said than found. There is a professor and his wife who welcome him unconditionally and with open arms, but he snaps at them and loses their cat. (The cat, by the way, is called Ulysses, like the book based on The Odyssey, a book Joel and Ethan once turned into the magnificent O Brother, Where Art Thou? This new film, in case you’re wondering, has a soundtrack even richer than that great musical.)

The Coen landscape is characteristically populated by oddballs, and all of them in this one are tied to volume.

Davis’s ineffective manager, Mel, lives in a dimly lit office, likes attending funerals and gets into loud exchanges with his ancient secretary. “You got Cincinatti?”, he yells. “You want it?”, she barks back. “Could I have it?”, “Should I bring it?” and so continues the hard-of-hearing tango.

A young soldier denounces comfort and eats cereal loudly, and proves -- despite his Llewyn-frustrating squarishness -- to be a better-liked musician than our befuddled beardo. A big-time producer squelches as he walks into a music hall past upturned chairs.

A beat poet called Johnny 5 lies about his cigarettes and sits in near-defiant silence, while his companion, a jowly jazz musician named Roland Turner, is introduced to us by the sounds he makes when he wakes up with literal squeaks and gasps.

Turner, played by Coen favourite John Goodman, is an uproarious character, a cane-wielding weirdo who cuts off his own stories to start new ones, always obnoxious and quite regal in his pushiness.

He’s worth a movie all his own, and -- like the music -- single-handedly makes Llewyn’s life (and ours) infinitely more interesting. But Davis doesn’t care, and in this destructive, all-encompassing derision lies the Coen’s masterstroke: his antipathy toward the world makes him loathsome but fascinating.

Joel and Ethan and Llewyn never let up, and we watch and smirk and commiserate and feel the despondent stupor descend upon us, sliced occasionally by the music, shining in like sun streaming into a dank attic.

Davis doesn’t even sing to reach his audience. To a Chicago music producer, he sings an English ballad, The Death Of Queen Jane, about one of King Henry VIIIs doomed wives. In a line hilariously echoed by the Merchant Marines when he goes to sign up, he’s rightly told he’s not current.

It’s a catastrophically bad decision to pick a miserable lament while pitching to a man used to selling out venues, but on some level Davis believes -- and this may well be all that Llewyn believes --  in the purity of the song. And how it can transcend everything.

He isn’t wrong. When we sit alongside the producer, played by the wonderful F Murray Abraham, the song transports us to a different plane.

As does this fantastic film. It might just be A Mighty Wind in extreme close-up, or the Coens filling in another blankly open-ended tale as brilliantly as only they can, but the thing to remember about Inside Llewyn Davis is that while it might not be new, it never gets old.