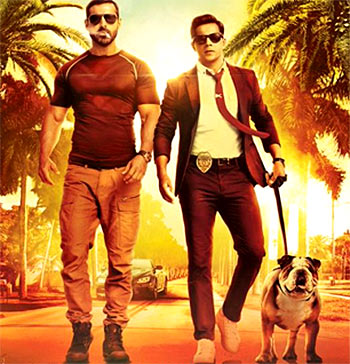 The first half of Dishoom is breezy and snappy, and the increasingly irrepressible Varun Dhawan is on point, feels Raja Sen.

There are some filmmakers who make feature-length trailers.

They think they’re making an action movie, of course, but the fact is that everything -- from an overabundance of slow-motion, to the way words like 'one day ago' fly across the screen in the Dhoom font, and the way the film starts and ends with music videos -- is for effect.

Done well, this often obvious style can be rather rollicking, and there are times when Rohit Dhawan’s Dishoom is actually fun.

The first half is breezy and snappy, and the increasingly irrepressible Varun Dhawan is on point.

The setup is dynamite. It isn’t particularly groundbreaking dynamite, but it is a potentially crackling premise: India’s top cricketer is kidnapped ahead of an India-Pakistan final in the UAE.

There is much room for hilarity in a setup like this, and the film taps into a fair bit of it, even as the set-pieces get bloated and the background score thuds with relentless urgency and repetition. (To me, there were times when it feels like watching a music video version of 99, a cricket/match-fixing film I once worked on.)

This cricketer -- Viraj, a combination of Virat Kohli and Yuvraj Singh, if you will -- is played by Saqib Saleem, and the youngster obviously knows how to hit full-tosses all over the place. Saleem is a fine performer and the cricketing bits seem as authentic as they need to be in a film like this, and the initial mystery of who kidnapped Viraj is an intriguing one.

On the trail are Kabir, an Indian supercop flown in to hunt him down, and Junaid, a Dubai-based Indian cop itching for action. It is all Buddy Comedy 101, but as can be said justifying 90 percent of all movies starring The Rock, we all know the genre works besides its predictability because of the way the actors play off each other. Into each Murtaugh a little Riggs must fall.

The big problem here is with the heavy.

John Abraham plays Kabir, the douchey tough-cop who smokes in elevators and speaks to his girlfriend like a bully, but Abraham -- who, at one point several films ago, was at least attempting to act -- has turned into a top-heavy slab with all the expressions of granite. He weighs Dishoom down considerably. Even his half-winking smirk now appears leery, as if he’s been bench-pressing with his cheeks and can’t smile a human smile any more.

This is depressing because of just how frothy Varun Dhawan keeps things. With the natural, cocky charm of a young Will Smith -- a fact alluded to when Dishoom references Men In Black with its heroes calling themselves K and J -- Dhawan is spontaneous and funny but, most importantly, sincere.

He hits the emotional beats lightly but firmly -- like when he tears up after having finally found a dog -- and these are what sell his character, the way he can establish earnestness in a second and go back to being goofy right after.

Still, like I said, the first half is a lark. Varun is in form, Saqib’s realistic, and there is an entertaining cameo by Akshay Kumar who puts the man in ‘man-bun.’

It is after the interval, when the shenanigans have been left to an exhausting Akshaye Khanna, the villain of the piece, that tedium really sets in.

The film keeps trying to concentrate on the plot, which is weak, and because the action scenes and chases are long and repetitive, merely changing backgrounds don’t help things as much.

Jacqueline Fernandez joins the action, running in and unable to keep a straight face, but there is a priceless, awestruck moment when the shoe drops and she finally realises who these two cops are looking for.

There is much more that could have been done here. It should be snappier and the jokes sharper, and the plot could so, so easily have been made water-tight. There are even times, unforgivably enough, when it begins to feel immaterial that the kidnapped quarry is a cricketer; it could be just anyone held up for ransom.

But ah, the film is clearly aiming for laughs, and even when it gets lost along the way, blindsided by some unnecessarily elaborate action moment or by a bicepped un-actor, it still provides a fair bit of corny fun.

The film’s best parts are Dhawan asking a helicopter pilot to pull over 'side mein,' or Satish Kaushik trolling people on the phone.

If Dishoom does well, however, I do hope they’ll avoid John in the sequels -- all this film needed was a cop out.