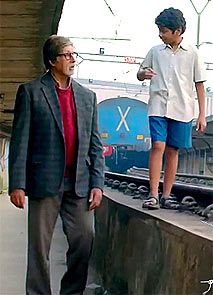 Bhoothnath Returns has a few laughs but it ignores the basics, rants Raja Sen.

I thought only Clint Eastwood delivered election manifestos around an empty chair.

Bhoothnath Returns, directed by Nitesh Tiwari -- a follow-up to the 2008 hit about how many faces Amitabh Bachchan could pull -- is about a ghost so fed-up with our corruption and our politicians that he decides to stand for the elections.

It’s a cute concept, and our children’s films could certainly use more panache, but while in the hands of a Rajkumar Hirani this idea would have been gold, and made with brevity this could have been another OMG Oh My God, what we’re given turns out to be merely, wastefully exhausting.

Bhoothnath is a ghost who can’t scare people, making all the ghosts in BhootLand -- a Hogwarts-like building where ghosts live -- burst a gut looking at him.

He’s in an endless line to be reincarnated, but rather than wait his turn, the ridiculed Bhoothnath decides to resurrect his reputation by going down to earth as a ghost, again, and this time successfully scare a few kids.

He walks among living kids and realises they’re a far more danger-loving crowd than he remembered, and won’t be spooked easy. And then, just like in the first film, one little boy can see him.

The ghosts upstairs call it a glitch, but it is this nutty kid (called Akhrot), who helps Bhoothnath scare off a few neighbourhood bachchas... and yet, for some reason, the film continues.

This is confounding because suddenly, after a relatively efficient first 15 minutes, the film doesn’t have any rules anymore. And it’s imperative that a comedy with a ghostly leading man have its own set of rules: what his mission is, where his roadblocks lie, what his powers are, what his weaknesses are, etc. Without some kind of structure to subscribe to, all we have is random, pointless tomfoolery -- where we could indeed have had a story. (Golly gee, an actual story, imagine what kids could have done with that!)

Here, when Bachchan scares the kids, his mission should be fulfilled and he should be brought back to BhootLand unless we’re given a caveat, but no, things roll on.

As a ghost, Bachchan seems oddly omnipotent while he helps out other, less proactive ghosts.

Up in BhootLand, some table-tennis rackets float in mid-air and play, but what’s the point of being invisible to other ghosts, in a world populated exclusively by ghosts doing all the pinging and ponging?

Why does BhootLand, a world of apparent immortality, look like a dismal old-age home? And if one can indeed live like Bhoothnath does -- without restraint, sanction or any noticeable difficulty -- then isn’t that a far more pleasurable alternative to waiting for reincarnation?

I bring all this up because children know better.

There are a fair few amusing gags in the first half, and the film has a cast solid enough to make even the feebler scenes work.

The kid, Akhrot, is played by the young Parth Bhalerao, who is a far cry from the cutesy children populating our cinema, a confident boy who talks irreverently tongue in cheek, and handles the role well.

Sanjay Mishra essentially plays Annu Kapoor’s role from Mr India, Brijendra Kala is always fun to watch, and Boman Irani rounds off all the Raju Hirani deja-vu the film tries so hard to conjure up.

Bachchan, of course, is Bachchan and while this is the kind of role that hardly challenges the veteran, it gives us yet another opportunity to marvel at that man, still going strong, and his wonderful baritone.

Despite the hiccups, the film is relatively strong up until midway, when suddenly, without warning, it turns into a poor-people montage, a bewildering collection of moments showing poverty and riots -- set to song, no less -- and ending in a bunch of stills of people pushing carts and pulling rickshaws and looking perfectly happy with their lives, if a trifle puzzled by the photographers.

One of the fundamental issues with a film like this, ostensibly made for children, is the fact that it shouldn’t be allowed to be two and a half hours long. The kind of English film Bhoothnath Returns wants to be would be 95 minutes long, at most, and wouldn’t have had its narrative impeded by song sequences.

Ask yourself, dear producers, about the attention span of a 10 year old and just how much s/he might care about songs that don’t advance the narrative. About melodrama. About, in the case of this misfire of a film, long televised debates (yes, with an empty chair) that might make a couple of decent, unsubtle swipes at politics today but at this point the film’s stopped caring about the children.

The way to reach children -- or indeed, any audience -- isn’t by making a comedy preachier, it’s by doling out your message earnestly but with a light touch. (Know anyone who stopped smoking because of Mukesh? What about religious relatives who confessed to having their eyes opened by OMG Oh My God? See the difference?) A spoonful of sugar, and all that jazz.

There are a few laughs, sure -- Anurag Kashyap has an cleverly-cast cameo (even though he looks to be wearing a mask of himself grinning) as a writer who has issues with the system -- and the film makes a lot of points, some of which are thought-provoking, some cloying and obvious, but it never fulfills the promise the idea holds.

Bhoothnath talks of how the Finns elect cartoon characters, and while we do indeed wish we could pick Chacha Chowdhury over, say, Akhilesh Yadav, the characters mentioned are all far more fun than this eventually unending film with the hackiest climax of all.

And all this while ignoring the basic questions, like what a ghost would pick as an election symbol. Now that’d be a conversation worth hearing.