'Reluctant Fundamentalist was not directly inspired by 9/11' 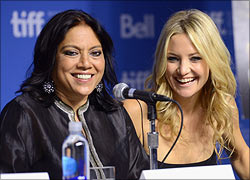 Mira Nair's latest film, The Reluctant Fundamentalist, is said to be a thriller. Adapted from Mohsin Hamid's international bestseller of the same name, the film set in America and Pakistan is much more, of course, but it does have several edge-of-the-seat scenes.

The famed director has described it as her most difficult film in terms of raising money since Salaam Bombay some 30 years ago.

The film revolves around a young and ambitious Wall Streeter (the magnetic Riz Ahmad) who returns to Pakistan from America after 9/11 and gets caught in the fundamentalist crossfire.

"It is also a film that asks the questions, who am I, and what should I do," Nair said at a press conference at the Toronto International Film Festival. The event was attended by actors Kate Hudson, Riz Ahmad and Kiefer Sutherland.

In a crucial scene in the film, Changez (Ahmad) meets a publisher in Istanbul who is forced to sell his firm to an American company. The older man asks Changez if he had heard of 'janissaries'. That was a long time ago, the older man says, when the advancing Turks would take young Christian boys from their parents across Europe, adopt them, convert them and after a few years send them to fight their own people. 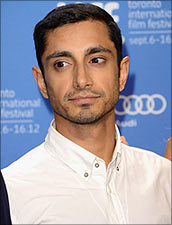 Though Changez is not forcibly taken to America -- he is, in fact, the son of a poet in Lahore and had gone to American to study and pursue the American dream -- the talk about janissaries has a profound influence on him and plays a key role in making him think of going back to Pakistan.

Nair recalled how exactly 11 years ago she desperately sought news of her friends in New York during the Toronto film festival for the North American premiere of Monsoon Wedding. And now she was in town to promote her new film which has 9/11 as one of its characters.

But she did not get into the project because of its 9/11 connections, she said.

"In truth, the film was not directly inspired by 9/11," she said. Instead, it was a visit to Pakistan that moved her to make a film based on "a brilliant mind-game of a book."

Her father's family had migrated to India from Lahore, she said, adding that she learned a lot about Lahore's culture and literature from him. .

Nair did not disclose how much the film cost but it is believed to have been made for about $15 million and was funded by a Doha financing agency. Nair shot much of the film in India and America, a few scenes in Turkey, and plenty of external shots of Lahore.

"I am known as a bulldozer and I get a film done in about two years. But this time it took six years to get the script ready, raise the money and shoot the film," Nair said.

"I just knew I had to do it," she continued, adding that there is "an increasingly sad divide between the East and the West" that makes fresh dialogue necessary.

Kiefer Sutherland said the script was compelling. "For me personally, I had a very visceral and immediate reaction which was incredibly positive. Now, more than a decade after 9/11, people can and should examine the collateral damage of that event.

"This is the first piece that I had read that addressed that. No one was having this discussion that Mira was promoting through this film. So many unfortunate things have happened because of great misunderstandings, whether religious, cultural or nationalistic. But this film addressed that. So, for me, it was a very exciting opportunity."

Hudson plays a well meaning American artist whose one act creates a profound distance between Changez and her.

"When I first read the script, I saw it as an enormous challenge for a filmmaker. Knowing that Mira was going to be at the helm of it, I knew that it was going to be extremely provocative and delicately woven. I just wanted to be a part of her being able to tell that story," Hudson said.

Nair, who loves exploring cross cultural subjects in her films, said she was inspired "to find something that would be a bridge-maker" and that would end "this myopia that we have of the other side -- both sides!"