'I know this movie will be a superhit -- not because it's a Rs 600 crore budget or because we worked hard for more than three years on it.'
'It's because some movies have magic and some don't.'
'This one has that magic.'
A Ganesh Nadar/Rediff.com reports from the Satyam theatre in Chennai. 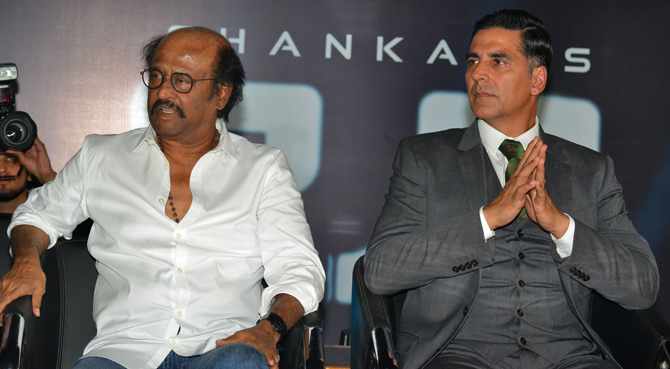 Indian cinema has probably never seen a trailer launch as spectacular as this.

Chennai's Satyam theatre has 1,255 seats, and each of them was occupied. Another 250 people were on their feet.

There were banners outside the theatre, like we would see on a film release.

BMWs and Mercedez Benzes drove up to the red carpet laid out.

A camera focused on the red carpet, and its images were screened on two screens inside the theatre.

Each time a celebrity arrived, the fans screamed! 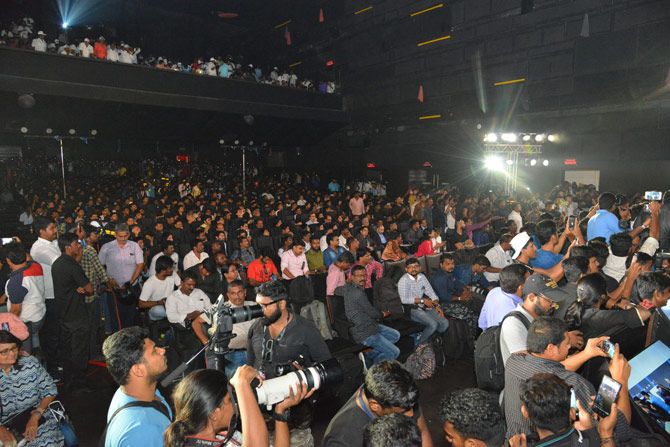 Amy Jackson's tweet arrived before her. Just after 9 am, she tweeted, 'Chennaiiieee' and we realised she had landed.

She was dressed in a white shimmering dress with a head band.

Director Shankar was in his trademark jeans.

A R Rahman tried to remain as invisible as possible.

Akshay Kumar, Oscar-winning sound magician Resul Pookutty and producer Subhash Karan were also present, and yet, one man overshadowed them all.

He stepped out of his car at 10:35 am and as his image flashed on the screen, the crowd went berserk!

Rajinikanth wore a white shirt and blue jeans, and was accompanied by his family. 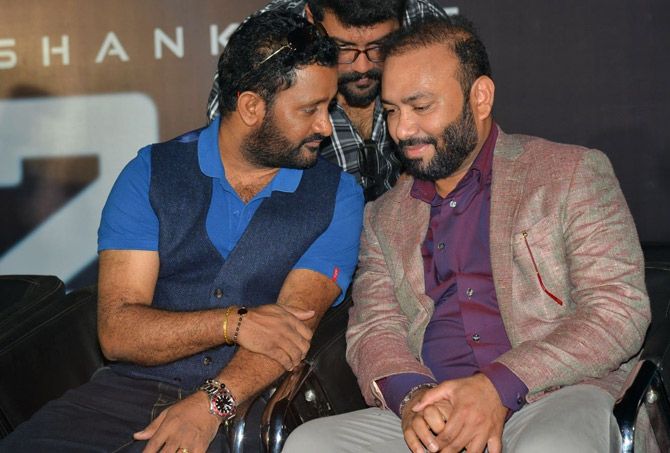 Then, it was time for the 3D trailer.

Shankar welcomed the audience, and then made way for Resul Pookutty.

"This is the first time in world cinema that we are using 4D sound in a 3D movie," Resul said.

Shankar explained: "You are used to having speakers around you, even in the ceiling. For the first time, we also have speakers below, so you can even hear a person walking in the movie."

The trailer was played again -- in Tamil, Telugu and Hindi -- and we were asked to pay attention to the 4D sound.

"When Shankar came to me with the story four years back, I didn't ask him how he is going to do it because I know he always finds a way," Rajinikanth said. 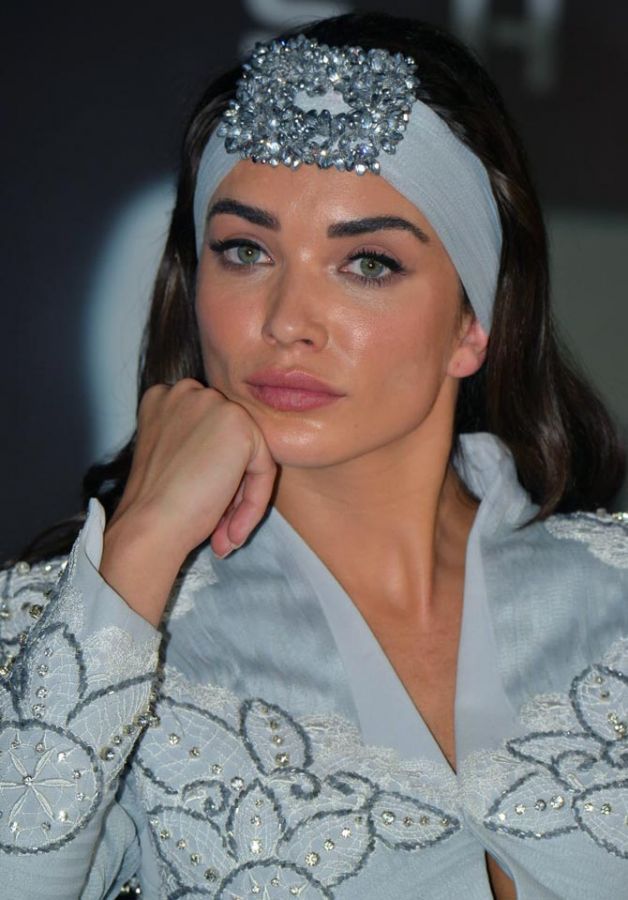 Amy Jackson is not new to Tamil Nadu; she made her debut in the Tamil movie Madrasapattinam, a period drama set in 1947. It was a hit.

Romancing Chitti in 2.0, she said with a smile, was fun and a new experience.

But moving around in the robot uniform was difficult, she added. 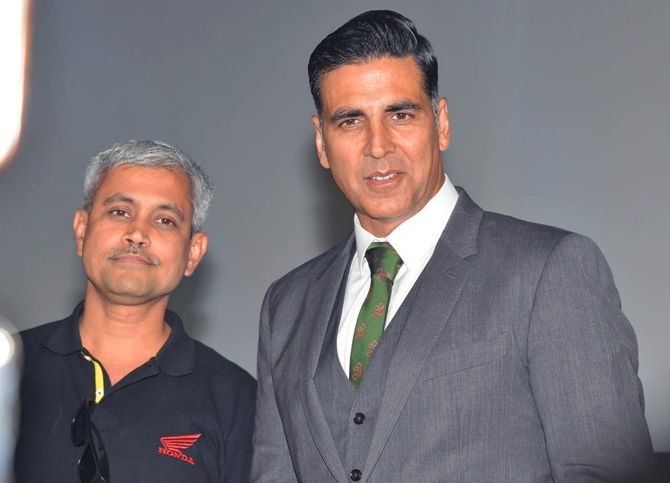 "Vanakkam, Magilchi! (a line made famous by Rajinikanth in Kabali)," Akshay Kumar declared.

"I have been in the movie industry for 28 years, and in this one film, I have put on more make-up than all my movies put together! It was painful, as it took three-and-a-half hours to put it on and an hour-and-a-half to take it off. But after seeing the end product today, I feel it was worth it," Akshay said.

As the key players of 2.0 sat on stage, several film folk asked them questions on video.

Tamil actor Vishal asked Akshay how he managed to wake up at 5.30 am every day and exercise.

"I don't get up at 5:30 am; I get up at 4 am every day," Akshay replied. "I have seen the sunrise every single day of my life. I love working out. I don't see it as exercise or as a task. For me, it's the way I have been brought up. My father was an army man and he taught us to exercise early in life."

Akshay had some advice for Vishal: "I heard that you don't eat rice or idli or dosas and that upsets your mother. Once a week, please eat rice, idli and dosa just to make your mother happy. It will not hurt your diet." 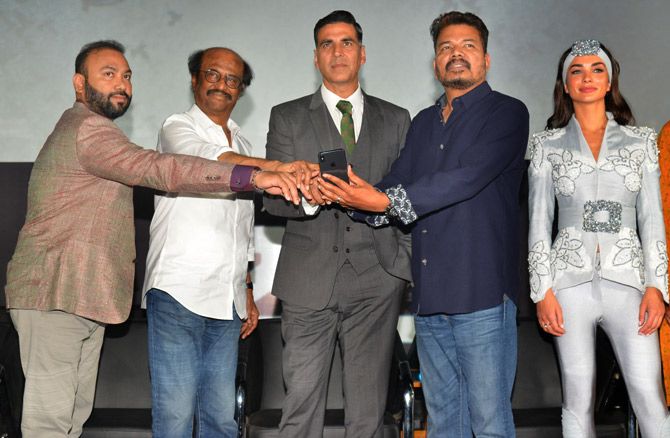 The 2.0 marketing team had shot a video with Kamal Haasan who wished them luck and was sure the film would be a super hit as Sankar worked very hard. Rajinikanth returned the compliment and said Kamal's Indian 2 would also be a superhit.

Baahubali Director S S Rajamouli asked Shankar, "How do you handle the pressure of such a big budget (project) as well as the pressure of meeting the expectations of Rajni's fans?"

"You are also a big budget director who inspires us," Shankar replied. "As for handling stress, the more the stress, the harder I work."

Action director Selva recounted an interesting anecdote while shooting the film: "I noticed that the Superstar had hurt his knees. I told him he should see to it, but he wanted to complete the shot first. After that,I went to Shankar and told him that Rajini sir was bleeding."

Shanker took over: "We lifted his pants and saw there was a two-inch tear on his knee and it was bleeding. Still, he wanted to complete the shot. I coaxed him into going to hospital."

"The next day, when he came on the sets, he told me, 'Thanks for pointing it out, I needed four stitches, I should have attended to it immediately'," Selva said. "His humility is amazing. He used to talk to us and the assistant directors to clear his doubts."

Kajal Aggrawal asked Rahman about his consistency. "For me, music is the gift of God," the Maestro responded. "I create music for my father and God; they set the standards, not me."

Who was his favourite hero?

"Superstar, and I will tell you why," Rahman replied. "I wanted to retire at 40, as I had started working at the age of 11. One day I saw him on the sets and thought, 'My God, if he has so much energy at his age, I can work for a few more years." He has always been my inspiration."

"You are a good actor-director, you don't need tips from me," Shankar replied. "But I will tell you an advice I follow: Don't use your favourite director, music director, hero and heroine for every project." 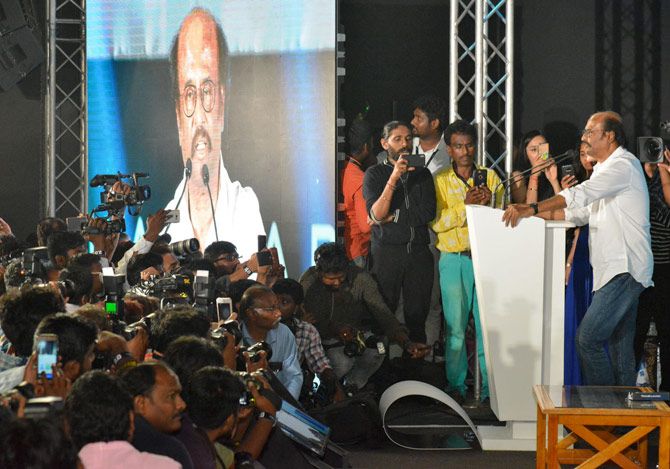 Finally it was the turn of the Superstar to speak.

He spoke first in English for the journalists who had flown in from Mumbai, then in Tamil for the local journalists.

"My brother, who brought me up and forgave all my mistakes, is here. I am very happy because of that," the Superstar revealed.

"I know this movie will be a superhit -- not because it's a Rs 600 crore (Rs 6 billion) budget or because we worked hard for more than three years on it. It's because some movies have magic and some don't. This one has that magic."

"There is action, there are thrills and there is an important message."

"I know a lot of people complained that we have delayed this film, but I would like to say that though we are coming late, we are coming at the right time."

"Though we are late in hitting the target, we will hit it," Rajinikanth declared as the audience cheered loudly. 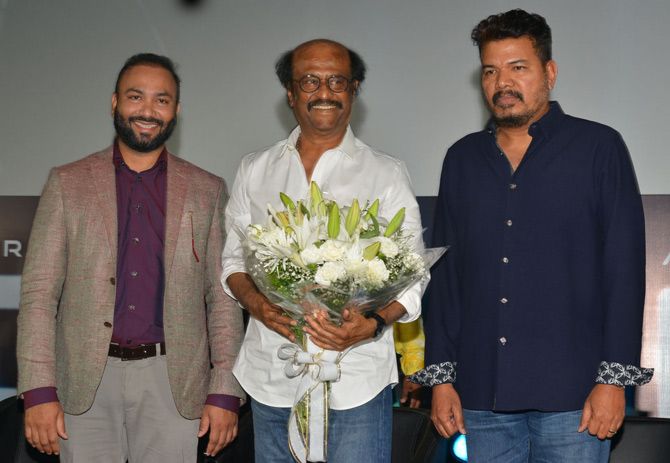 "After about a fortnight of shooting, one day I was not feeling well. That robot uniform weighs 12 kgs and I could not remember my lines. I sat down wearily and told Sankar, 'I don't think I can do this, please take back the advance and also all the money you have spent so far I will return it, please drop me'."

"Shankar told me, 'You have fever. Go home, rest and come back whenever. I am making this movie only with you'."

"On another occasion, we had a 40-day shoot at the Jawaharlal stadium in Delhi. There were thousands of extras and junior artists. I had just come from shooting Kabali in Malaysia."

"I was not feeling well, but I decided to shoot because of the huge budget. After a couple of days, I could not. My body was tired."

"He is the true friend I will always treasure. I rested, and then completed the movie." 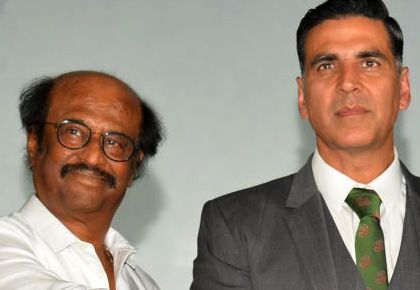