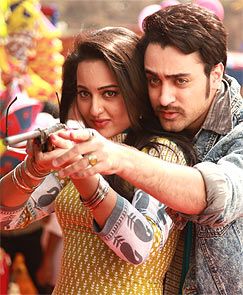 Akshay Kumar makes some of those lines work, but things have gotten far worse this time around, notes Raja Sen

Not very long ago, I rhapsodised about the words Once Upon A Time, and how a recent movie shone light upon them in rather sublime fashion. This week, a film releases with a name that starts with those very words and then makes a mockery of them. Once Upon A Time In Mumbai Dobara is effectively, of course, Twice Upon A Time.

Now, having walked out of this new Milan Luthria film, I wish they had gone with the Twice Upon title -- if only because of how convenient it would be to call it T.W.A.T: The Movie.

The first Once Upon A Time In Mumbai was -- while not a good film by any stretch of the imagination -- a tolerable throwback to the dialogue-laden movies of yore. Things have gotten far worse this time around, with characters talking exclusively in the sort of aphoristic couplets found on auto-rickshaw stickers. Akshay Kumar makes some of those lines work, but the rest are beyond redemption.

What is most upsetting is how the vital lines flounder the most: unrelated inanities pop up throughout, but it is when the script actually demands a line with some heft that there is none to be found. It is as if the writers copy-paste lines from railway station shayari books whenever they can, but at times of actual dramatic punch, nothing fits.

Except, that is, Akshay Kumar. Kumar -- despite his preparation for this film consisting merely of picking out the right pair of sunglasses -- relishes playing villain. He says as much, too, in a rare good line about how the Hindi film hero only enjoys the final reel where things end happily while the baddie lives it up throughout the film.

And so his Shoaib Bhai smokes and slithers and, for some reason, taps chairs repeatedly on the floor till he gets the attention of the room. A dreaded gangster, Shoaib is most impressed by those rare ones who stay impudent to his face -- even after learning that those folks have no idea who he is, and seeing them cower like everyone else when apprised of his omnipotence.

One such character is the film's heroine, Jasmine, a thickheaded young actress with wide-eyes and a tendency to misconstrue

most everything said to her. Sonakshi Sinha, who plays this exasperating actress, is quite wasted in this role -- playing dumb to comedic effect isn't up everyone's alley -- and a scene near the finale has her screeching like a possessed banshee. Why gangsters in our films fall for the most psychotic of women is, however, the story for another day.

For now, a much more relevant question would be just what purpose Imran Khan serves in a movie like TWAT. Sure, Kumar's a bad guy and there needs to be a hero in a film this formulaic, and I get that this film is ostensibly a love triangle, but so entertaining is Kumar's swagger and so feebly does Khan deliver his lines that even if Khan's character were completely excised, it wouldn't hurt the movie an ounce. In fact, since it'd considerably trim the seemingly unending 160-minute running time, it'd be a massive plus.

Shoaib is an all-powerful don who plagues Bombay with ease, getting rid of all who stand in his way. Imran Khan's Aslam, a youngster Shoaib scooped off the streets a dozen years ago, is one of his most trusted men. Somewhere down the line, however, both men committed to life without love fall for the same girl. Ta-da. The film is constantly predictable -- just like the first film in the series -- but leans too heavily on a very hackneyed romantic angle. It isn't often one gets to say this about a Bollywood actioner, but a few more gunshots could have been nice. Kumar more than makes up for the lack of Devgn, but despite having a similar first name, Imran really can't match up to Emraan.

It is nice, however, to see Tiku Talsania and Sonali Bendre back on the big screen, albeit in small roles. (Though neither gets as inexplicably thankless an appearance as the lady from Luthria's Dirty Picture.) Also enjoyable are a Kapil Dev lookalike who clouts a cricket ball quite like the Haryana Hurricane used to (even though when this one hits it in the air it stays there for a few minutes before reaching the fielder), and, on a related note, the sight of the once-ubiquitous Rapidex English Speaking Course books.

The rest is nonsense. No, worse: expensive nonsense.

In the film's finest scene, when there is an all-points bulletin for Shoaib's arrest, the gangster, fed up by the police, strides defiantly into a police station and is... well, utterly ignored as he stands there and walks out again. Typical. We never quite knew what to do with our stars.

Image: A scene from Once Upon A Time in Mumbai Dobaara