A peek into the Big B's life.

Amitabh Bachchan is one of the most photographed celebrities of the film industry but there have been many moments in his life that have remained private.

The Big B has shared some interesting unseen pictures from his life on his official Facebook page, with some informative trivia.

We celebrate his 72nd birthday on October 11 with these beautiful moments. 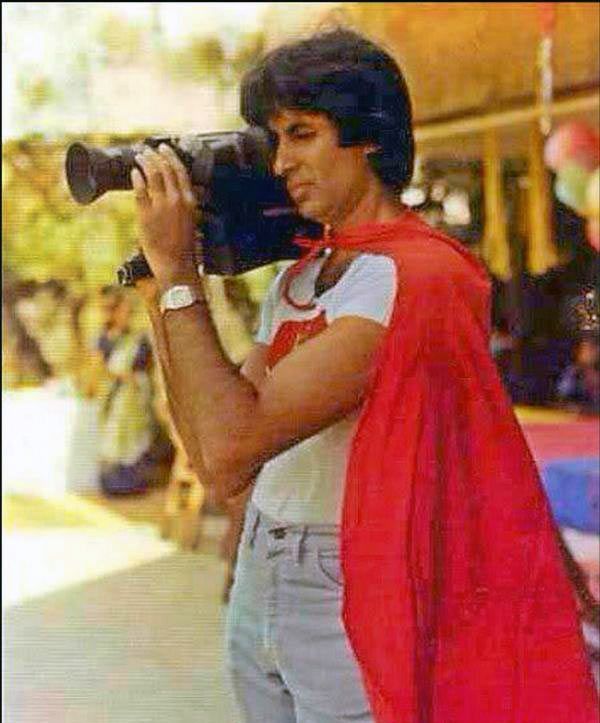 Amitabh Bachchan gets into superhero mode for his son Abhishek's birthday party.

'And this at Abhishek's Superman party in Prateeksha, long years ago ... filming the proceedings .. those days the 8mm camera was a delight .. after filming, it had to be processed, then it could be seen only on a projector .. on a white wall or a white screen .. AND NOW ..shoot on mobile and watch immediate !!Times they change,' Bachchan writes. 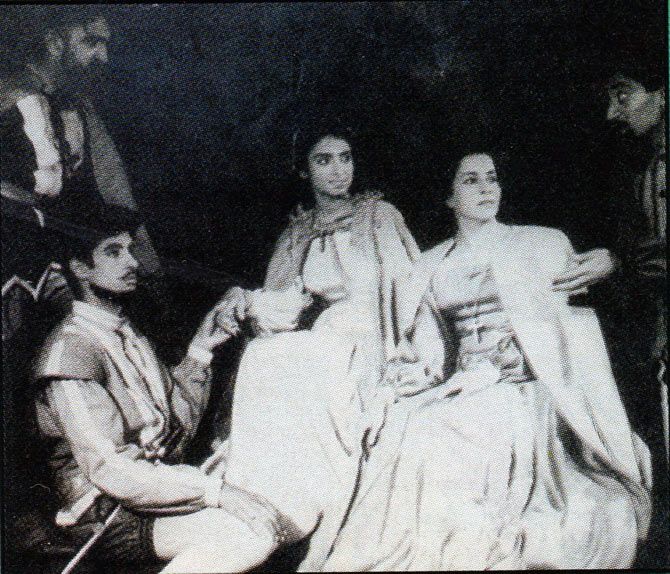 Image: A picture of a play, starring Amitabh Bachchan, during his college days

Amitabh writes: 'A picture that speaks much .. it is the Hindi production of 'Othello' staged by us in Delhi .. My Father's translation and Mother and son acting in it.

'Here my Mother that played Desdemona's maid, and the skinny lad that wears yet another false beard on knee is the AB playing Cassio .. Neera Kukreja played Desdemona in the picture too ... and Ashok Rampal, Iago on the right ... such fond memories of the IFACS theatre in Delhi.' 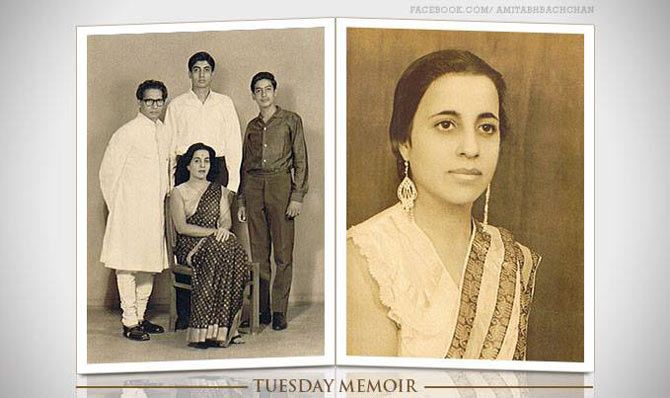 Image: A photograph of Amitabh Bachchan with his his parents, Harivanshrai and Teji Bachchan and brother Ajitabh

Amitabh Bachchan wrote a moving tribute on his Teji's birth anniversary: 'My Mother Tej Kaur Suri, before marriage, was just 3 months old when her Mother passed away. She never did ever experience the joy and care and the most important company of a Mother. She never knew what a Mother was ! Is that in some way indicative of how dear a Mother she herself became, when we were born ? I often wonder, as does my Father in his autobiography!' 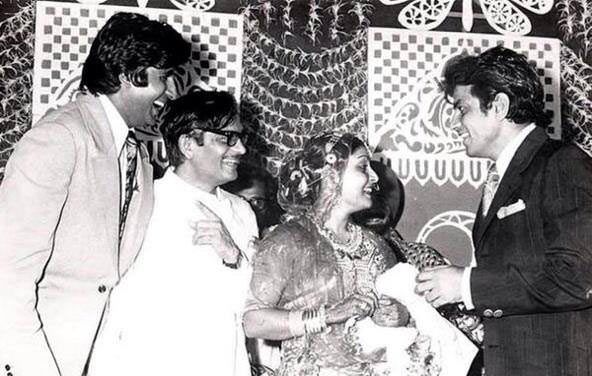 Image: Amitabh Bachchan and Jeetendra at Gulzar and Rakhee’s wedding

'What an old and memorable picture ... the wedding reception of Gulzar and Rakhee .. and Jitendra cracking us all up,' he writes. 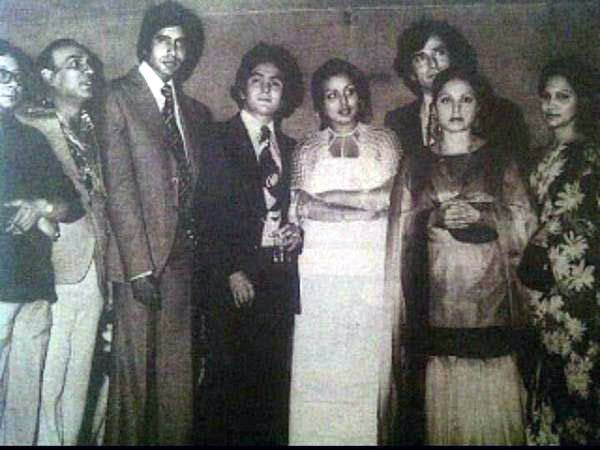 'The premiere of 'Kabhi Kabhi' and what a line up .. those days will never be forgotten .. we shot most of the film in one schedule in Kashmir .. in one month !! 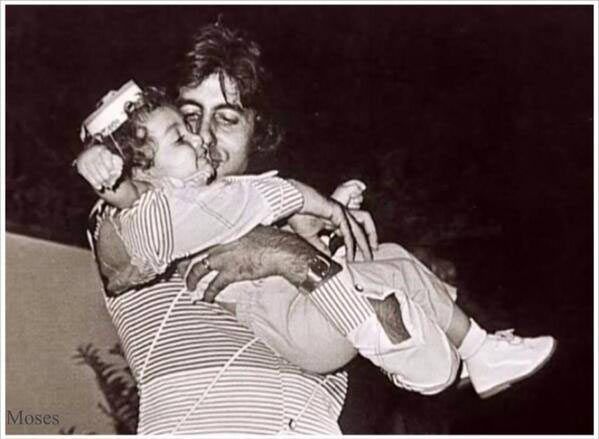 Just a few days after the release of Dhoom 3, an emotional Amitabh Bachchan posts a childhood photograph of Abhishek and writes, 'And this little fellow Abhishek is now in it .. never imagined this would be so ...never imagined he would become what he is today!'

He writes, 'At the song recording of 'ABHIMAAN' .. one of the finest music on film .. the great SD Burman, Hrishi da, Majrooh Sultanpuri, and the nightingale Lata ji ..!!' 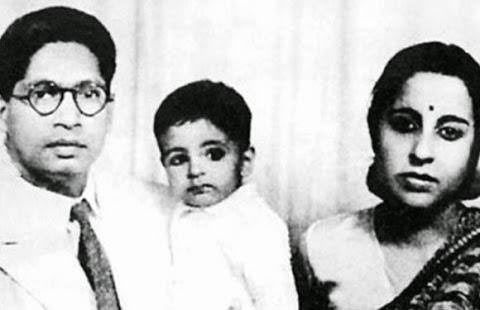 Image: Amitabh Bachchan with his parents Harivanshrai and Teji

A young Amitabh Bachchan with his parents, Harivanshrai and Teji. 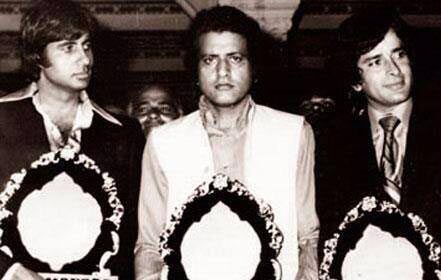 'The jubilee function of Roti Kapda Aur Makaan, my film made by Manoj Kumar ji .. these days there is no concept of jubilee .. its all finished and over in the first 3 days. Here a keepsake picture .. with Manoj ji and Shashi Kapoor,' he writes. 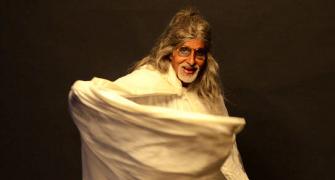 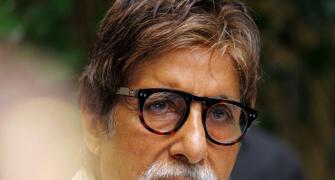 PIX: Have you noticed Amitabh Bachchan's eyes before? 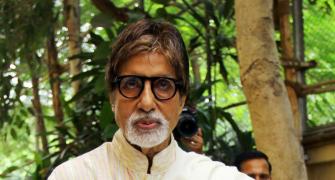 Amitabh Bachchan: I will try and work till my last breath 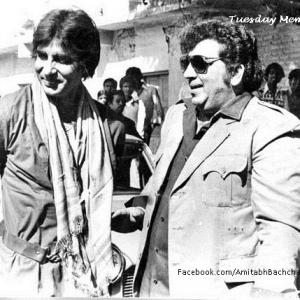 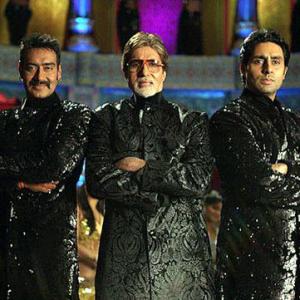 Birthday special: When Amitabh Bachchan set the stage on FIRE