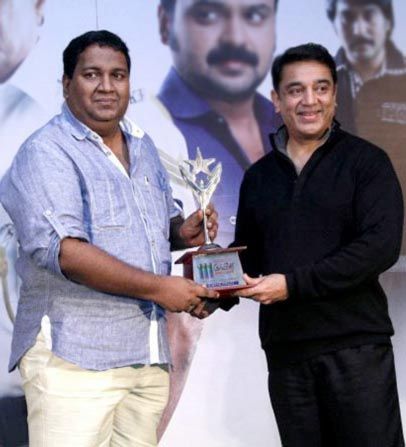 Rajesh Pillai’s sudden death at the age of 41 has sent shock waves across the Malayalam film industry. He passed on February 27, a day after the release of his last film, Vettai.

While there have been conflicting reports about the reason behind the premature demise of one of Malayalam cinema’s most promising directors, Kamal Haasan lays the blame squarely on the filmmaker’s addiction to aerated drinks.

Says Kamal, "We should not romanticise the facts or hide the truth just because the man is no more. Nothing is forgiven because some one is dead.

"I liked that overweight, intelligent guy. He was a friend and my associate Rajeev Kumar's assistant director. I had great hopes for him."

"No wonder gluttony is condemned in every religion.  His cirrhosis was not alcohol-induced. This guy ate burgers and drank aerated drinks as if his life depended on it."

Kamal says Pillai’s death should serve as a lesson to all who guzzle aerated drinks. "I can say so much as encomium for his debut film but a better message awaits through the late Mr Rajesh Pillai: please don't mimic eating habits enforced on us by avaricious merchants. Watch and know what you feed on. Animals in the Serengeti know better. I wish Pillai had died in pursuit of a difficult film instead of a simple habit to kick. A lesson for my modern Malayali brothers and sisters."

Kamal Haasan says he was planning a film with Pillai. "I was planning to remake his Traffic in Tamil. I went to their 100th day celebrations. I sat with Pillai and my writer friend Sanjay. We almost were about to start when the producer wanted more as his share to make it in Tamil. My production company, Raj Kamal Films, backed out and they made the film in Tamil with someone else."

"Sanjay told me Rajesh was hospitalised and had withdrawal symptoms from excessive aerated drinks. I thought it was a joke. I sent word to Rajesh Pillai to get his act straight and get back to work. He did manage to make a film after that but the damage was done."

Kamal Haasan is deeply saddened by the fact that Pillai is no more. "Some might say at least he died doing what he liked best. I think he liked making films more. But he couldn't get his priorities right. A few more years of work and I am sure I would have had a lot to say about him. He has denied me that opportunity."