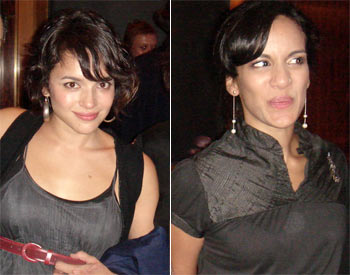 No, you aren't seeing double. Look closely. The lady on the left is perhaps America's leading vocal chonicler of the matters of the heart, someone who won five Grammies for her debut album, Come Away with Me.

She was at New York's Carnegie Hall last weekend to hear and cheer her dad and half-sister, the lady on the right. Both sisters were nominated for a Grammy in 2003.

Still haven't figured who we are talking about? Sigh.

Singer Norah Jones is the pretty sight on the left; sitarist Anoushka Shankar is the cutesy on the right. Their pa, the legendary Pandit Ravi Shankar, who turns 90 in April, isn't in the frames.

The George Harrison Fund for UNICEF, which hosted the post-concert reception, later honoured Panditji with its humanitarian award for social consciousness. Panditji was friendly with all the members of the Fab Four -- John and Paul, George and Ringo -- but his friendship with George endured till Harrison fell prey to cancer in November 2001.

Norah -- who has sold more albums (52 million worldwide!) than any lady jazz singer this decade -- will release her fourth album The Fall on November 17. We can't wait to hear it. 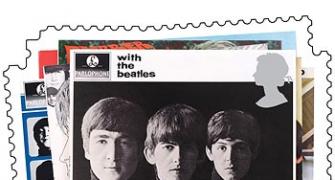 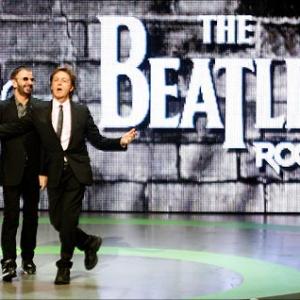 Now, you can play with The Beatles!