'It was only after D-Day that people believed that I had actually directed Kal Ho Naa Ho.' 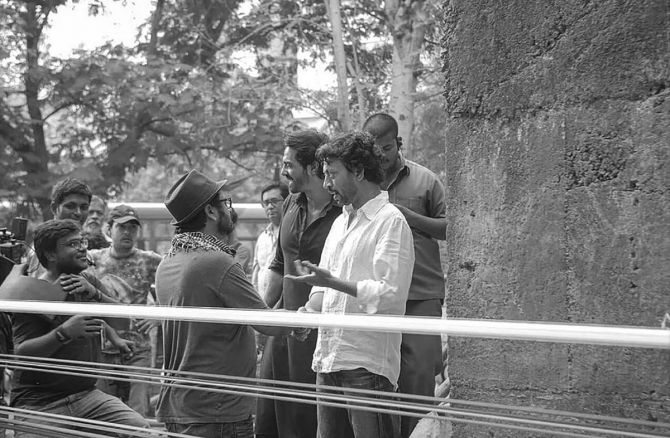 IMAGE: Director Nikkhil Advani with Arjun Rampal and Irrfan Khan on the sets of D-Day, arguably one of the finest Bollywood thrillers made in the 21st century. Photograph: Kind courtesy Nikkhil Advani/Instagram

In a career spanning 25 years, Nikkhil Advani has moved from romances like Kal Ho Naa Ho and Salaam-e-Ishq to gritty dramas inspired by real life: Airlift and Batla House.

Nikkhil is all set to unveil a medical drama series this week set against the backdrop of the 26/11 terror attacks, Mumbai Diaries 26/11.

"We had initially titled the series Bombay Hospital. But when the Taj Mahal Hotel, the cops, the media, the city of Mumbai and the resilience of its people entered the picture, the show became much bigger and we decided to call it Mumbai Diaries 26/11," Nikkhil Advani tells Rediff.com Contributor Roshmila Bhattacharya. 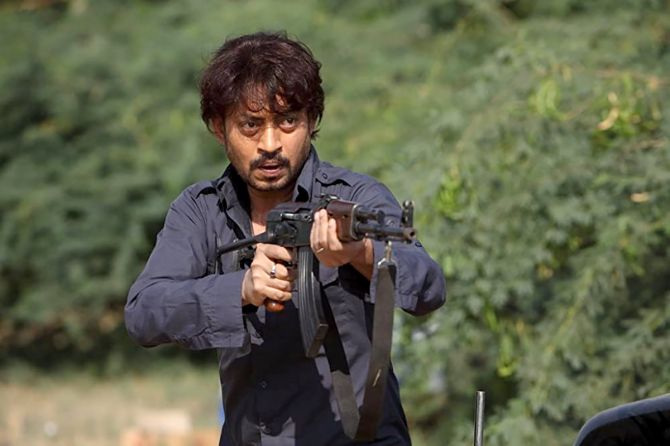 D-Day was so out of the loop for me that no one thought I could pull it off.

I had to get Anurag Kashyap to convince Irrfan (Khan) to even listen to the script. He agreed only after he was told that I'd trained under Sudhir Mishra and eventually agreed to play undercover R&AW agent Wali Khan.

I had approached Rishi Kapoor for Ashwini Rao, the head of R&AW.

He told me that after Patiala House, I should offer something with more gravitas.

He showed me some pictures from Agneepath in which he was playing the baddie, Rauf Lala, a don who runs a meat business and simultaneously, deals in drugs and prostitution. That set me thinking, why don't I go against type and cast him as Goldman, a character modelled on Dawood Ibrahim?

He laughed when I told him this.

We did a look test, and he said yes.

I'd really prepped up for the shoot.

On the first day, I wanted to take 50 shots and I had them planned from every angle.

Irrfan pulled me back, pointing out that with a film like this, we should go with the flow.

His words stayed with me.

'After Rishi Kapoor and Irrfan passed away within 24 hours, more people watched it' 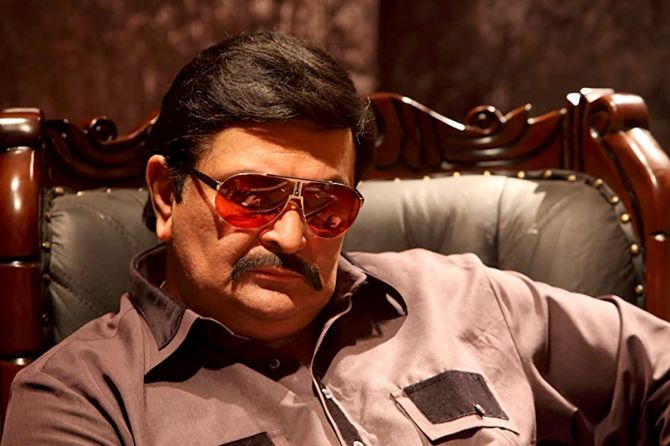 Today, I work really hard on my research and script, but when I go to shoot, I know what I want to do but I also let my actors tell me what they want.

That way, it's more organic and I'm more relaxed.

Those days, I didn't have Dolby or steadicam.

We were shooting with a hand-held camera.

I'd seen a two-part documentary, Secret Pakistan, and I adopted their style of filming which was real, grungy and gritty.

We did not have a budget for promotions so I decided to organise screenings for the film fraternity.

A special moment was when Amitabh Bachchan saw it and wrote a long post praising D-Day on social media. Soon, other actors were calling to ask if they could come for a screening and their reactions were heartening.

The film did not do well when it opened, but over the last eight years, it has been building a reputation.

After Rishi Kapoor and Irrfan passed away within 24 hours, more people watched it.

For me, it was only after D-Day that people believed that I had actually directed Kal Ho Naa Ho.

'When Raja narrated the script to Irrfan, he said it needed a bigger star' 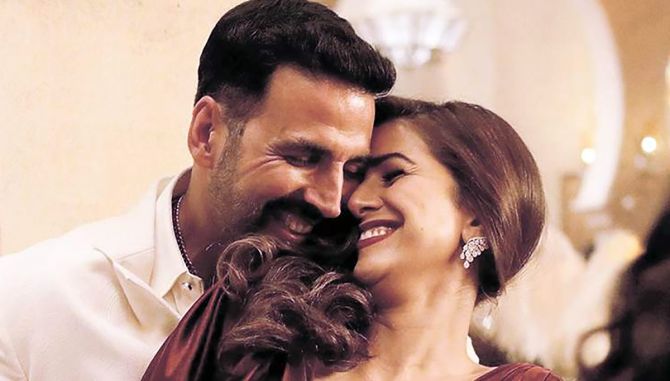 When Raja (writer-director Raja Krishna Menon) narrated the script to Irrfan (Khan), he said it needed a bigger star.

'You won't get the budget you need if you make the film with me,' Irrfan pointed out magnanimously.

I had worked with Akshay (Kumar) in Chandni Chowk to China and Patiala House.

While chatting, I told him about Airlift and he was instantly excited.

When I pointed out it was not in his space, he argued that he'd done Baby and was looking to experiment.

So I got Raja and Akshay together and the result is an amazing film based on the real-life evacuation of 170,000 Indians from Kuwait during the first Gulf War.

The heroes of Airlift are also its writers: Ritesh Shah, Suresh Nair, Rahul Nangia and Raja, along with my team of producers which includes my sister, Monisha Advani, and her business partner, Madhu Bhojwani.

I'd pulled Monisha and Madhu into D-Day because no studio would back it.

They backed me on Airlift too and together, we have made Emmay Entertainment a credible production house today. Uday Shankar and Saugata Mukherjee of Star TV came to me after watching D-Day with the Israeli television drama series, Hatufim (Prisoners of War), which had been adapted as the American series, Homeland.

I wasn't interested in an Indianised Homeland, but I thought Hatufim could work with the Israel-Palestine conflict transmuting into the India-Pakistan conflict and two POWs, missing after the 1999 Kargil War, breaking out of a Pakistan jail to return home after 17 years.

We had initially planned it as a two-season series of 13 episodes each.

In retrospect, I feel if we had stuck to that plan and not extended it over 100-plus episodes, it might have worked better.

Still, because of the reach of television, a lot of people saw P.O.W. even in the 10 pm slot. And that has helped me with Mumbai Diaries 26/11 today.

'John's problem is that he is so good-looking' 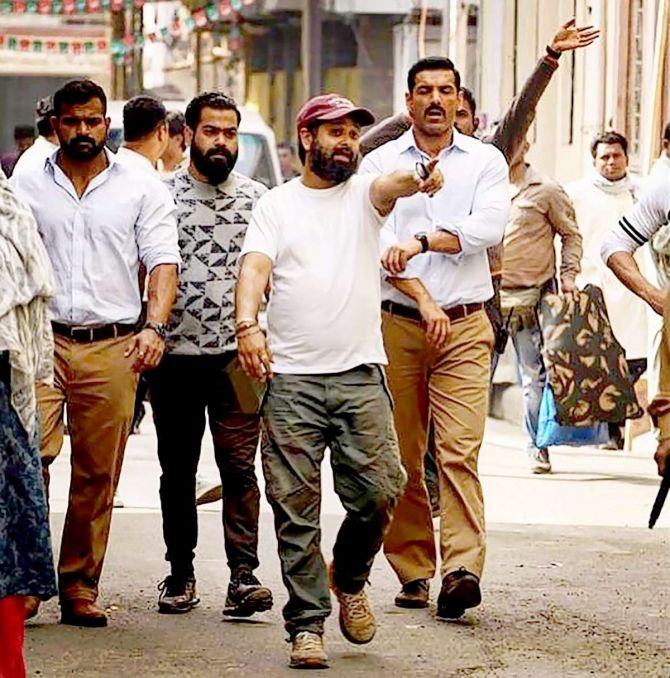 Even though we had done Salaam-e-Ishq earlier, Johh (Abraham) and I really bonded during Satyameva Jayate.

As the producer, I was on the set all the time and we chatted about our respective production houses and our desire to tell different stories.

Our love for football cemented the bond. He has his own football team, NorthEast United, and I'm an ardent Man City fan.

Batla House was a four-year-old dream and after Akshay Kumar and Arjun Rampal, I decided to cast John against type.

John's problem is that he is so good-looking that he has had to live with the model tag for too long.

I played him quiet, underplayed his looks, and when the real Sanjeev Kumar Yadav on whom his DCP was based, saw the film, he was moved to tears.

He told us that we had gone beyond the story of the 2008 encounter and its aftermath, beyond the court judgment, and turned it into a human story. 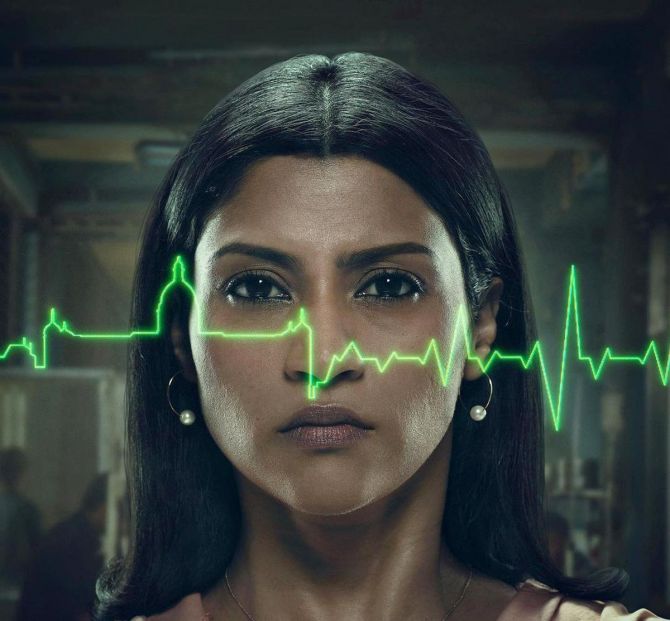 Vijay Subramaniam and Aparna Purohit of Amazon Prime Video came to me after seeing P.O.W.

I didn't want to get into the espionage space again, so we decided on a medical drama that unfolds on 26/11, the day of the 2008 Mumbai terror attacks.

We had initially titled the series Bombay Hospital.

But when the Taj Mahal Hotel, the cops, the media, the city of Mumbai and the resilience of its people entered the picture, the show became much bigger and we decided to call it Mumbai Diaries 26/11.

Every season will deal with a particular disaster situation the city is reeling under.

The eight episodes will play out over 24 hours with the characters we have introduced in Season 1 moving forward to deal with the next crisis.

Mrs Chatterjee Vs Norway (Under production)

'It's a story of patriotism without being jingoistic' 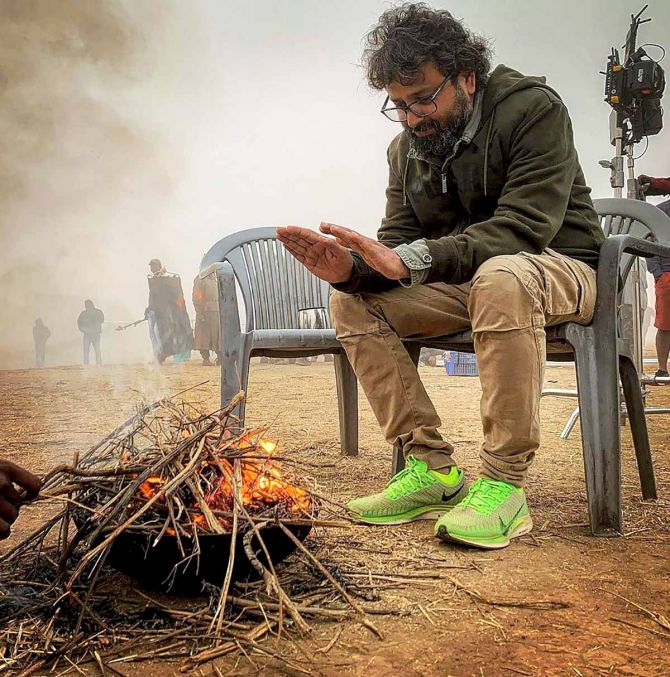 The film is inspired by a 2011 case of a gutsy Indian woman who fights the system to get back custody of her young children after the Norway Child Welfare Service deems her an unfit mother and takes them away.

The minute I read the script its director Ashima Chibber had sent me, I knew I had to make this film.

It's a story of patriotism without being jingoistic.

It underlines the fact that the country you are born in is your only country and will stand up for you.

We've got an unbelievable actress in Rani Mukerji.

Our biggest challenge so far was when to roll because of the pandemic. It was initially scheduled for May, then shifted to June.

It finally took off on August 11 in Estonia.

So far, it's been smooth sailing. 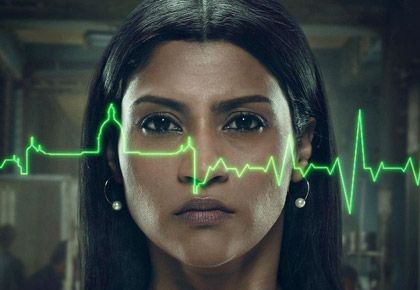