Though Namrata Shirodkar and Aishwarya Rai are the same age Namrata will plays Ash's elder sister in Gurinder Chaddha's Bride And Prejudice. "It doesn't matter as long as I have space to make myself coherent in the plot," Namrata s 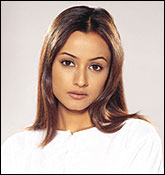 Vivek Oberoi may be Namrata's costar in Chadha's film while Johnny Depp could play the lead against Ash.

Namrata is also excited about Shrey Srivastava's Insaaf, which is based on the Champa Biswas scandal that rocked Bihar a few years ago.

Like Manisha Koirala in Escape From Taliban, Namrata plays a real-life victim in Insaaf, the wife of an IAS officer raped by a politician's son.

The film landed in trouble when Champa and her husband B B Biswas (who passed away recently) filed a suit against the producers. Thereby, repeating the pattern of legal snags confronted by biopics in India, as Shekhar Kapur's Bandit Queen and Dr Jagmohan Mundhra's Bawandar had faced.

The legal hassles have now been resolved but the film has been held up because producer Showman International apparently hopes to get a better price than what is being offered.

Says Namrata, "We completed the film two months ago. We -- Sanjay Suri, Mohan Joshi, Kunika and I -- worked for free on condition that we get paid after the film's release. I saw a portion of the film and it looks aesthetic. There is a rape, of course. But it has been shot sensibly. Rape on screen does not have to be dramatic. We have tried to remain as close to the actual incident as possible."

Sanjay Suri, who starred in Meghna Gulzar's Filhaal, plays Shirodkar's husband. Dino Morea plays the honest cop who helps her get justice. "Maybe it will not be a biopic like Bandit Queen. But it is an honest effort," says Namrata.

Another of her films ready for release is debutant director Sanjay Jha's Praan Jaye Par Shaan Jaye where she plays a wannabe star in a chawl. "It is a very challenging, though small, role. I play a struggling starlet in Mumbai. I hope it will be released soon."

"All of us -- Raveena (Tandon), Divya Dutta and Rinke Khanna -- had great fun during the shooting. There was absolutely no jealousy or rivalry on the sets," she says.

Last year, she got favourable reviews for her performance in Dil Vil Pyar Vyar. "But I wish the film had done better."

On the anvil is another woman-centric film with Mahesh Manjrekar tentatively entitled Shareer which begins where Astitva ended. There is also a promising project with television director Ravi Rai. "I have a special appearance in Khalid Mohamed's Tehzeeb."

"Insaaf gives me a chance to play another challenging role after Mahesh's Vaastav. There have been many female-oriented films of late. My film is neither like Khushi or Satta."