One of India's top filmmakers Satyajit Raj would have been 95 on May 2.

We celebrate him by re-publishing a special series of articles through the week. 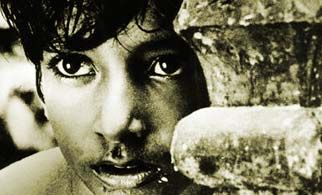 On May 12, Satyajit Ray's first film, Pather Panchali, was screened at the Cannes Film Festival, marking the masterpiece's 50th anniversary.

To celebrate the occasion, Indrani Roy Mitra spoke to Ray's only child, Sandip, who, ironically, was not invited to Cannes.

"It's disappointing that the Cannes Film Festival authorities did not send me an invitation. I would be lying if I say I did not expect it. I wish at least Subir Banerjee (who played Apu in Pather Panchali) and Uma Dasgupta (who played Durga) were invited to be a part of the film's Golden Jubilee," he says.

On Ray, the father

Baba was a workaholic to the core and loved to keep himself busy. His days always started early with a cup of tea before he immersed himself in work.

Baba pouring over a heap of papers at his desk was a very familiar sight. Yet, with amazing skill, he managed to squeeze out time to have a scintillating session of adda (chat) with his friends over cha (tea).

When not shooting, he would have interesting conversations with the family over meals. Sunday mornings would have all of us in a marathon adda session for hours. His colleagues Soumitro Chatterjee (the popular Bengali actor who acted in many Ray movies) and Kamu Mukherjee (the fine comedian) would frequently join us.

Baba had an admirable skill of mixing with people of all age groups. He was as friendly with me as with his contemporaries. We could talk about everything under the sun. He had an insatiable hunger for information and would be all ears to whatever you talk to him.

Apart from being a great filmmaker, writer, music composer and painter, he was a great conversationalist. Conversation, apart from films, used to be our bond of union.

On Ray, the director

I started working with him in 1976. I joined his crew as a still photographer. I was thrilled to see my name in the title cards of Seemabadhha. The world of camera started unraveling its mystery to me.

I learnt to explore the mind of a genius. Learnt to read the thoughts of my father. It was an unfathomable experience. As I ventured into the arena of films and saw a great director at work from close quarters, I realised what went into the making of a film of Pather Panchali's stature.

As age started taking its toll on Baba, he sought assistance from me. I was too happy to comply. From being an assistant director, I got promoted to the post of camera operator for his last three films, Ganashatru, Sakhaprasakha and Agantuk.

He was a very hard taskmaster, a perfectionist. On the sets, his brilliance dazzled all, his commitment to perfection kept them on toes. He was indeed the captain of the ship sans the temperament. He was always cool and always had his way with people. He would want everything in order and will make sure to cross the T's and dot the I's himself. He was pretty easy going on the sets and made sure not to give his colleagues a tough time.

Absolutely clear in thoughts, he never had any problem conveying what he expected from us.

Thankfully, I never had to leave under his shadow. The media was not so active then and I did not suffer from journalists' onslaught. I was spared a quizzical look or an uneasy question at school. I thank my stars for that!

Back home too, I never felt uncomfortable being 'Satyajit Ray's son'. Baba was very simple and down-to-earth, a great friend to spend time with. Our friendship took an interesting turn when we started working together.

Great creations have great moments, and great moments touch all and sundry. I was a toddler when Pather Panchali was released. Yet, I have a faint memory of the pre-production gatherings that would take place at our home at Boral, South Kolkata.

Everyday as people gathered in our house, I could hear the steam engine puffing at the nearby Garia station. I was irresistibly drawn to the huge metal structure purging smoke and would crawl up to the verandah, as if to catch it. Baba, perhaps, read my thoughts. Why else did he immortalise steam engine in this masterpiece? Who can forget Apu and Durga of Pather Panchali running huge distances to get a glimpse of the elusive railgaari?

On the day of release, Ma (Bijoya Ray) had taken me to Basusree cinema. I was allowed to see the film only till intermission. I was angry and cried a lot to have been denied a full view. My cries, however, fell on deaf ears.

Time passed. I aged but the film did not. I have viewed Pather Panchali countless times. And every time, I have had a different interpretation. Neither time nor age could wither its charm. It's a classic, hence timeless.

The film is a conglomeration of several unforgettable moments strung together. It is difficult to make a choice of a few rare moments. Pather Panchali is an artistic reflection of a brilliant mind. It is as eloquent as poetry, as vibrant as a painting.

Its dialogues are so rich. Baba often acknowledged his indebtedness to author Bibhutibhushan Bandyopadhyay for them. They touched the right chord with audience from the very first scene.