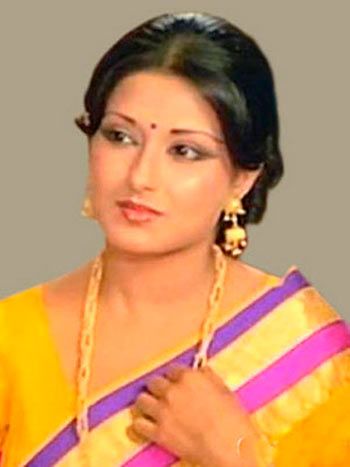 'If Dharmendra saw me standing alone at a party, he would say, ' Where is your husband? Go and stand with him'.'

'I would play with Vinod Khanna's son Rahul and babysit Akshaye.

'I used to call Shashi Kapoor 'uncle' earlier. But when I was shooting for Anari, he told me not to call him 'uncle' because we were shooting for a romantic song and some fans were around.'

Moushumi Chatterjee looks back fondly at her superstar co-stars.

Moushumi Chatterjee gave us a beautiful insight into her life, when she talked about her movies, her famous father-in-law Hemanta Kumar and her life. Click here to read.

In the second part of an interesting interview with the actress, she reveals wonderful details about her star co-stars, and her relationship with them. Patcy N/ Rediff.com listens in.

I was very close to Vinod Khanna and his family. In fact, the first Hindi film I signed was Kuchhe Dhaage with Vinod Khanna. But Anuraag released first.

I was very close to Vinod Khanna's first wife Geetanjali. I would play with his son Rahul the whole day.

Babu and Vinod Khanna would go for parties and we would babysit Akshaye.

Geetanjali was very affectionate and gorgeous. I loved her makeup. Her makeup was new for me.

I liked his second wife Kavita too. When I was shooting for Nishchaay, she would send food for me just like Geetanjali did. I think they are my extended family.

People, who are affectionate towards you, have the right to scold.

Once when we were shooting, an actress complained to Vinod Khanna, 'You always call Moushumi when your dabba comes, you never call me.'

So he called her too. As we ate, she said, 'Don't tell me your wife cooks.'

She said, 'I will starve if there is no food. I don't know how to boil an egg.'

She said that with pride. We were laughing after she left.

I cook for my kids and my husband. I know acquaintances who say, 'My nail will get spoilt if I cook'. What rubbish is that! 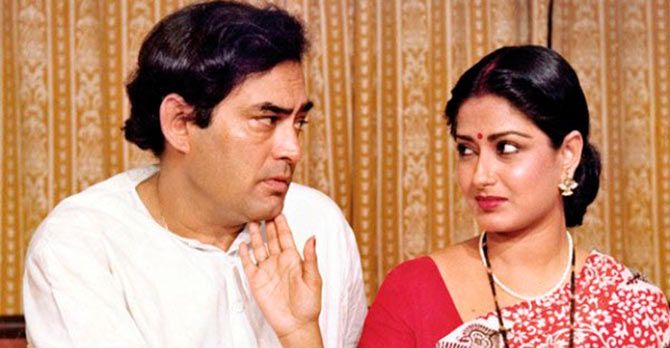 I have done many films with him -- Itni Si Baat, Swayamwar, Angoor... I used to call him by his full name, Haribhai Zariwala.

He lived near our house in Pali Hill (in Bandra, a posh suburb of Mumbai). We were close friends. He was very affectionate and kind-hearted, with a good sense of humour.

He was a Cancerian. My mother, sister and brother are Cancerians, and so are some of my close friends. They are very emotional and sensitive people.

He used to treat me like a child. Sometimes he would come home when my husband and I were going out. He would say, 'You carry on... just tell your maid to cook some non-veg for me. Is there fish in the fridge?'

He would get movie videos, watch them, eat, drink and leave.

There were times he would come very late at night. I had just had Megha (her second daughter) then, and I would get very irritated.

I would ask him 'Yeh koi time hain aane ka? Aap yahan khana khane aata hai kya? Driver bhejdo, hum aapko dabba denge (Is this any time to come? Do you come here to eat food? Send your driver, I will send you tiffin).'

But Haribhai would tell him I'm like his mother.

'Chintu would come to my house and ask for prawns!' 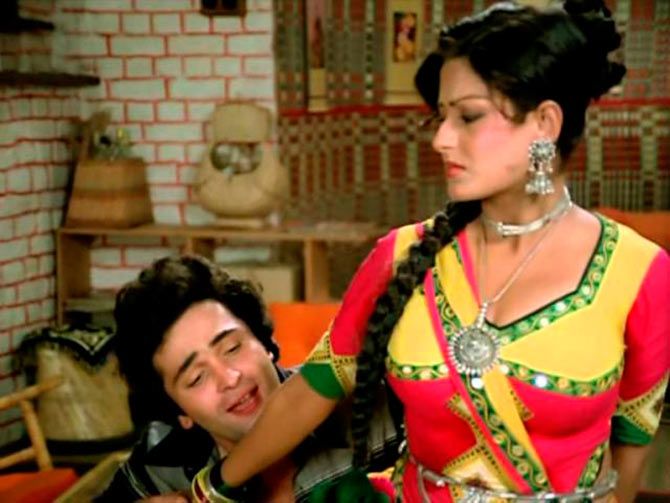 Image: Rishi Kapoor and Moushumi Chatterjee in Do Premee

I had a very close friendship with Rishi Kapoor, Neetu and Mithun Chakraborty.

Whenever Mithun came to Geetanjali (the bungalow and dubbing studio that Hemanta Kumar owned, and where Moushumi lived) for his dubbing, I would send him food. He would tell me to make typical Bengali food.

Chintu (Rishi Kapoor) was very fond of food too. When I was working on Aa Ab Laut Chalen, Chintu would come to my house in the evening and ask for prawns.

I would say, 'Prawns toh hain, par tu panch baje prawn khayega?' (there are prawns but will you eat them at 5pm?)

And he would say yes.

'If Dharmendra saw me standing alone at a party, he would say, 'Where is your husband? Go and stand with him'. I came to know Dharmendra later; he was my father-in-law's friend.

If he saw me standing alone at a party, he would say, 'Why are you standing here? Where is your husband? Go and stand with him'.

Once my husband was out of station, and my friend insisted we go for a film's mahurat. The mahurat was in a bar, and the place was not very good. I felt uneasy.

Then, Dharamji entered with his brother. As soon as he saw me, he walked up to me and asked me what I was doing there.

I pointed to my friend and said, 'I came with her.'

He stared at me and then told his brother to get his car and drop me home. 'Abhi jao yahan se, get out,' he said.

The film industry is a lovely industry. I can't think of anything so nice and sweet. It is full of artists, and artists are like flowers, very sensitive.

'Manoj Kumar helped me with my Hindi' I did not find Hindi difficult. People say I am always in a hurry to express my thoughts and that's why any language is difficult for me. But I don't agree.

I am not conscious of my pronunciation because this is not my language, and I am not in the profession of teaching. I have to convey my feelings through my scenes and if I can do that, it is enough.

In Roti Kapda Aur Makaan, I had to say three pages of dialogue in one single take. There was one word 'Rakshas' (demon), which I would pronounce as 'Rakhosh' (the Bengali way of saying the word).

I was very upset that I couldn't get it right. I was tired and told Chandra Barot, the assistant on the film (who went on to direct Amitabh Bachchan-starrer Don), that I will correct it in the dubbing.

Manoj Kumar overheard this and asked me to take a break, and correct my dialogue.

'I learnt so many things from Shashi Kapoor' 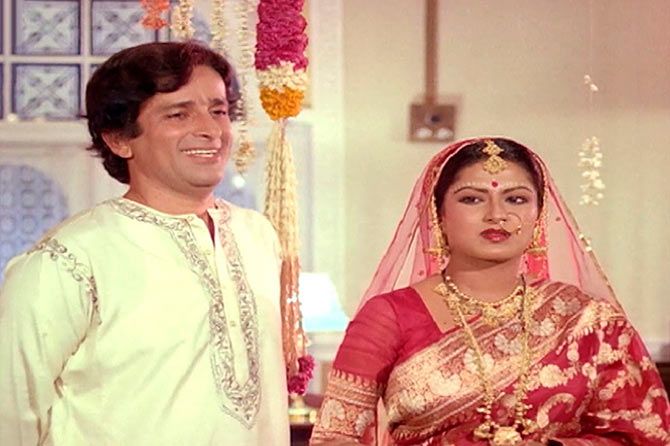 I learnt so many things from Shashi Kapoor. I used to call him Shashi uncle earlier. But when I was shooting for Anari in Mahableshwar, he told me not to call him 'uncle' -- we were shooting for a romantic song and some fans were standing there.

In Bengali, we address everyone as 'tum'. One day he told me, 'Don't say 'tum', say 'aap'. Respect and dignity you have to command and demand, you don't get it like that.'

Today, I understand why he scolded me.

'Vinod Mehra would tell me, 'Don't jump around so much'' I learnt many things from Vinod Mehra too. He would call me Indu, short for my original name Indira

He would tell me, 'Indu, when you are talking to someone in excitement, you start walking towards that person and get too close. Keep your distance, you are a heroine.'

He added, 'Itna uchal khud mat kiya karo, everybody is not your family member, don't jump around so much.' 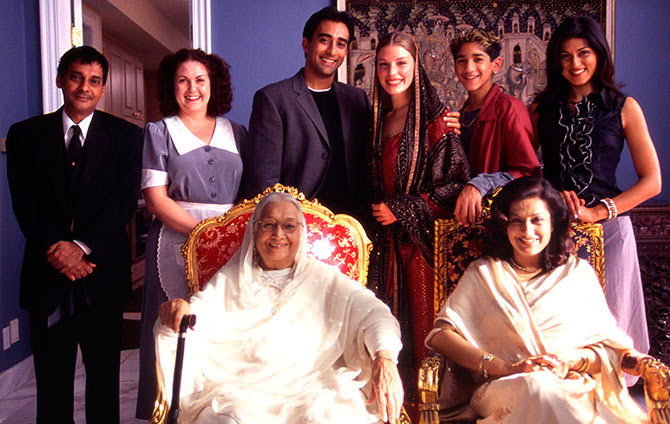 Working with Deepa Mehta in Bollywood Hollywood was a blast.

Deepa was so nice and understanding. There was a line in the film which I couldn't say properly, so I told her that I would fumble if I say this dialogue. She told me say anything but the meaning should be the same.

They took such good care of us. Rahul (Khanna), Dina Pathak and I, we lived like queens.

I called David (David Hamilton, Deepa Mehta's husband) Deboo. I am still in touch with them.

Deepa had offered me Water first but I refused because the character in the film does not wear a blouse. I thought with my figure, I won't be able to carry that off. 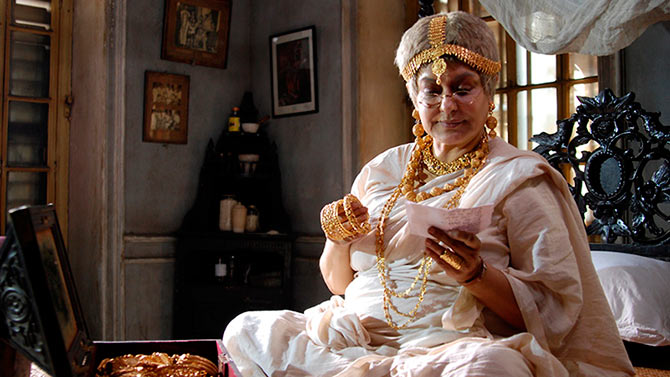 I worked with Aparna Sen in Tapan Sinha's Ekhani, and then in Brijesh Chatterjee's Kari Dine Kinlam.

She directed me in two films -- The Japanese Wife and Goynar Baksho.

There have been a series of incidences because of which I am upset.

People, who have power, will manipulate. There is nothing wrong in that. But when it happens again and again, then you can't take it.

Aparna Sen is a talented writer and a very good looking lady. I still respect her, but if she does something wrong, I will say that this is what she did and that is not right.

But I don't want to talk about it anymore.

'I have seen Amitabh Bachchan grow' 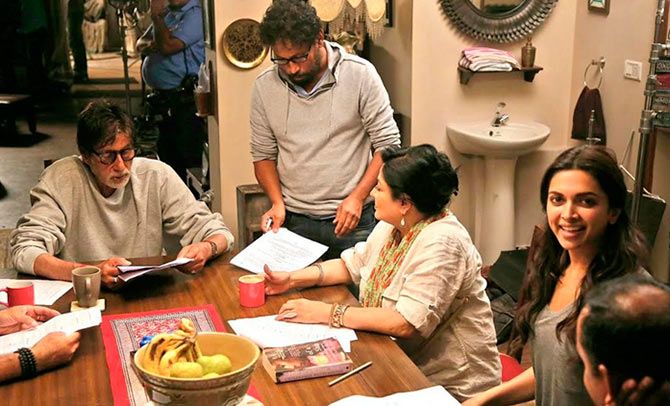 I have worked in many movies, but I have not got as much appreciation as I got in Piku before.

I get calls every day even from unknown people. I think it is because I am doing a Hindi film after a long time.

I did not have very big role, but I've got mind-blowing appreciation.

I've met Shoojit Sircar (the film's director) a couple of times before. I loved his movies Vicky Donor and Madras Café.

One day he told me he wanted to cast me and Amitabh Bachchan.

I am a lazy actress and have to be very motivated, so I gave him the names of actresses he could consider instead of me. But he wouldn't take no for an answer.

Everybody told me to do it, especially my elder daughter, so I ultimately did.

I have seen him grow. Today we are in different stages of life and therefore we are more relaxed in our ways. We understand so much as we have seen so much in life.

Part 1: I was always a superstar