'We are taking you into a world which does not exist and we want to you to experience it through us.' Aditya Seal is understandably psyched up about Student of the Year 2 wherein he shares screen space with Tiger Shroff, Ananya Panday and Tara Sutaria.

Aditya has done a handful of films over the years, but is still trying to slide out of the shadows of his breakout performance in the 2002 film Ek Chhotisi Love Story wherein he featured as a teenager alongside Manisha Koirala. The film was considered too bold for its time and hence drew a lot of attention.

"You will get one or two chances, but after that, why will a producer waste his money on you? Which is the case with anybody, be it an outsider or an insider," Aditya tells Rediff.com Contributor Mohnish Singh.

Brief us about your character in Student of the Year 2.

My character's name is Manav Singh. He is the blue-eyed boy of St Teresa's. Everybody loves him including his teachers.

Though he is extremely rich, he is not one of those typical rich spoilt brats. He is like a leader of the college in a way. He is a good guy.

But if there is somebody who is trying to threaten his position or trying to take his throne away, then he will do just what is needed to be done to not get dethroned.

He still sits on the iron throne. How did you bag the role?

It was a long process actually. Shanoo Sharma (casting director) played a very pivotal role. She suggested my name to Karan Johar who got the audition arranged.

The second round of auditions was with Puneet. As soon as I finished the audition, he was very happy and said, 'For me, you are final, but Karan has to like you too. So, whenever he sees your audition, I'll let you know'.

It took about 10, 12 days as Karan was out of town. As soon as he came back, I got a call from Puneet sir saying that Karan Johar wanted to meet me and why don't I come and meet him.

That was a surreal experience.

For me, to walk into Dharma Productions for the first time was a dream. So, I was walking into my dream, making it a reality.

I met Karan Johar for the first time. I was extremely nervous, but I was just trying to show that I was confident. I tried to put that facade out.

But within five minutes, I was so comfortable with him, because Karan Johar and I literally sat on a couch and started talking.

The meeting that was supposed to happen for 15 minutes ended up happening for at least an hour. And nothing much about work; we started talking about each other.

He asked me, 'Tell me something about yourself, your life and how has it been'. And I was asking him too. He was telling me incidents about his life.

So, we opened up and became friends at that time. And that is when he told me that I was finally onboard.

Had it not been a powerful character, would you have still done it because it was offered by Dharma Productions?

Everybody wants to work with Dharma Productions, but I am somebody who enjoys the character more than anything else.

If it's a good film, and you give me a good character which kind of challenges me, then I am up for it.

But let's not deny if it is for Dharma Productions, I would have done it. It's a fantastic world. IMAGE: Aditya Seal and Tiger Shroff in Student of the Year 2.

Were you signed before the lead cast was locked or after that?

I think I was the last one to be cast because they were looking for a boy for a very long time. They must have auditioned a few people. Maybe they were not happy.

I think my character was the last one to be cast. Tiger Shroff was signed first and then the girls and then I was cast.

What do you have to say about people who haven't liked the trailer?

It's just a film; we are not saying it's a true story.

You will never want to be a Black Panther and you will not want to be an Iron Man either. They don't exist in reality, but you still want to watch them.

We are taking you into a world which does not exist and we want to you to experience it through us.

Who did you shoot first with from the lead cast?

Tiger Shroff as a lot of my scenes are with him.

We used to have a great rapport. While working with him you will never feel that he is Tiger Shroff. There is nothing like that.

We talk a lot of crap together. So, for me, I never felt I am with him and have to behave a certain way. 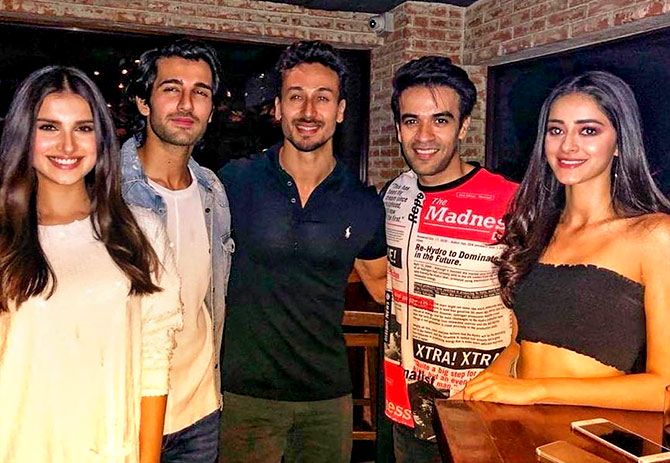 How was your experience working with Ananya Pandey and Tara Sutaria?

They didn't feel like newcomers. They were already into workshops and shooting for different things. So my time to rag them was over.

They are very easy and fantastic to work with. They were very comfortable with everybody around. They look fantastic, very beautiful. Their dance is amazing. It's surprising that for their first film these girls are so prepared.

The first instalment of the film had done very well and there are a lot of expectations from the second part. How do you guys take it?

I am taking it in a very positive way, because they have liked the first one, they will come and watch the second one as well.

I believe they liked the trailer, the songs are doing well and I am being very positive about it. Besides all of that, the ex-students (Alia Bhatt, Varun Dhawan and Sidharth Malhotra) have promoted it in their own way.

So, I am taking it all in a positive way. Whatever film we make, if it's a franchise, there will be comparisons with the franchise. Those things happen and you got it take it in your stride.

Do you relate to the character that you are playing?

In a way, I do because college life is pretty exciting. I have been a brat in college. It was the first time ever that the police had come to my premises because of me and my friends.

I have been a brat, bunked a lot, my attendance was 30%. We had a big band of boys. We were the leaders of our college. Your much-publicised film Tum Bin 2 did not do well at the box office. How did you deal with its failure?

As an actor, it did not affect me at all. It was something I put a lot of effort into. My director was very happy with my performance. The media had written fantastically about me at that time.

It affected me as a person a lot as I had lots of hopes from the film. I had to struggle to bag a next film.

When you believe in something and it doesn't happen, your hopes just crash.

Then there are people around you, your family. Because I come from an absolutely non-filmy background, to bag a film is not easy.

Aashim Gulati, your co-star from Tum Bin 2, moved to television after the failure of that film. But you chose to stick to movies only. Does TV not attract you?

It's not that it doesn't attract me. From what I have heard from people, it becomes a bit monotonous after a while.

I really want to do something where I have read the script two or three times before going to shoot and if I have to question my director, I can. That happens in films only. So, that is what attracts me about films.

You have been in the industry for so many years now. Do you think it's difficult for outsiders to get right opportunities?

For outsiders to get a chance is difficult. I agree with that because if you have a background, it is easier to put money on you, easier for them to promote you.

For somebody who has nothing, what do you promote that person on?

Then it's you who have to show something extraordinary. So, if you have that thing, you will crack it, you will make your way into it and eventually when you are in it, then it's all you.

No matter whose son or daughter you are, if you do not have in it, if you haven't worked on yourself, you will not sustain.

You will get one or two chances, but after that, why will a producer waste his money on you? Which is the case with anybody, be it an outsider or an insider. 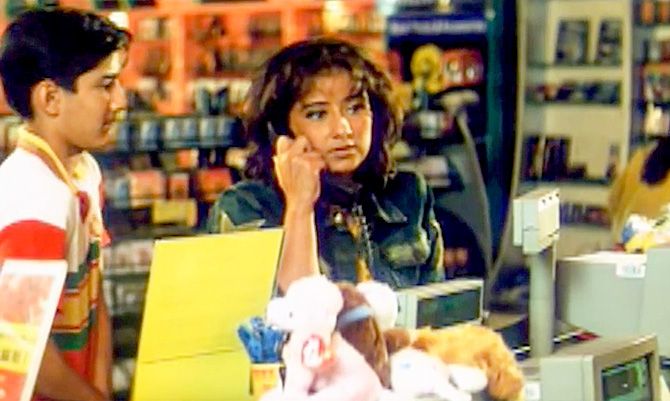 How was your experience working with Manisha Koirala?

We had very few scenes where we were actually face to face. I did not have a lot of interaction with her, but I remember this one particular scene where I apparently cut my veins.

The shot was such where my hand was bandaged and Manishaji was about to reach out to me, but my grandmother stops her from touching me.

When Manishaji realised that it was just a hand shot, she said, 'Wait, let me do my nails and come back'.

She took around 15, 20 minutes while I was still lying on bed. Meanwhile, they switched off all the lights and I slept off.

After 15, 20 minutes when Manishaji came back, they turned on the lights. And when I opened my eyes, the first person I saw was Manishaji. She was without her makeup. I swear to God I had never seen a prettier sight till now in my life. 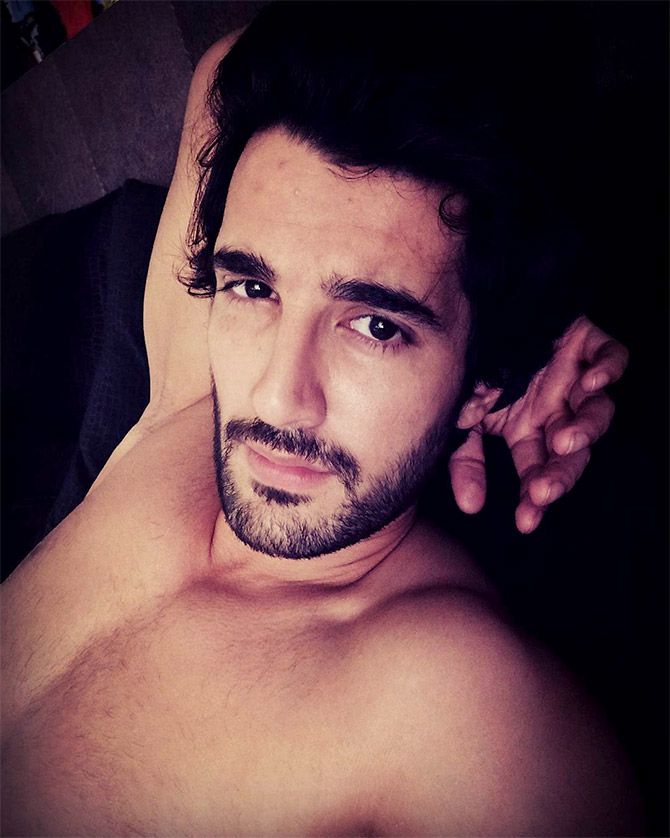 What kind of roles do you want to do now?

I first want to establish myself commercially. What I am really looking forward to doing is suspense thriller films. 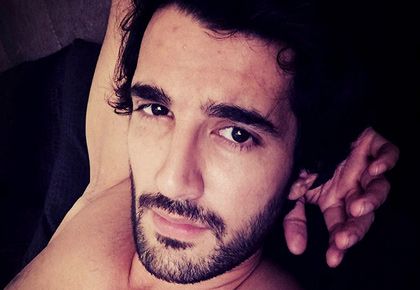