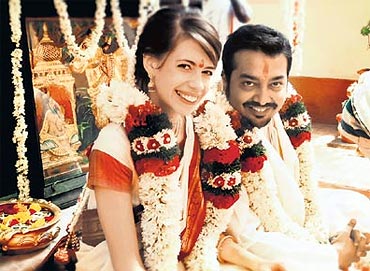 Anurag Kashyap and Kalki Koechlin got married on Saturday, April 30, in a village called Kalhatty, in Ooty, at 10:30 am under a 100-year old mango tree.

Though Kalki was born in Pondicherry, she did her schooling in Ooty, and lived there till she was 18 years old.

Kalki's parents are French but the bridal couple got married in traditional South Indian style.

The wedding was attended by close friends and family. Kashyap's family including brother Abhinav (who directed Dabangg), and 10-year-old daughter Aaliya (from his previous marriage to Aarti Bajaj), were present.

There will reportedly be a reception in Mumbai for the Bollywood fraternity.

Join us in congratulating the couple!