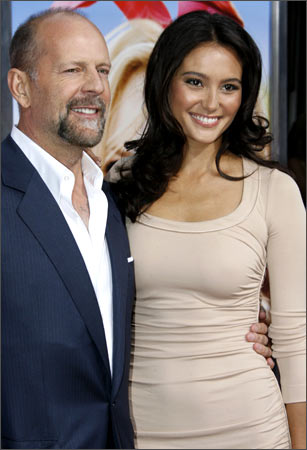 Emma Heming, who tied the knot with Hollywood actor Bruce Willis at the weekend, has been a model for sexy lingerie chain Victoria's Secret for several years.

She currently features in a Top 100 list of the world's hottest women, reports the Sun.

The Die Hard hero met Heming through mutual friends at the start of January 2008 and the pair began dating.

Heming -- born in Malta but brought up in London -- was first spotted in the actor's arm going to dinner with fellow A-lister Robert De Niro.

She previously experienced fame dating billionaire F1 racing boss Flavio Briatore in 2000, who was 50 at the time -- 29 years her senior.

The babe was also said to have been out with ER hunk John Stamos, best-known to fans as Dr Tony Gates.

A big money modelling deal with La Senza followed, but it came after years of work on the catwalk.

Heming began life as a pin-up in her twenties and soon landed a string of jobs with undie chain Victoria's Secret.

She was a popular girl and appeared in many of the chain's saucy catalogues showing off revealing outfits.

Next she tried her hand at acting with a number of small movie roles and minor TV parts.

The high point came when she landed a part in HBO's TV series Entourage but it was limited to a one-episode stint as a girl in the background.

In the picture: Bruce Willis and Emma Heming