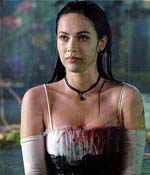 A well-reviewed and thoroughly engaging 3-D animated film for the family Cloudy with a Chance of Meatballs triumphed over several other newcomers in North America over the weekend.  The movie is expected to be a big hit abroad, as many animated films in recent years have done exceedingly well in Europe, South America and Asia.

Adapted from a 1978 best-selling children's book by Judi and Ron Barrett, the film handily trounced Steven Soderbergh's The Informant!, an intriguing story of a complex corporate whistle-blower (Matt Damon) and the much publicized Megan Fox-starrer Jennifer's Body which received mixed to tame reviews at the Toronto International Film Festival last week. Jennifer's Body is Shapeless, ran a headline in an American newspaper. Though some critics such as Roger Ebert liked  the third feature by Karyn Kusama, many did not.

While Cloudy grabbed an estimated $31 million in three days, The Informant! took a disappointing $10 million, and Jennifer's Body just about $6.8 million. But then the former cost about $22 million and the latter, $16 million, and their distributors Warner and Fox respectively declared Sunday evening that eventually the films would be profitable.

Cloudy, which tells the story of an eccentric  inventor  who creates a machine capable of turning water into food, is fast-faced and full of delightful happenings. But it also offers a few lessons to the young and old, about gluttony and ambitions that make no room for the well-being of others.

Soon after the movie opens, we are ushered into a world where giant pancakes and pasta fall from the sky jolting the  scientist who thought he can solve world hunger. But he has not foreseen people using his invention to further their own ambition And surely, he never imagined that things can go  wrong to the extent excess amount of food creates chaos in cities and towns.

The best way to enjoy Cloudy is to see it on IMAX. 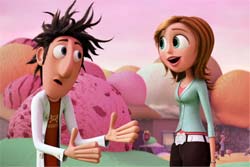 'A word to the wise: Do not, under any circumstances, see Cloudy with a Chance of Meatballs without eating first,' wrote Miami Herald. 'The gigantic pancakes, cheeseburgers, hot dogs and ears of corn that rain from the sky may wreak cataclysm on the poor citizens of a small island in the Atlantic Ocean, but the food is rendered in such beautiful, photorealistic detail -- and in jaw-dropping 3D -- that your stomach will be growling long before the end credits roll.'

The movie cost about $90 million, about half the budget of such family friendly movies as the hit Up. It is yet another example of a comparatively small budget film doing very good business. The leader of such movies is Ice Age 3 which is heading for an awesome $880 million worldwide, making it among the top five worldwide hits.in the last two decades

While The Informant! received many good reviews, Jennifer's Body wasn't as lucky. Though it featured Megan Fox (Transformers which has grossed over $800 million worldwide), whose sexy images from the film have been everywhere, the film had little bite in it. It was scripted by Diablo Cody whose work in the hit independent film Juno had fetched her an Oscar.

Some reviewers thought it was trying to be too clever.

'But in the process of crafting a lot of really clever scenes, screenwriter Diablo Cody seems to have forgotten that she was making a horror movie,' wrote San Francisco Chronicle. 'Enjoy the film for its witty dialogue and fun performances, but know that there isn't a single good scare. An episode of Murder, She Wrote has more thrills.' 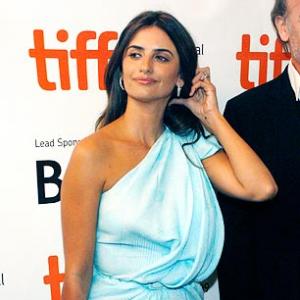