All its many characters, though portrayed by an able cast, are, ultimately, mere outlines devoid of nuance or depth, points out Sukanya Verma. 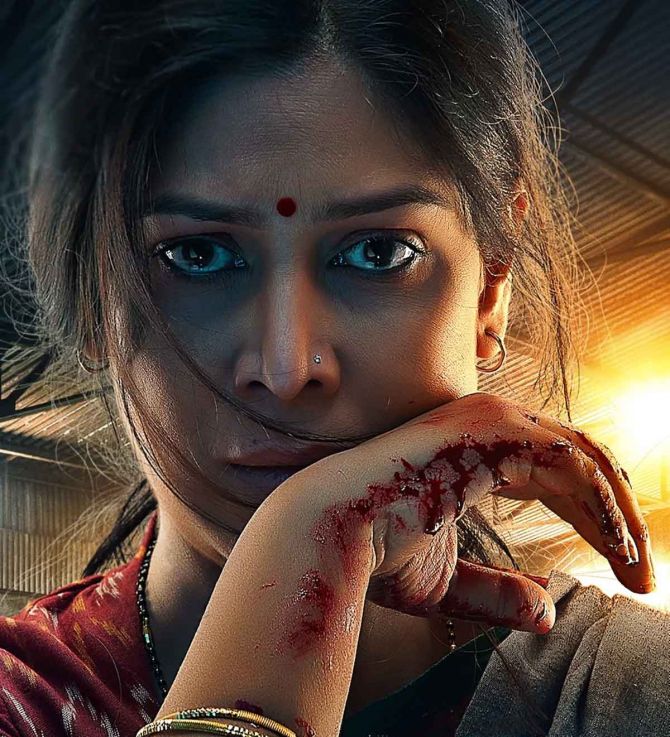 A mother's protective instincts and intense reaction on seeing her child in harm's way has spurred different degrees of drama and retribution. What Mai brings to the table is her capacity to stay maternal even under the most trying of circumstances.

Set in Lucknow, this six-part Web series written by Atul Mongia, Amita Vyas and Tamal Sen and co-directed by Mongia and Anshai Lal centres on an aggrieved mother deep diving into a dark world of deceit and crime in an attempt to seek closure.

Sheel Chaudhry (Sakshi Tanwar) has a good head on her shoulders. She's composed to a fault. The middle-aged woman looks after her home and pharmacy shop and is as mindful of her husband's (Vivek Mushran) frail health as the elderly she looks after in a nearby geriatric home.

Taking care of things comes naturally to her, be it her own household or her brother-in-law's (Ikhlaque Khan) whose teenage son's (Mikhail Gandhi) interests she's keenly safeguarding.

But when her mute daughter Supriya (Wamiqa Gabbi), a pathology technician by profession and stand-up comic by hobby, meets with an accident, Sheel is thrown off balance. Her head is filled with questions whose answers she must seek come hell or high water.

Sheel smells something rotten in the air early on and her curious trail leads her to unsettling information and unplanned offences.

Not all of it rings true though, especially the abrupt shift in Sheel's purpose as she learns of a larger fraud at play amidst lost crypto keys and incriminating Mozambique drills. What's incredulous is her extraordinary comfort in turning overnight sleuth/mastermind/ and expert at all things criminal.

Whether the influential patron (Prashant Narayanan) of the elderly home she works for, his cigarette-puffing girl Friday (Raima Dev Varma), his minions (Anant Vidhaat, Vaibhav Raj Gupta, Omkar Jaiprakash), the Special Forces Officer (Ankur Ratan) at the helm of investigation or a mysterious spectator and former convict (Seema Pahwa) are allies or accountable, we are left to wonder over the course of half-a-dozen slow burn episodes.

But it's the underlying stories of the minor characters and Sheel's misplaced mommy-like impulses around them while confronting the strains and secrets about her own family that Mai is more invested in.

Unfortunately, its rather loosely written tease of a script tests your patience for something of consequence to happen. Whatever mild intrigue it builds crumbles against a dull pace. All its many characters, though portrayed by an able cast, are, ultimately, mere outlines devoid of nuance or depth.

Despite a premise of grief and shady business, Mai is terribly inert. Although there are enough instances of verbal violence and visual -- what with its many, many scenes of spine-tingling torture, there's a strange randomness to the all-important reveals involving blood relations, extra-marital affairs and sexuality.

Mai maintains a consciously muted ambiance. Lucknow's stately charm and old-world appeal is washed away in yellowish sepia frames that reflects the bleak, lifeless mood of its characters. The same emotional restraint is exercised by its storytelling too but with such added emphasis it's almost unnatural.

The process of grief is unique for everyone and in Sheel's case -- highly internalised. Unlike Maatr or Mom's vendetta journeys, Sakshi Tanwar's uniformly understated approach resists hysterics at every juncture. But she dials herself down so much, what's left is more angel than avenging. 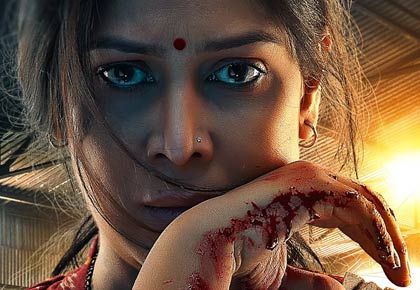