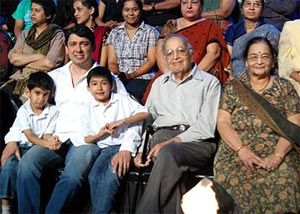 His entire family was by his side when he breathed his last.

Madhuri issued a statement, "We'll miss him but we know he lived a full life. We thank all those who have offered their condolences and prayers."

Doctors had reported alerted the Dixit family about the nonagenarian's failing health following which arrangements were made for a temporary replacement for Madhuri on Jhalak Dikhhla Jaa, the popular dance show she co-judges, on Thursday.

But the actress shot the grand finale weekend episode, as everything seemed fine until this morning.

In the picture: Madhuri's husband Sriram Nene, with their sons, and Madhuri's parents Shankar and Snehlata. Photograph: Pradeep Bandekar. 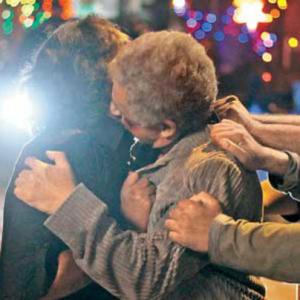