'Each leg of my career has brought new experiences, new joys'

'My kids think it's very cool they will see me on Netflix.' 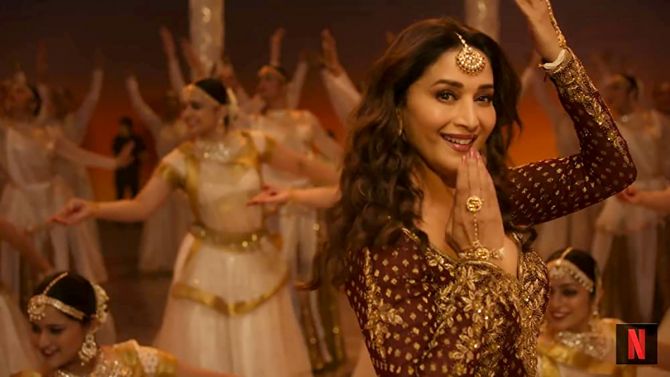 Madhuri Dixit returns to acting with the Netflix series The Fame Game.

"I think showbiz, just like any other business in the world, has its perils and pitfalls, and I think it's universal. While I have seen hardships in the industry, I think it's important to recognise the luck I have had, the luck that has let me live in the moment, spend time with my family, steer away from the pressures, and focus on my craft," she tells Subhash K Jha.

What prompted you to take up The Fame Game?

You know, when Sri (Rao) approached me with this script, I couldn't say no.

The story of Anamika Anand was so endearing.

Right off the bat, I knew I wanted to work on this project.

How different was it shooting for a Web series as compared to a feature film?

I don't think it was too different.

I think of a project as a project, regardless of its format.

For me, work is work.

I get up and do my job. I don't see much of a difference. 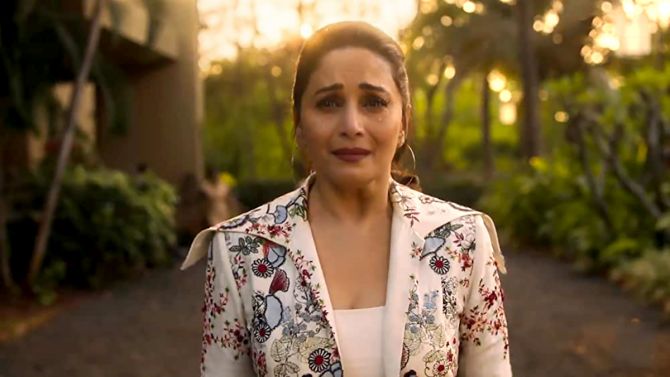 The Fame Game is about the perils, pitfalls and pleasures of show business. How closely did you identify with your character Anamika Anand?

You know, the only similarity between my character Anamika and me are that we are stars, well known names in the industry. It ends there.

I have been blessed to have the support of my family and peers throughout my career.

I think showbiz, just like any other business in the world, has its perils and pitfalls, and I think it's universal.

While I have seen hardships in the industry, I think it's important to recognise the luck I have had, the luck that has let me live in the moment, spend time with my family, steer away from the pressures, and focus on my craft.

You have had a spectacular innings as an actress from Abodh to Kalank, and beyond. Which, according to you, are the landmarks of your career?

That's very kind of you. This is a tough one because how do you choose?

Each leg of my career has brought new experiences and joys.

I learn so much with each character that I play.

I think stepping into the OTT platform with The Fame Game on Netflix is definitely a landmark.

I get to reach a global audience in multiple languages and my kids think it's very cool that they will see me on Netflix.

I do also genuinely think every role I've played from Gauri in Abodh to Nisha in Hum... Aapke Hain Koun to Bahaar Begum in Kalank are all career-defining moments. 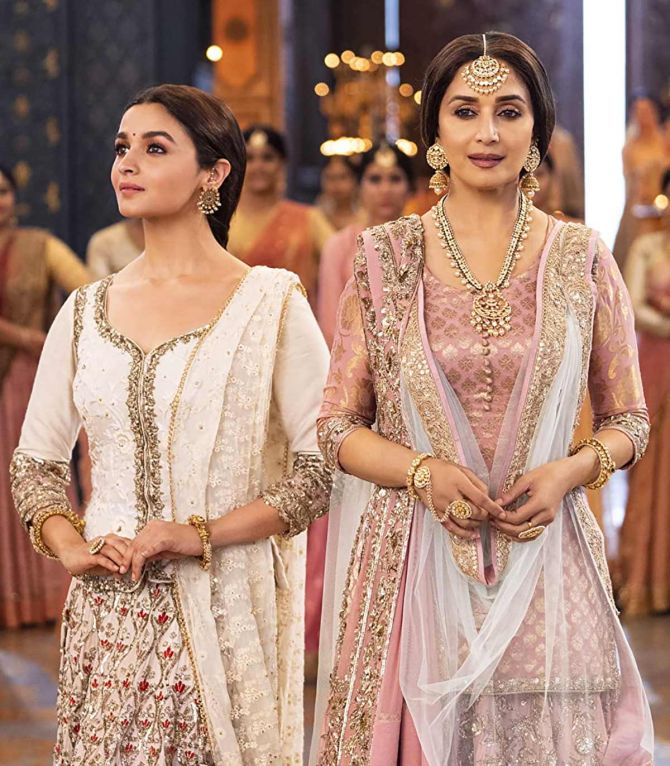 You know like I said, I think I've been incredibly lucky that my career, my fans and my co-workers have been so gracious.

I never looked at it as staying away from acting.

I met my husband Ram. I knew this was the man I wanted to marry and that's what I did.

I had kids and I just lived in the moment with them.

How involved are you with your dancing pursuit? At this stage of your life, which is more interesting to you: Dancing or acting?

Learning to dance is like riding a bicycle, it's something you'll never forget.

It's always going to be a part of me, just like acting is.

I think being a dancer helps me be a better actor and vice versa.

I have been blessed in life to work with legends like Sarojji (Saroj Khan) and Pandit Birju Maharajji to perfect my craft, and it will always be an integral part of me that goes hand-in-hand with my acting. 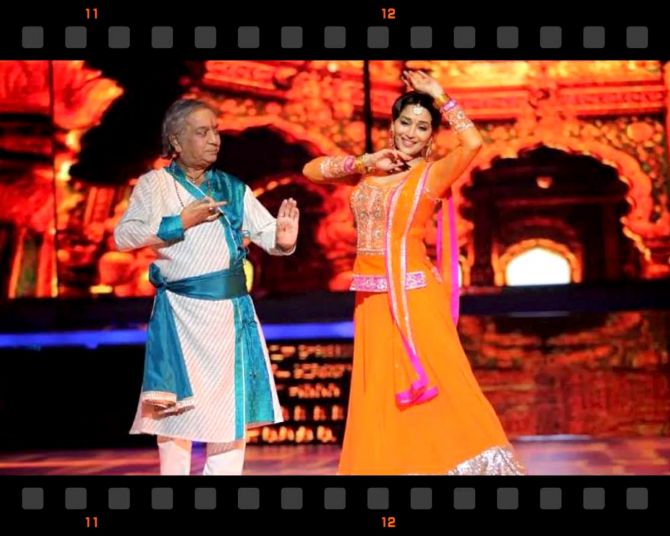 Pandit Birju Maharaj named you as the right artiste to carry his legacy forward.

Wow, that is immensely humbling. I'm grateful that someone of his stature thought of me in such high regard.

His legacy is one for the books, one that should be remembered and worshiped. But I doubt anyone can take his place and carry it on.

He was a beautiful teacher and his legacy carries on in all the lives he's touched and all the students he's lent his expertise to.

I hope to make him proud and carry on his legacy where I can.

A lot has changed over the years in the entertainment industry. The last two years have been especially tough on everyone. How have you coped with the COVI-19 crisis? How much has it affected your life and work?

Needless to say, the pandemic has been hard on everyone.

I really hope and pray everyone recovers and emerges from this stronger.

For me, it was difficult, of course, but I am grateful to have a supportive family.

Professionally speaking, I have received my fair share of work and feel blessed to be where I am.

We shot The Fame Game during the pandemic with all the necessary precautions and kudos to Netflix and Dharmatic Entertainment for handling it so carefully. 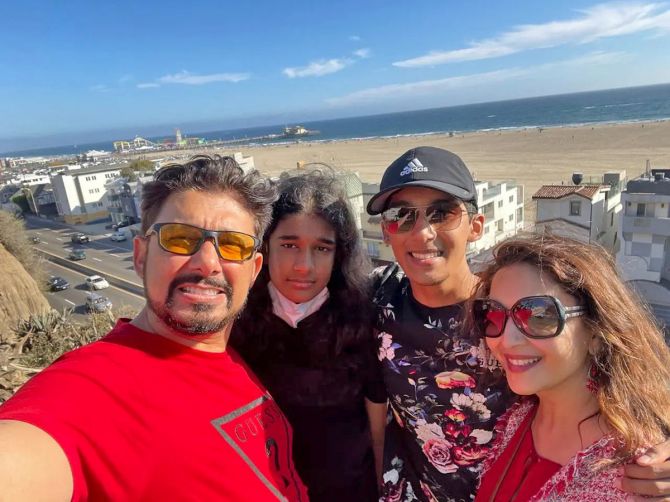 The industry and civilisation lost its voice recently. Lata Mangeshkar was your voice in many songs. Your thoughts on her?

She was a visionary.

She had the voice of an angel and her demise is a loss to the world but also very personal to me.

Lataji was a beautiful soul.

I have been immensely lucky to have worked with her, danced to her melodious music and have called her a dear friend.

She was someone I looked up to, like the rest of the world.

Her music lives on.

Every time I hear one of her songs, I feel her presence and I find myself smiling, reminiscing.

The world lost a legend, but she will continue to live on through her fans and her music.

Coming back to The Fame Game, how difficult was it balancing those hours of shooting with your home life? Now that your sons are grown up, do they demand less of your time? Does that mean we will see more of you on screen?

I have two full-time jobs. I am a mother first and then an actor.

My children are my world, but they are all grown up now, so hey do require less attention as opposed to earlier.

My older one is off to college and my younger one is now taking that step. So in between work, we're working on college applications, exam preparations, and their next steps.

Family time is very important to both Ram and me. 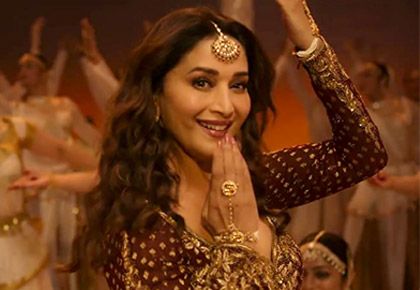 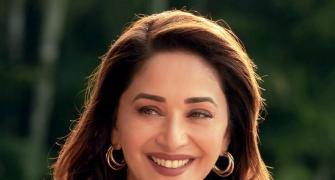 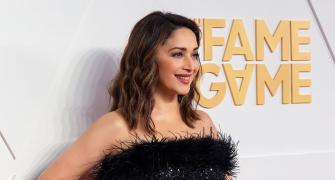 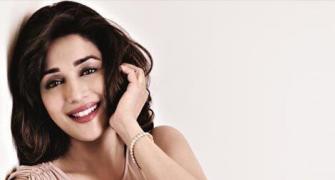 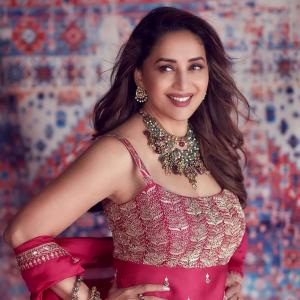