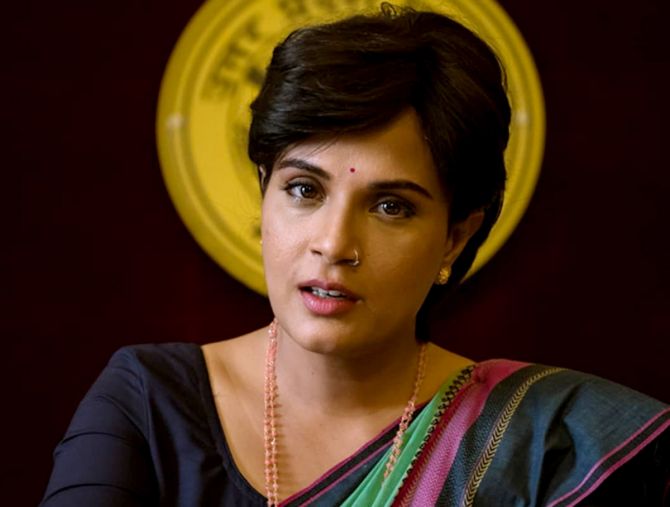 Though a disclaimer says that Madam Chief Minister is a fictional story, it bears striking resemblance to how a former chief minister of Uttar Pradesh made her mark in politics.

It has many key social-economic touchpoints that more or less defines the environment of the state.

But despite all the pain the protagonist goes through, rooting for her is tough.

It may have never been the agenda behind the film anyway.

The movie makes an immediate connection with the rampant casteism in 1982 Uttar Pradesh when a wedding procession is rudely halted, leading to the death of a poor Dalit man Roop Ram.

Minutes later, yet another girl child is born to his wife and him after three previous girls were killed because of their gender.

In 2005, this girl child Tara (Richa Chadda) is feisty, fiery, loud-mouthed, arrogant, and confident, someone who doesn't hesitate to call out people.

When her romance with an upper caste student leader Indramani Tripathi (Akshay Oberoi) goes south, she is attacked for not staying silent about it.

That's when she meets Parivartan Party leader Masterji (Saurabh Shukla) who guides her into becoming a politician and winning power.

The rest of the film is about the plots to dethrone her.

Madam Chief Minister deserves applause for highlighting some of India's biggest flaws -- from casteism to female infanticide -- in the first 20 minutes.

The political drama has been handled well with enough twists and turns to keep the audience interested.

A political drama is basically a game of chess where people think of gaining absolute power by hook or by crook.

Though some of the twists are predictable and conveniently deduced, it maintains the intrigue factor in most parts.

The motive here is to show how Tara, a woman from a backward caste background, claims the top position in a state. But in a bid to show the many struggles in her political journey, not much attention is paid to the person who becomes a politician.

Especially when she never had any political ambition to begin with.

A few hastily done scenes of Tara breaking a few social barriers and doing community upliftment are jammed in.

Manav Kaul's character could have been the best kept secret here, but the plain writing robs him of the chance.

Manav is a fine actor and does his job well despite being one of the weakest characters in the film.

Political thrillers are usually packed with idealistic one liners, but Madam Chief Minister stays away from such thumping scenes.

It's simple and a little too long.

Given the fact that the screenplay is devoted entirely to Tara's journey, Richa Chadha's laidback performance enhances the character.

She starts to grow on you after a while and stays with you.

Saurabh Shukla as her mentor is, as always, fantastic as is Akshay Oberoi in his small but crucial role.

But the characters don't have an arc and are for the most part one note.

All in all, Madam Chief Minister is a sincere attempt to show a woman's rise to ultimate power, but falls short of being a rousing political drama.