Love Hostel stays focused on the murky present and revelling in its increasingly dark outcome.
Despite the reach of social media and technology, this isn't the cushy, liberal India of mainstream culture.
It's a lawless, ruthless, endless minefield where uncertainty and bigotry go hand in hand and patriarchy is a foregone conclusion, observes Sukanya Verma. The world is hard on lovers.

In India, marrying a person of your choice can be a daunting task for an inter-faith, inter-caste or inter-gotra couple where families and communities will readily draw blood of their own as well as another for bringing 'disgrace' to their clan.

To protect young men and women from such rampant cases of honour killing, the court mandated a 'safe house' provision where they could take refuge under police supervision until further notice.

It's an indefinite process with an illusion of security that prevents couples, running scared in North Indian states of Haryana, Punjab, Uttar Pradesh and Rajasthan, from leading a relaxed, normal life.

Amidst a state of relentless Islamophobia and an ongoing hostile climate for Hindu-Muslim marital alliances branded Love Jihad, respite is a long shot.

Raman's No Country for Lovers stars Bobby Deol as Dagar, a hitman in Haryana, channelling Anton Chigur's menace by gunning down anyone and everyone crossing his path as a self-appointed 'samaj sevak' on a quest to 'clean' society of runaway couples.

When he is hurt, the deadpan gunslinger visits a veterinarian, an allusion to the animal he has become over the course of his gruesome pursuits.

Back in 1995, Bobby started out his career as a pahadi lad eloping off with his millionaire city girlfriend while her step dad and his goons hunt them down all the way to Himachal. Things have grown far more complicated since the poor boy-rich girl conflict of Barsaat.

In Love Hostel, Bobby slips into the role of an antagonist tracking down a pair of small-town Haryana newly-weds Jyoti Dilawar (Sanya Malhotra) and Ashu Shokeen (Vikrant Massey), who are assigned a rundown safe house, watched over by a pair of seedy cops even as a mysterious driver (Akshay Oberoi) keeps tabs on their whereabouts.

It's a match disapproved of by Jyoti's MLA grandmother (Swaroop Ghosh), which leaves Ashu's minority identity with no say.

A friend of the couple's (a plucky Aditi Vasudev) voluntarily helps while a cop (a solid Raj Arjun in a half-baked role), haunted by ghosts of the past, pleads his superior to let him stay on the case a little longer.

But Dagar's fast approaching footsteps promise a deadly fate for everyone involved.

There are collateral damages galore, but Love Hostel keeps its focus on the events as they unfold in a nastily urgent tone.

And so Ashu must finish that one last job before he can settle in marital bliss. Except is there any prospect for people who have to change their name and conceal their religion? There's so much harshness in the atmosphere, which casually wears itself on both -- the anger as well affection of its protagonists.

'I should have killed her in my womb,' groans Jyoti's mother.

Jyoti, too, is quick to joke about Ashu's community's lack of population control.

They may be in love, but the evils of conditioning -- Chhori ne Diwali ki jagah Eid chun li -- haven't entirely been cast off.

Keeping with the Coen Brothers's film belief in things will go wrong and refusal to dwell beyond necessary, Love Hostel stays focused on the murky present and revelling in its increasingly dark outcome.

Despite the reach of social media and technology, this isn't the cushy, liberal India of mainstream culture.

It's a lawless, ruthless, endless minefield where uncertainty and bigotry go hand in hand and patriarchy is a foregone conclusion.

It's rather amazing that Shah Rukh Khan chooses to back a project (co-produced by Gauri Khan, Manish Mundra, Gaurav Verma) baring this discrimination of which he is a target too.

At little less than two hours, Love Hostel is a tense, taut watch made all the more sinister by its taciturn villains.

A single glare from Swaroopa Ghosh is enough to send shivers down the spine.

A calculated aggression shoots out from his dishevelled appearance and weary eyes rendering him far more foreboding than his legendary memes would like us to believe.

Two of the most heartfelt actors in the current crop, Vikrant Massey and Sanya Malhotra, effortlessly convey the flavour of the world they inhabit, warts and all, and why the bonds that tie them are no match for the differences that wish to break them apart.

Love is love. And it is strong.

But hate is hate too. And lately, it's stronger than ever. 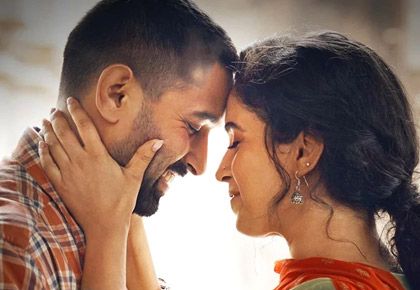