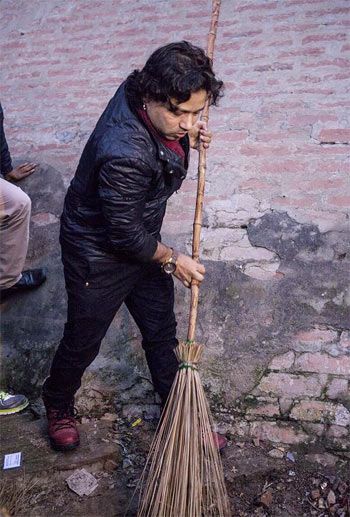 He wielded the broom at the Bhadaini ghat on the banks of river Ganga in Varanasi today.

The campaign aims at making India clean by 2019, the 150th birth anniversary of Mahatma Gandhi.

Actress Anushka Sharma, who is riding high on the success of her latest film PK, took to Twitter to thank her fans.

'I am literally in tears reading the overwhelming love & response you guys have shown for PK & us .Thank you from the bottom of my heart,' she wrote.

Sharma is currently busy with the post-production of her home-production NH10.

It is slated to release on March 6.

It's a wrap for Shaandaar!

The shooting for Vikas Bahl's upcoming film Shaandaar is over.

Alia Bhatt, who plays the female lead in the film, tweeted: 'And one more journey comes to an end.. Last night of shoot for #shaandaar ... Will be hoping this night never ends.. too much pain.' While Aditya Narayan will host the show, Shaan and Monali Thakur will be the new judges.

Shaan shared a picture from the sets and wrote: 'Zee Saregamapa L'il Champs !! First Day First Shoot... About to begin..Need your love and blessings!!'

Sa Re Ga Ma Pa Li'l Champs 5, which will also feature singer Alka Yagnik as mahaguru, will air from December 27.

Nargis posted the video on Twitter and wrote: 'Christmas is Coming, Christmas is coming! Check us out @sidmallya & Myself, For sum XXX-mas Cheer! lol'

Buzz is that Sidharth will make his acting debut with Kolkata-based director Q, who is known for his films like Tasher Desh and Gandu.

Singer Joe Cocker, who has died of lung cancer aged 70, loved Indian cuisines. Celebrity photographer Atul Kasbekar, who met him at an Indian restaurant in Us, recalled his experience and wrote: 'RIP Joe Cocker Met him a few times when I waited on tables at 'Paul Bhalla's Cuisine of India' in Santa Barbara. He was a regular. Nice man.'

Monica Dogra also paid tribute to him and tweeted: 'RIP #JoeCocker - you beautiful soul. Thank you for the music.'

Producer Shobu Yarlagadda tweeted: 'Heading back to India after nearly 3 week shoot in Bulgaria. Lovely country and we did some good work here! Thanks to Ramji & Saran of Travel Masters for introducing us to Bulgaria & handling the entire travel logistics! Thanks to Iliya Sotirov, Mitko & team of BullMasters for efficient local line production and production logistics in Bulgaria!'

Baahubali, which is simultaneously being shot in Telugu and Tamil, will also be dubbed in Malayalam and Hindi. It will star Prabhas, Rana Daggubati, Anushka Shetty, Tamannah Bhatia, Ramya Krishnan and Sathyaraj. 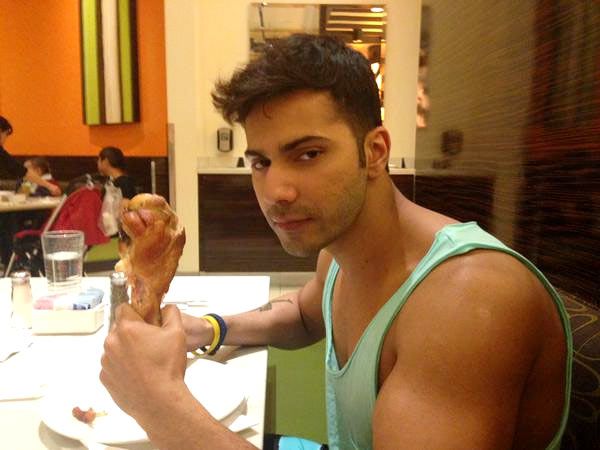 Actor Varun Dhawan, who will be next seen in Sriram Raghavan's Badlapur, is currently shooting for Remo D'Souza's ABDC 2 in Las Vegas.

His co-star Lauren Gottlieb shared a picture of him from the sets and wrote: 'Look at this guy!!!!! Itna khana!?!? Hahaha @Varun_dvn #ABCD2 #VegasShoot #LunchBreak'

The film, which is a sequel to ABCD: Any Body Can Dance, will also feature Shraddha Kapoor, Prabhu Deva, Punit Pathak, and Dharmesh Yelande.