Lata Mangeshkar: How could fate be so cruel?

'I will always remember her as a very beautiful human being.'
'God seems to summon such people a little quickly.'
Subhash K Jha listens in. 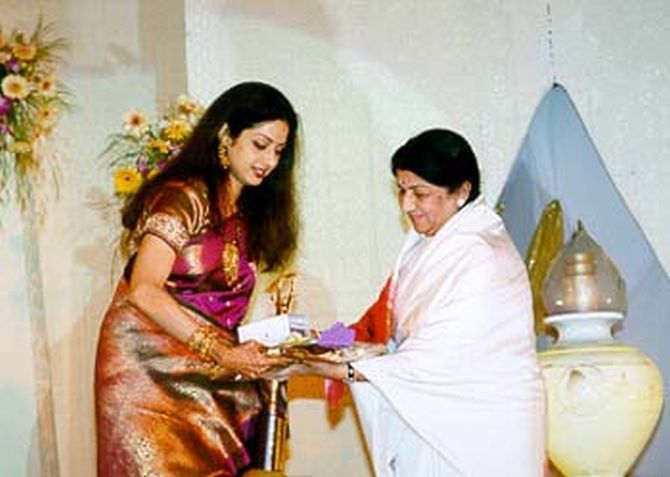 "Whenever there is a family function, Sridevi would come with her husband. She was always warm and affectionate."

When she first heard that Sridevi was no more, Lataji thought it was a cruel prank. "I've been a victim of hoax deaths often enough. But then someone told me it is true, Sridevi is no more.

"How could fate be so cruel? So young, so beautiful and such a long way to go!"

"Sridevi has lip-synced some of my best songs in recent years, including the iconic Mere haathon mein nau nau churiya hain in Chandni and Morni baghan ma in Lamhe."

"Her expressions in these two dance numbers matched my voice. I felt happy watching her dance to my songs," Lataji says.

"Maze ki baat yeh hai, Sridevi told me she never learnt dancing. Not formally. When she was a child, she just followed the dance steps that were given to her. She learnt to dance on camera. And to be so good at it!" Lataji recalls.

"Her combination with Yashji (Yash Chopra) was extra special. I love her expressions in my song Tere mere hothon pe in Chandni. She understood music and the emotions underlining the lyrics," she adds.

"I remember I had not only sung a devotional song Ek tu hi bharosa hai in Pukar , but also appeared in the film to sing it. Sridevi was there during the shooting. She suggested I wear a more colourful sari, but I told her I'd like to be seen on screen wearing the white sari with a coloured border that I wear at my stage concerts."

"I will always remember her as a very beautiful human being. God seems to summon such people a little quickly." 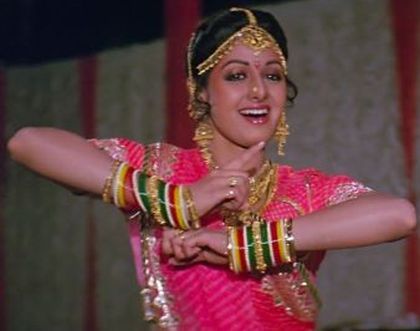