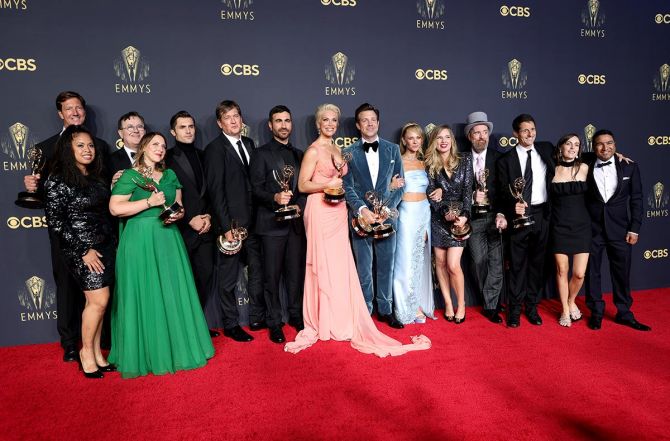 The Crown reigned supreme at the Emmies as the Netflix series won seven awards, including Drama Series and Outstanding Actress in a Drama Series for Olivia Colman's ongoing stint as Queen Elizabeth II.

While the Emmy Awards were held virtually last year, this year's ceremony was held in Los Angeles and was broadcast live.

Cedric the Entertainer hosted the show that ran for over three hours. 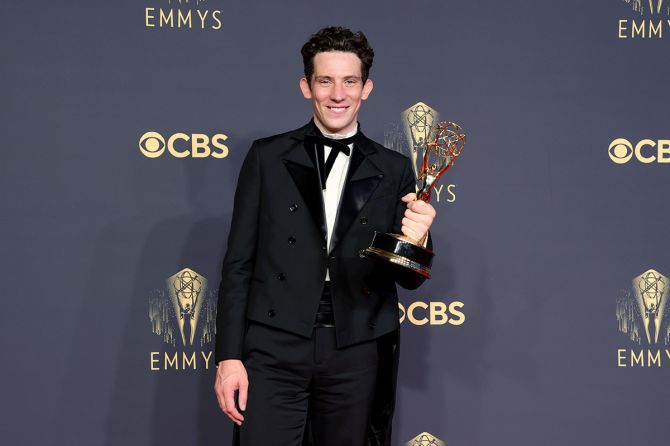 The Crown also claimed the writing and directing honours for a drama series for Peter Morgan & Co and swept the entire acting awards in the category with wins for Gillian Anderson (Supporting Actress), Tobias Menzies (Supporting Actor) and Josh O'Connor (Best Actor).

For playing the eponymous character of Ted Lasso, an idealistic all-American football coach who, despite having no soccer coaching experience, is hired to manage an English football club, Sudeikis won the Emmy for Outstanding Lead Actor in a Comedy Series.

The show, which has been renewed for a third season, was also named the Outstanding Comedy Series.

Hannah Waddingham and Brett Goldstein brought laurels to Ted Lasso in the supporting actor categories in the comedy series segment. 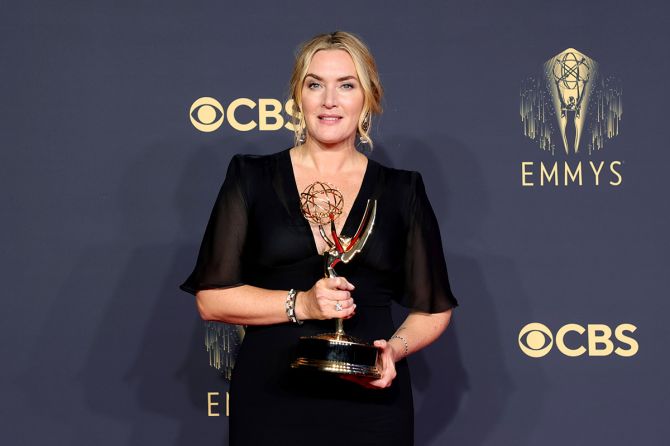 Mare Of Easttown, a police procedural crime drama, picked up three acting Emmys for its actors, including one for Winslet as Outstanding Lead Actress in a Limited Series or Movie.

Winslet won her second Emmy for playing the role of Detective Mare Sheehan, charged with solving a murder in a small town near Philadelphia.

Thanking the show's creator, Brad Ingelsby, for creating 'a middle-aged, imperfect, flawed mother', the actor said the show gave a chance for people to collectively talk about something other than the ongoing COVID-19 pandemic.

"Mare Of Easttown seems, I don't know, it is this cultural moment and it brought people together and gave them something to talk about other than a global pandemic and I want to thank everyone for watching our show," Winslet, who also serves as executive producer on the series, said.

Previously, the actor won an Emmy for 2011's Mildred Pierce. 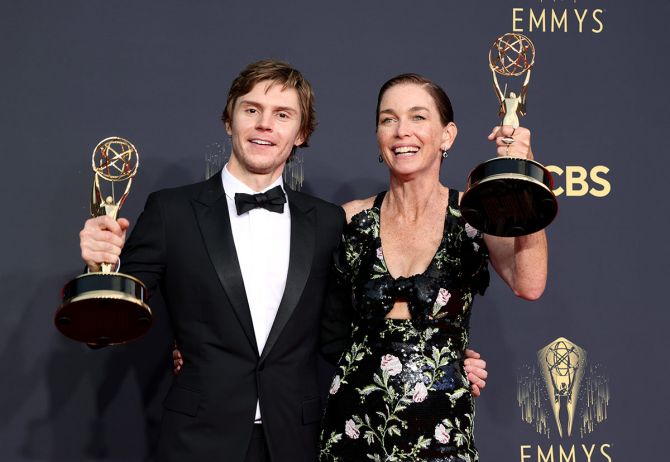 Julianne Nicholson, who plays Lori -- Mare's best friend and confidant -- in the show, was named the Outstanding Supporting Actress in a Limited Series or Movie.

Nicholson dedicated her win to co-star Winslet and "all the ladies out there in Philadelphia, in Kabul, in Texas or anywhere.

"(To those women) who are struggling sometimes, finding it hard to be happy sometimes, understanding that life can be a lot sometimes but never stopping, never losing hope, never giving up," she said in reference to the show, the Taliban's takeover of Afghanistan and the anti-abortion law in Texas.

For his turn as Detective Colin Zabel, the star-struck yet level-headed county detective called in to assist Mare, Evan Peters won the Emmy for Outstanding Supporting Actor in a Limited Series or Movie.

Smart, a Hollywood veteran who took home her fourth Emmy, was recognised as the Outstanding Lead Actress in a Comedy Series for Hacks. She was also nominated in the Outstanding Supporting Actress in a Limited Series or Movie category for Mare Of Easttown, in which she essayed the role of Helen, Mare's sharp tongued yet perceptive mother who is often at loggerheads with her daughter. In her acceptance speech, the veteran paid tribute to her late husband and fellow actor Richard Gilliland, who passed away six months ago.

"I would not be here without him, without his putting his career on the back burner so that I could take advantage of all the wonderful opportunities that I've had -- and my two incredible, unselfish children, Connor and Forrest, who are very courageous individuals in their own right -- they put up with mommy commuting to Philadelphia and back," Smart said.

Hacks scored two more wins in Writing and Directing (for a Comedy Series) for Lucia Aniello. 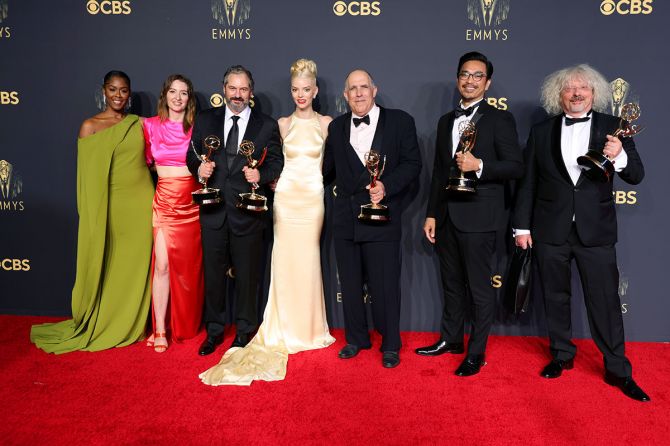 The Queen's Gambit is another entry in the winners' list, with the Netflix show bagging two Emmys for Outstanding Limited Series and Outstanding Directing for a Limited or Anthology series or Movie for Scott Frank.

Actor-writer Michaela Coel scored an Emmy in the Outstanding Writing for a Limited Series Category for her hit and critically-acclaimed series, I May Destroy You.

In the HBO show based on her personal experience, Coel stars as Arabella, a young woman who seeks to rebuild her life after she recalls being drugged and raped at a local nightclub. 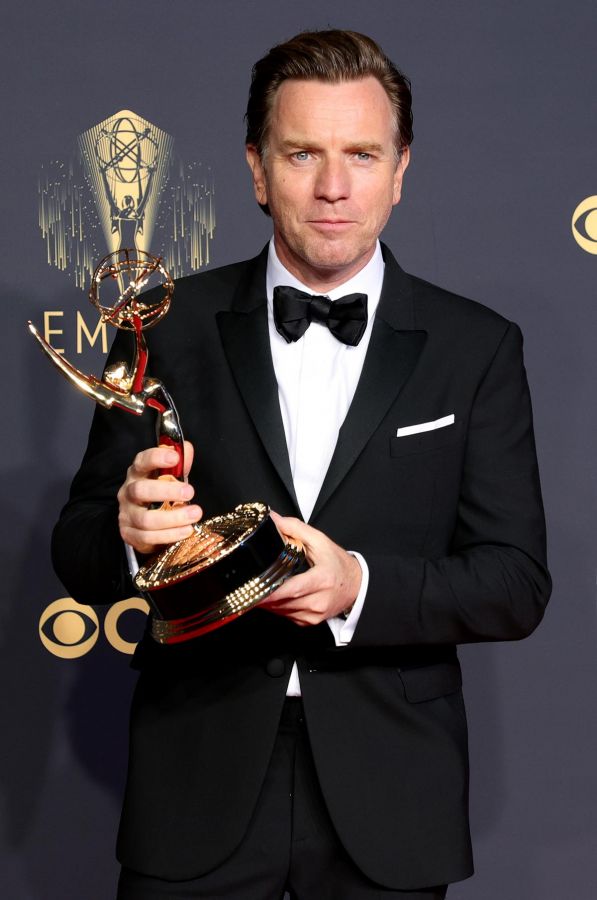 Ewan McGregor was adjudged the Outstanding Lead Actor in a Limited Series or Movie for his titular role in Halston. 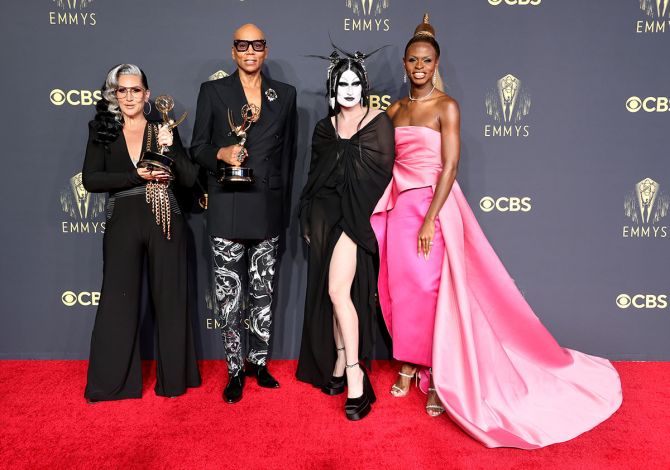 RuPaul's Drag Race won its fourth consecutive award for Outstanding Competition Programme; it marks host-creator RuPaul's 11th trophy and makes him the most awarded person of colour in Emmy history.

However, all acting awards across categories this year went to white actors despite the record nominee line-up.