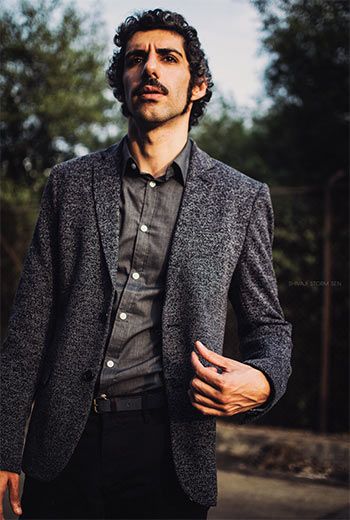 In Sonam Kapoor-starrer Neerja, Jim Sarbh plays the most volatile terrorist on board the ill-fated Pan Am flight, Khalil.

With his fine performance in the film, the young lad has grabbed everyone's attention.

He is a Parsi boy from Mumbai and a practicing theatre actor for the last four years, with no history of actors or acting in his family.

This, you tell him, is hard to believe.

Laughs Jim, "My father was in the navy. My mother was a physio-therapist. There are no actors in our family."

"I grew interested in acting on my own. Have been doing plays in English for four years. I am trying to take all the compliments for Neerja in my stride but I am as astonished as a child, who suddenly finds himself in a toy store."

When the role of Khalil was offered to Jim, he felt charged as an actor but a bit anxious about playing a terrorist.

"We are living in dangerous times. Playing a terrorist could lead to unexpected complications. But the writers of Neerja, Saiwyn Quadras and Sanyuktha Chawla Shaikh, made sure that my character did not come across as rabid religious radical shouting fanatical chants."

He adds, "Khalil is more like a member of a crime organisation. I played him as someone at the lower echelons of the organization desperate to make his presence felt, anxious to make his way higher up. Therefore, when he sees his leader in the hijack group faltering my character quickly steps in."

Jim enjoyed the challenge of creating a believable terrorist in Neerja. It is his first feature film and the actor is already working in his second one.

As soon as Jim wraps up shooting for Konkona’s film in Ranchi, he will head to Mumbai to be a part of for Kalki Koechlin’s theatrical debut as a director in The Living Room.

"I have just started in cinema. I hope to do a variety of roles," Jim promises himself.