'The hardest part was to get the best out of Alia'

'Alia's chemistry with Shefali was great, and you can't rehearse chemistry.' In the concluding part of an interview with Ronjita Kulkarni/Rediff.com, the debutante director reveals, "Alia absorbs a lot. I told her about the character and you realise later that she has absorbed everything because she brings small-small things to the table. Like you're shooting a certain scene and she remembers something you may have told her six months back, and she will suddenly bring it to the table."

Hamza is played by one of the most brilliant actors today, Vijay Varma. What did he bring to the table?

He prepped a lot.

We discussed Hamza, his back story, and there are pages of this.

Vijay likes to get into the skin of the character, he really wants to know the motivation.

We also discussed small things like, Hamza has this habit of staring at people. He keeps looking at people to figure out who is scheming against him.

In the prep, I had told him to stare people down and he loved it.

He would show it to me, and I would be like, 'Yeah, this works.'

So on set, it became very easy for us.

I would just say, 'Vijay, just do that staring thing', and he used to do it.

Vijay had an uncle who was an alcoholic, and he would drink a certain way. You know, in one shot.

Vijay had seen his uncle do that, and that's how he drinks in the film.

That uncle used to drink the whole bottle, and he would still be unfazed.

We tried so many things during the prep. Vijay did it brilliantly because he brought so many layers to it. Are you a Byculla girl?

No, I am not. But I spent three months there and met a lot of people.

In fact, Shefali (Shah) and Roshan (Mathew) also met people from there, so that really helped.

Once I went there, I realised the lingo is so interesting. It's a mad mix of Hindi, Marathi, Urdu and English.

This word 'mad' they use it a lot. And they will use the word 'deewana' in the same sentence.

In every pocket of Bombay, the language changes a little. It's such a cosmo place that it borrows from all cultures.

You brought closure to Alia's character, and helped her take her revenge as well. But life is not as simple as that, and these things sometimes never get resolved. Was it important for Badru to get closure?

Yes, it was very important. That's how she could walk away.

Badru thought that if I become a scorpion, he will live with me all my life. But if I walk away... Was it tough to convince Alia to produce this film and also star in it?

I took it to Red Chilies Entertainment in 2019, and we went to Alia almost immediately.

The pandemic delayed our shoot.

I did not have to convince her. I read the script to her and she instantly liked it.

She was very surprised and taken by it.

Also, she had wanted to do a comedy then.

She decided to produce it, which worked out very fine.

She's an actor on set, not a producer.

She's very spontaneous, but her prep is very heavy.

I told her about the character and you realise later that she has absorbed everything because she brings small-small things to the table. Like you're shooting a certain scene and she remembers something you may have told her six months back, and she will suddenly bring it to the table.

She's extremely giving towards other actors.

We all know that she's very talented. So for me, the hardest part was to get the best out of that.

With Alia, you just keep feeding her and it explodes in front of the camera.

She picked up the lingo so easy. She sticks to the script because the script is tricky in the sense. It's very plot-driven.

You can't change too many things because the comic timing also has to be real and natural.

We have seen her intense performances, but her comic timing is also brilliant.

Her chemistry with Shefali was great, and you can't rehearse chemistry. What made you castRoshan Mathew?

I had seen Choked and Muthoon and really liked his work.

Roshan lives in Kochi, so I met him for the first time on Zoom, during the pandemic.

He liked the script. I auditioned him just to see if we were on the same page.

And I knew I had found my Zulfi. You directed one of the stories in Dus Kahaniyaan, Lovedale. in 2007. Did that not bring you work as a director?

At that time, I was ADing on Dus Kahaniyaan, so I just happened to direct one of the stories.

Also, I realised that I wanted to write my own script and find my own voice. I was very sure of that.

I have written scripts for other directors too, like Force 2, the Pati Patni Aur Woh adaptation...

But I wanted to be sure of the film I would direct because somebody is putting so much faith in you.

Besides, after Dus Kahaniyaan, I wasn't going out and saying that I wanted to direct a film. I went back to assisting then.

I guess I wanted the story to come from within me.

Was the wait frustrating?

You know, it's like a singer's career. No singer records a song every day but you still have to do your daily riyaz.

I woke up and wrote every day, even though I was waiting to direct.

But while the film falls in place, you're still waking up in the morning, and writing something, whether it's commissioned work or for yourself.

It gives us so much joy to do that every day.

Lataji (Mangeshkar) had said (in an interview) that she wakes up and does riyaz every day, whether she recording or not.

I thought it's such a beautiful life to live!

You are waking up and doing something that you love.

So I write every day.

It's hard, it's competitive, but you are still doing what you love to do, and it's a privilege. 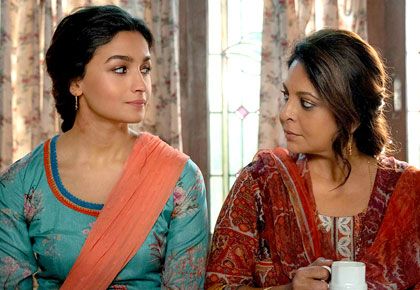