'Janhvi came into our lives thanks to Manish Malhotra.'
'He knew Janhvi for a long time and asked Karan to meet her.'
'He said, she has been doing natak from the age of four!'
'I made her do scenes from Badri just to see what she can do.'
'When I saw the scenes and how she responds to directions, I was convinced that I had found Parathvi.' It's not a regular Friday release for Shashank Khaitan.

His latest film Dhadak is a Hindi remake of the Marathi blockbuster Sairat.

Yet, the director claims there is no pressure.

After hits Humpty Sharma Ki Dulhaniya and Badrinath Ki Dulhaniya with Dharma Productions, Shashank is ready for his hat-trick.

"I have no film background, but today, Varun Dhawan and I are friends. He calls me and we discuss stories, take life decisions... he doesn't ask me because I'm an insider or outsider, but because we are friends. He doesn't care about my background," Shashank tells Rediff.com's Patcy N,

Sairat was close to reality, but Dhadak looks so glamorous.

Udaipur has glamour. I did not have to make any special effort to glamorise it. It's a beautiful place.

There has been a discussion about how I have stayed away from reality and made it a glamorous Dharma film, but I think when people watch the film, they will see that Udaipur is the character. That's how the city is.

There's a sense of royalty.

I am really fond of the city. I have travelled there a lot.

When I decided to make Dhadak, I was sure about basing it in Udaipur.

I wanted to capture the milieu of the city.

I understand that city.

There has been no effort to glamorise it or even to pull it down and make it look garib.

I have tried to be as authentic as I can.

The film is based in Lake Pichola, and that's how it looks.

If you stand on any terrace, it looks like the most beautiful place on earth. You have made small cities inspirational in all your films. How does Karan Johar react to it, since his Dharma Productions does not base its films in small towns?

He rewards me by giving another film! (laughs)

When I finished writing Humpty Sharma Ki Dulhaniya, my friends told me don't go to Dharma as they would never make the film. But that's the only company I have ever approached.

I felt if I have to face a 'no', I should hear it from them.

I narrated the theme to the creative team, and three weeks later, I was sitting in front of Karan Johar.

I think we don't give as much regard to Karan's intelligence as we should.

He has been a producer for so many years; he's doing something right.

He did not ask me why I was setting my second film in Jhansi. He just read the script and said it was a lovely story.

I think only when the film works, do the cities, where they are set in, work.

If the story fails, you can set the film anywhere, it doesn't matter.

The lead characters look so beautiful on screen. Are they inspired from Dharma?

They are more garib than what the people look like in Udaipur!

Thanks to online shopping, the biggest consumers are not us sitting in metros, but these cities.

We have a preconceived notion that people there dress in a certain way.

Unfortunately, when we make movies, we want to make the characters look garib/.

Madhukar Baggla (Ishaan's character) looks like any other boy in Udaipur.

Janhvi's character Parathvi is a rich girl, and she dresses up like how those girls dress up there.

Even when I was making Badri (Badrinath Ki Dulhaniya), a lot of people saw the trailer and felt it was too glamorous. But when they saw the film, they realised it was authentic. 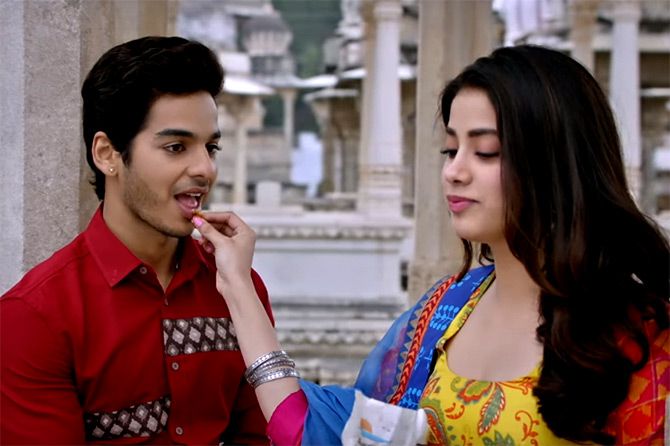 There have been a lot of comparisons with Sairat. Does that bother you?

When you make any creative work and put it out there, some people will appreciate it and some will dislike it. I don't react to it.

I do my job of making a film, promote it, and hopefully, people will see it.

If they like it, it's very good. If they criticise it, I will go back and reflect on what I did wrong.

I am grateful to get the opportunity to make movies. That's the most envious position to be in.

What made you adapt Sairat?

That film inspired me so much that the day I saw it, I told Karan I wanted to adapt it. That's what its impact was.

I have tried to be true to the essence of the movie and yet, give it my own voice.

I wanted to tell a story from my experiences and the topic was very relevant.

It's a topic that plagues our country till today.

I think we have been true to the essence of Sairat, but I feel Dhadak is our film.

Dhadak has its own unique language.

In Sairat, the young couple take refuge in Hyderabad. But you chose Kolkata.

I wanted the cities to be absolutely different.

It was essential to show the discomfort of the characters when they come to a place that is completely alien to them.

Having been in Kolkata, having known the city -- my nani is there, and I have travelled a lot in Kolkata -- I know how different it is.

When you are from Udaipur and suddenly land up in Kolkata and hear everyone speaking in Bengali, it can be extremely discomforting. 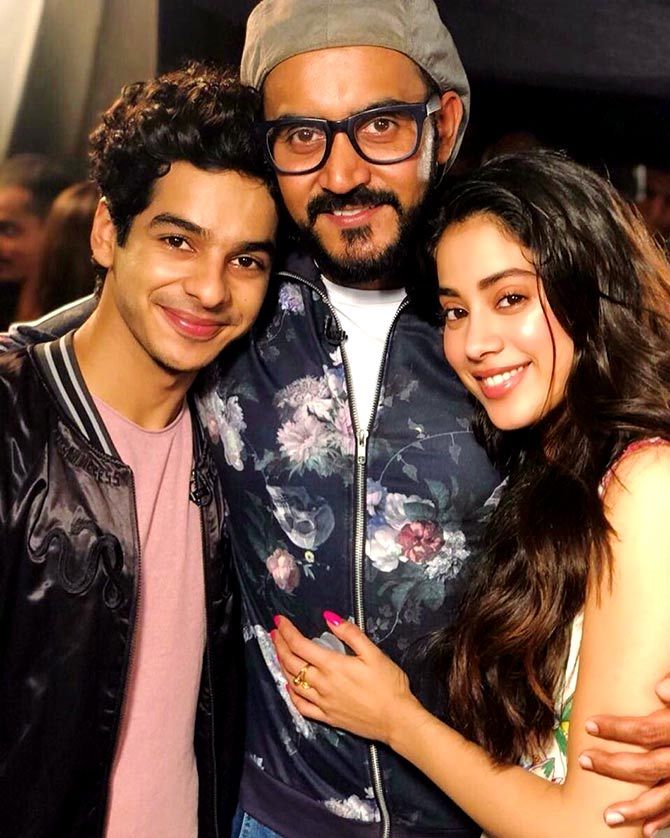 You are launching two star kids, and that's a big responsibility. How did you prepare them?

I met them even before Badri had released.

I started working with them since January 2017; the biggest process was to get to know them.

I didn't want them to come across as two star kids being launched. I wanted them to be characters of the film I had imagined.

With the love I got for Badri, I could have chosen to make any other film with bigger actors or maybe gone to Varun (Dhawan) and Alia (Bhatt) to make Dulhaniya 3. It would have been a good film and made lots of money.

But I chose to make Dhadak the moment I saw Sairat.

And to tell the story, it was important that Janhvi and Ishaan come across as characters.

When you watch the film, you will not see star kids; you see two characters -- Madhu and Parathvi -- and their journey.

We started the training from January 2017 to December, and then we started shooting.

I spent time with them and took them for my recces; we spent time in Udaipur.

They weren't famous then, so we could walk the streets of Udaipur and Jaipur and experience life.

We spoke to people, and discovered the character names in the process.

Were Ishaan and Janhvi under pressure because they have a legacy to match?

Janhvi did not ask me to give her a good scene because she had to look like her mother nor did Ishaan tell me that Shahid is a dancer, give me some dancing.

Janhvi's mother passed away during the making of the film. How did everyone deal with it on set?

From our end, we were there for her.

But it was she and her family, who dealt with the situation beautifully.

I cannot say anything about this situation. I have not experienced such a grave loss.

I was amazed to see how a young girl and her little sister dealt with it, and the professionalism they showed to return to the sets so fast. 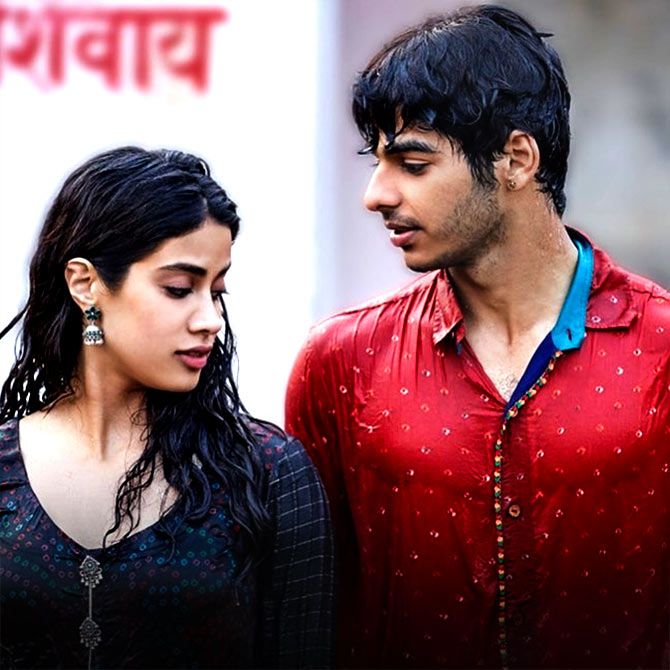 Did you feel out of place since you are working with star kids? What has the equation been?

I started off assisting at Yash Raj Films, Red Chillies and Subhash Ghai, and at that time, there was no 'outsider' concept. This debate started in the last two years.

Had this discussion started then, I would have probably left and gone back to Nashik.

Karan Johar never asked me, even at our first meeting, 'Who is your dad?'

He read the script and said, 'Hey lovely script, let's make some money!'

I think that's what people really care about.

Because of this debate, a lot of people feel they cannot make it in the movies.

It almost seems that if you are not from the film background, you can't make it.

I have no film background, but today, Varun Dhawan and I are friends.

He calls me and we discuss stories, take life decisions... he doesn't ask me because I'm an insider or outsider, but because we are friends. He doesn't care about my background.

If I have to scream at Ishaan for a bad scene, I will not think, 'Shahid ka bhai hai, main kaise daatoon? (He is Shahid's brother, how can I shout at him?' 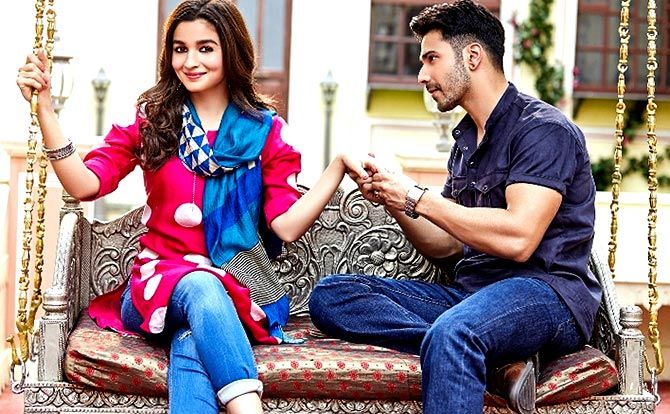 Did they give you a tough time?

No, I gave them a tough time!

Were they your choice or Karan's?

We were considering Ishaan for another film; I was involved in the writing of that film. But it did not happen.

So when I decided to make Dhadak, he automatically became an option.

Actually, we approached him because of his Instagram videos, where you could see the madness in him and yet, there was a likability.

Janhvi came into our lives thanks to Manish Malhotra.

He knew Janhvi for a long time and asked Karan to meet her. He said, she has been doing natak from the age of four!

Karan met her and asked me to meet her. She is a full Bollywood heroine!

I made her do scenes from Badri just to see what she can do.

When I saw the scenes and how she responds to directions, I was convinced that I had found Parathvi. 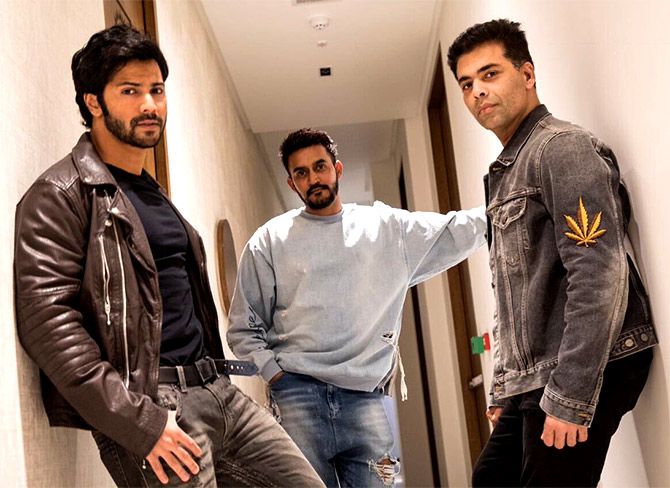 Can you express your views freely, working with a producer like Karan Johar?

It is the easiest.

Actually, Karan will not tell you anything. He gives you the film and says it is yours.

If you make a good film, you will reap the benefits.

If you make a bad film, you will pay for that too.

I was new in the company when I started with Humpty Sharma Ki Dulhania.

I never assisted Dharma, I straightaway became a director.

Initially, I would show everything to Karan, like my locations, casting options...

One day, he asked me, 'Why do you keep showing me all this?'

I answered because he was my producer.

So he said he wanted to see my final film.

He said, if I make a good film, great. If I don't, he will still give me another film, but this time, he would hit me!

This is the independence you get.

Whether it was Ishaan, Janhvi or any other actor, the choice of music -- it was my choice to go to Ajay-Atul again -- Dhadak was born out of my decisions.

There is a general perception that a replacing a caste conflict with a class conflict is safer.

Caste, class and the social economic structure are imbibed together. You can't cut off anyone because all of them are related.

So our film also touches upon those issues.

Of course, we need to be understanding and respectful to the fact that we are making a Hindi film.

It cannot get so state specific that other states feel disconnected from it. But we have definitely touched these issues.