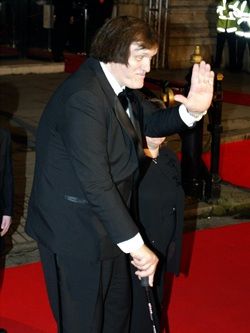 Richard Kiel, best known for playing the villain in James Bond with the teeth of steel, has died. He was 74.

Kiel's signature character appeared in the Bond films The Spy Who Loved Me (1977) and Moonraker (1979).

His Bond character of Jaws alongside Roger Moore was inspired by author Ian Fleming's description of a crook who went by the name of Horror and had steel-capped teeth in the 1962 novel The Spy Who Loved Me.

The Detroit native also stood tall as bad guys in TV shows including The Man From U N C L E, The Wild, Wild West and Kolchak: The Night Stalker and auditioned for the role as the mean green guy in the CBS series The Incredible Hulk, a

Kiel also worked as a nightclub bouncer and cemetery plot salesman before landing his first acting gig as a character called Bare Knuckles in the NBC series Klondike.

Image: Richard Kiel arrives for the World Premiere of the Bond film Die Another Day in London's Royal Albert Hall in 2002. Photograph: Kieran Doherty/Reuters
Source: PTI© Copyright 2021 PTI. All rights reserved. Republication or redistribution of PTI content, including by framing or similar means, is expressly prohibited without the prior written consent.
SHARE THIS STORYCOMMENT
Print this article