'When it comes to work, he forgets his sleep, his food, everything.'
'He is too involved in the process and that gives him strength.' 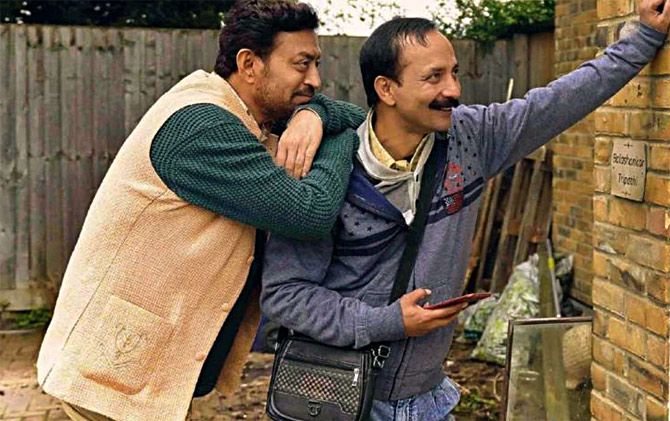 Deepak Dobriyal started his career with Maqbool, which saw Irrfan Khan in a stellar role. The actors got together once again in Homi Adajania's Angrezi Medium.

Dobriyal feels this is a good time for actors, as writers have been looking beyond the lead actors.

Like he tells Patcy N/Rediff.com, "Earlier, the writers wrote the script for the lead stars -- all the emotions and the best scenes were (reserved) for the lead stars. The dialogues were written for lead stars and for actors like us, they would say 'yeh toh sambhalenge, yeh toh improvise karlenge. They would take us for granted."

You worked with Irrfan in Hindi Medium and Angrezi Medium. Did you feel that he had trouble shooting the second time?

Yes, the energy level was slightly low. But as soon as the cameras were on or when there were script-related discussions, Irrfan bhai would get charged.

His main energy is his work, his commitment to the script and the director.

His job makes him forget the other things happening in his life.

When it comes to work, he forgets his sleep, his food, everything. He is too involved in the process and that gives him strength.

I can't say much about this; one day, he will say it himself. 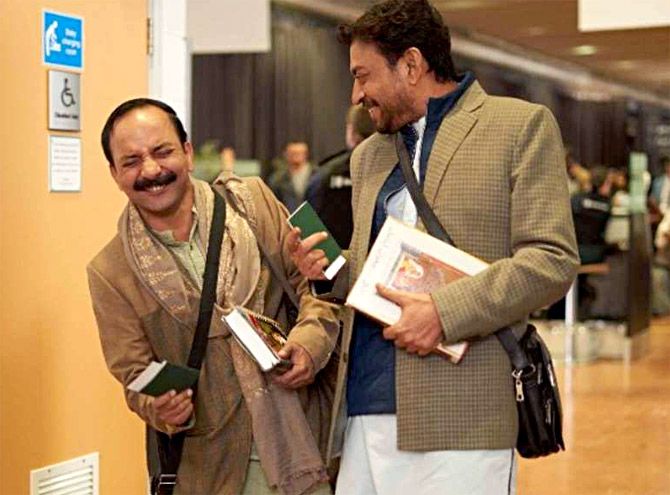 It was my duty to make Irrfan bhai laugh every day, so that he would get charged before the shoot.

When the shot was ready, about 30-45 minutes before that, we -- Anil Mehta (cinematographer), Homi (Adajania, director), Irrfan bhai and me -- would laugh, talk about funny incidents, joke, discuss funny scenes and just laugh.

Costumes, crew, everything, would be ready, but the shot would be canned only after Irrfan bhai said, 'Yeah ready.'

It was my daily job to make him laugh.

Homi took everything very slow too.

There was a comfort on the sets. The morning shoot was from 10 to 12, followed by a break till 2:30 so that Irrfan could rest. Then the shooting would begin again.

All my scenes were with Irrfan bhai, so automatically I would get as many breaks as him.

You were working with Radhika Madan for the first time.

She is a very dedicated and enthusiastic girl.

When I saw her for the first time, she was sitting in a corner with a script. The moment I passed her, she was in the character and she called me 'Gopi chachu' and called Irrfan bhai 'Papa'.

She made friends with the local girls, lived with them and went out with them.

I was impressed by her. 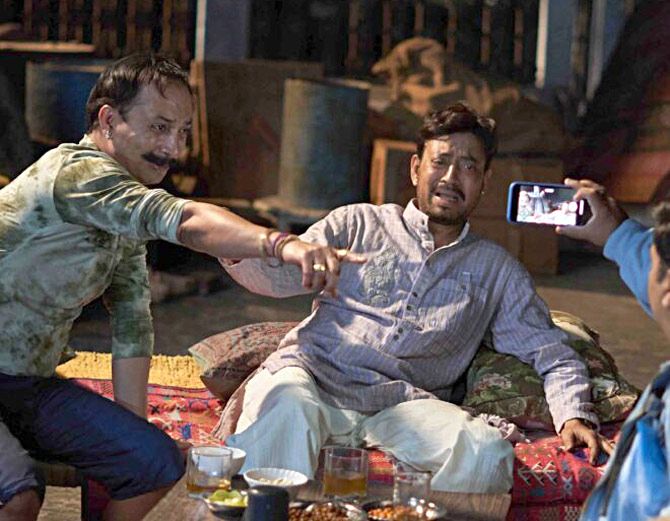 How do you prepare for your roles? Are you spontaneous?

Then I start thinking about the thought process of my character, whether he is easy, temperamental, intense, deep...

After that, I start looking at the financial background of the character, like how does he earn.

Then come the physicality, the looks. Then, the psyche, what has he faced in life.

If the writer has written a good script, you can automatically play around the character and do a good job.

Do you think this is a good time for actors?

Now, supporting actors have made their own world and want the writers to look at them, especially actors like Seema Pahwa, Divya Dutta, Pankaj Tripathi, Sanjay Mishra, Vijay Raaz and me.

We have created our own place and that is forcing writers to write for us.

Earlier, the dialogues were written for lead stars and for actors like us, they would say 'yeh toh sambhalenge, yeh toh improvise karlenge.' They would take us for granted.

We felt insulted. Why are they not writing for us? Why should we improvise?

Earlier, the character artists would come at any time and disappear. They did not have a proper story in the film.

Their job was just to help the hero.

They themselves would not have anything; they would be lawaaris (orphan) and wafaadar (honest). They would be khuda ke bande (God-sent) for the hero and ready to sacrifice anything.

All these things are changing now. 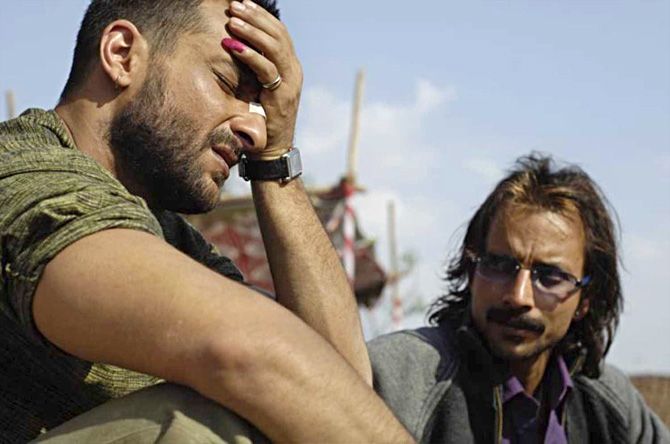 Which film changed your career?

Omkara. But I did not say yes to all the films that came my way after Omkara.

I kept looking for good scripts and I waited.

I was waiting for good films right from the beginning, but I think I waited too long. I am going to complete 16, 17 years in this industry and I have done only 25 films.

I love to cook, do some gardening, play chess...

I fly kites, play with kids and dogs.

I have a lot of writer friends whom I meet up.

Youngsters who come from all over India like UP, Bihar, Kashmir, Rajasthan, Madhya Pradesh... to pursue their dream of acting, I meet them every 10 days and guide them.

I try to remove the fear of struggle from them just by talking to them.

Everyone has my number, right from my sabziwala to anyone... they call me directly. 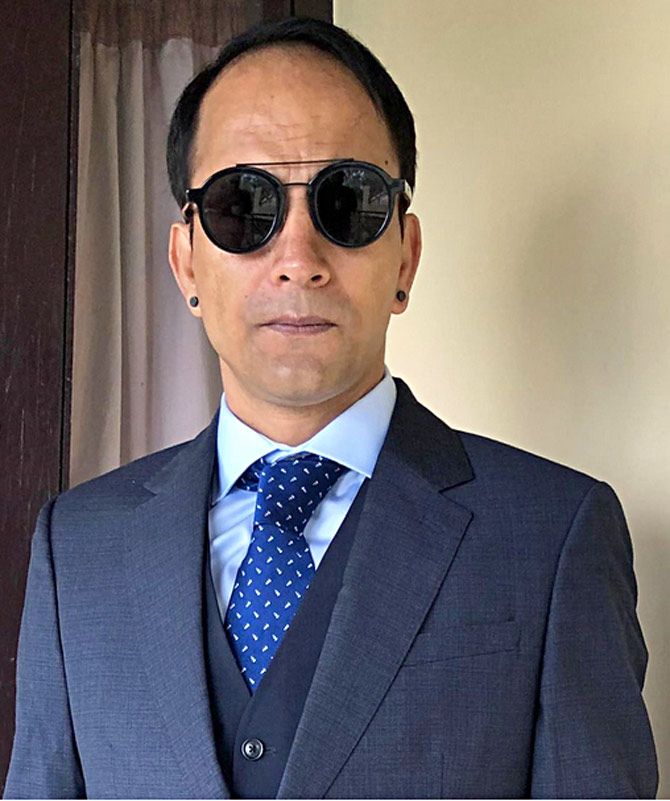 Any plans to direct?

I have written a children's film.

I have some ideas and concepts and want to make a film some day.

I have to be a better organiser and only then can I direct. 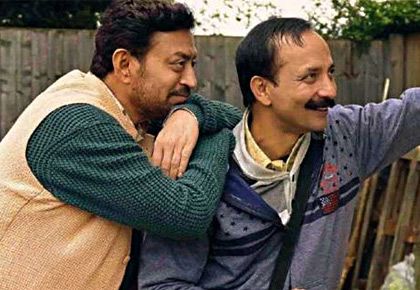