Is Tees Maar Khan a Hollywood rip off? 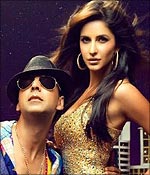 The promos of Farah Khan's latest movie Tees Maar Khan are getting rave reviews and critics have already started mentioning that this might be the movie which might get Akshay Kumar back in business.

But what is not very flattering is the fact that the film, directed by Farah Khan and written by her husband Shirish Kunder, seems to be a rip off of a Hollywood film.

The storyline of Tees Maar Khan is very similar to Peter Sellers' 1966 Italian film After The Fox (Caccia Alla Volpe).

In After The Fox, Sellers plays a thief and a master of disguises, who escapes from an Italian prison. He meets up with his friends and plans to retrieve the 'gold of Cairo', a large shipment of gold that is being unloaded somewhere in Italy. He then hits on a perfect plan. Posing as a famous director, he finds the ideal coastal village to unload the shipment, and persuades the entire population that he has chosen their village as the set for his new movie.

Watching the promos of Tees Maar Khan, where Akshay plays a conman parading as a director while trying to pull off a heist, one does see certain similarities.

Inspired or not, we hope that the film entertains.