'He's got such incredible resilience, such an incredible spirit that we were feeding off his strength rather than him feeding off ours.'
'Sometimes I look back and cannot figure out how the f*** we made this movie.' 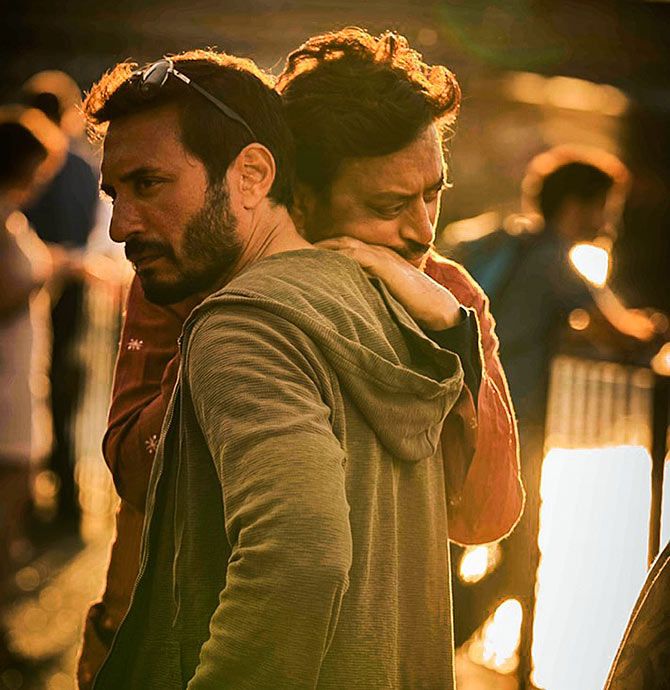 In his 14-year career, Homi Adjania has directed only four films.

He was busy living life!

The director does not hold back, either on expletives or on his life and choices, or on working with Irrfan on their film Angrezi Medium.

Working with the actor, who was undergoing cancer treatment at the time, was a life-changing experience for Homi in many ways.

He tells Patcy N/ Rediff.com, 'Earlier, I was so finicky and bothered about the aesthetics and things that I had no control over. Like, I would get flustered if the light was going -- if the sun is going to set, you cannot stop it from setting but still, we act like such idiots. My experience with Irrfan made me realise that.'

It's been four or five years since...

...What was I doing, yes, I know your question.

I have been living life, which is a full time job.

I love scuba diving, and I spend a lot of time doing that.

I love my kids, and I spend a lot of time bringing them up and hanging out with them.

I do adventure sports.

Then I come back and make a movie, when I find a script I want to make.

I am a pain in the a** for my producer because if I get a script, I don't get my cast.

If I get my cast, suddenly I feel the script has not reached where I wanted it to be.

So I pull the plug on the movie.

So according to my producer, Mr Dinesh Vijan, I am the most expensive resource he has... doing nothing! 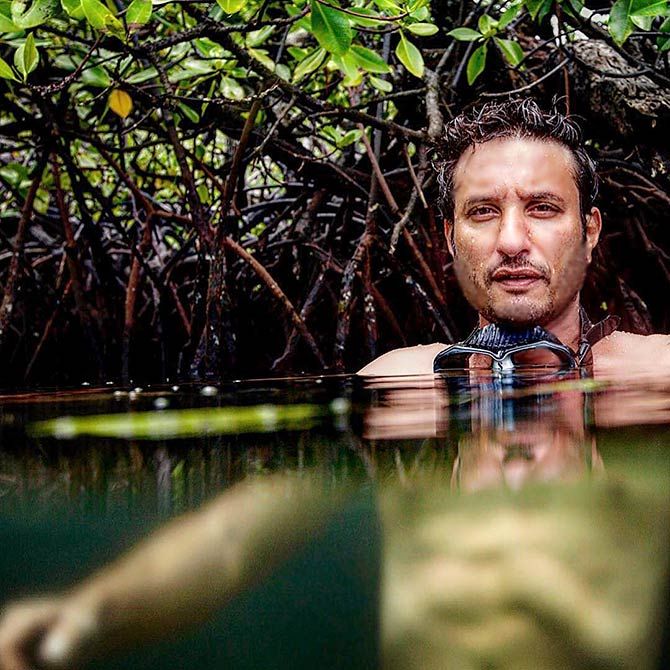 Where do you go scuba diving?

I used to teach in the Lakshadweep islands many years ago; now I go all over the world.

Three years ago, I was in the Galapagos (in Ecuador) doing a shark expedition. At 3 am, my ship hits some rocks and sinks. Luckily, we escaped and no one died.

I also spend time in the Andamans.

How many stories have you actually scrapped?

I pretty much pulled the plug on Takadhoom eight days before it was supposed to roll.

There are at least two others -- one was a dark film about a schizophrenic serial killer. I was working on that when Dinu (Dinesh Vijan) called me to his cabin, as he wanted me to hear the narration for Angrezi Medium.

I said, I'm going to direct this film.

Dinu is a smart guy. He always wanted me to direct it but he wanted me to say it, so I couldn't throw it back at his face.

As I am getting older, I feel it's time to spread laughter, love and joy because honestly, there's no better feeling than when you are in a theatre, hiding at the back and watching the public watch, and when they all start laughing, it's so satisfying.

When I heard this material, I realised that I could do it.

I think after this experience, I have become lighter.

Sometimes we take ourselves a bit too seriously in life.

Also, we make the craft such a big deal.

I feel we are making a movie.

We are not f***ing curing cancer.

We are not sending someone on Mars.

We aren't doing anything big.

We are just telling a story.

So chill and just tell it, yaar.

Irrfan and I wanted to collaborate since I met him for the first time at the premiere of Namesake.

After the movie, I was sitting in a bar nearby and Irrfan came over. I said, 'Oh my God, you're the guy from the movie. You were phenomenal!

We got along well that night -- we left in the morning! -- and after that, we kept bumping (into each other) like old friends.

He kept saying we should do something relevant, but nothing materialised.

When this came, I really wanted to work with Irrfan. 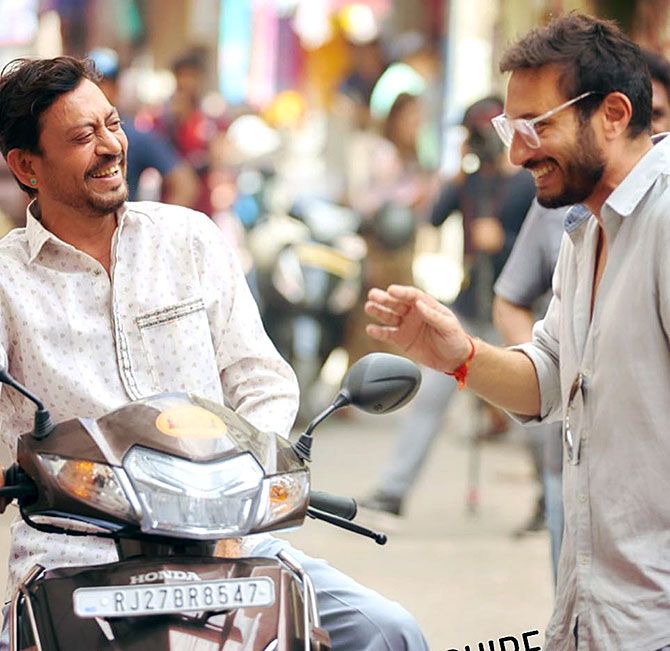 Was the shoot easy since he was undergoing treatment?

There were good days and bad.

It was not a standard shoot, the shifts were lighter.

My main concern was how he was feeling. At no point would I push him.

Sometimes I look back and cannot figure out how the f*** we made this movie.

Irrfan fell sick right after the announcement of the film. How did he agree to do the film even after being sick and what made you wait for him?

There was no question of doing the film without him.

I would have not done it myself.

I would have not done the film if it was a sequel to Hindi Medium.

I loved Hindi Medium as a film, but as a creative person, I was not interested in taking someone else's creativity and pushing it forward.

For me, it was interesting because they told me it's a blank slate with new characters and a different story. Just thematically, it pushes the franchise forward.

That was about the educational system.

This is more about an interpersonal relation between a father and a daughter. She wants to go abroad and study but more than that, I think she's just fascinated with the idea of going abroad. 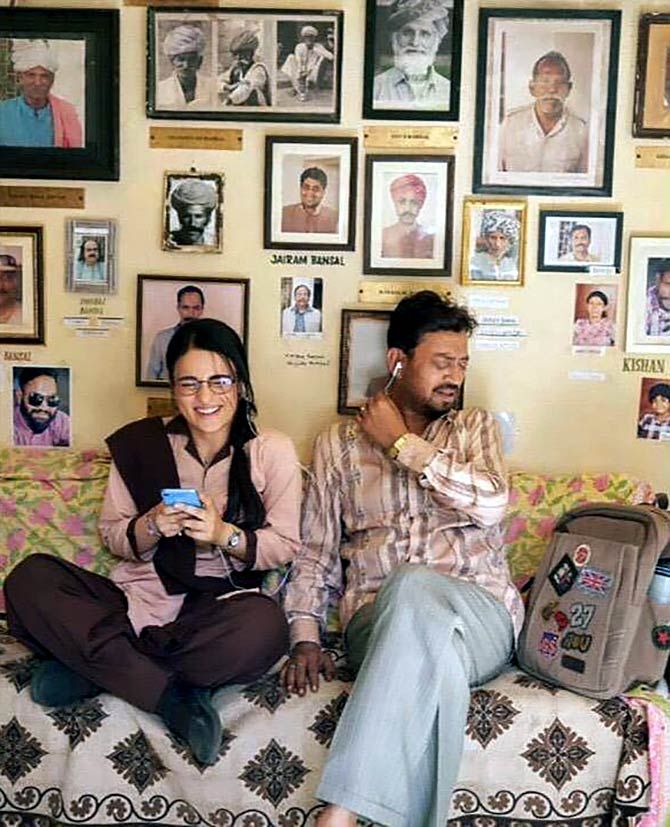 There were days when we had to wrap up early and not finish what we had wanted to. But like I said, it changed my view about film-making.

Earlier, I was so finicky and bothered about the aesthetics and things that I had no control over. Like, I would get flustered if the light was going -- if the sun is going to set, you cannot stop it from setting but still, we act like such idiots. My experience with Irrfan made me realise that.

I spent some time in London with Irrfan when he was undergoing treatment. We would just hang out, go to the park, go for exhibitions, have lunch, chat...

I realised that we, as human beings, are such idiots.

We complicate our lives with trivial things that have no bearing on our lives.

It's our default, as a species, to mess things up.

There were rumours that Irrfan did not have money and that's why he did the film.

He has money, he doesn't have any issue with that.

In fact, at the end of it, he asked me, 'You are not going to die? You all behave like you are going to live forever!'

He said, 'It's not that I am going to die, but yes, I am ill. That does not mean that I should stop living my life. Maybe it's more difficult but the day you stop living, what's the point?'

He also said, 'Homi, mujhe mere craft se bahut mohabbat hai. I don't like the other shit that comes with it. I'm not interested in all those trappings anymore.'

A funny incident happened when we were sitting in a cafe in London. A young firang fan came up to Irrfan, and said, 'Oh my God, you are Irrfan! You are my favourite actor. I love you, blah, blah, blah...'

He said, 'What a great moment for me to meet you. I am so happy for you that you're experiencing this moment.'

He has become such a giver, he has fully changed.

He could see her hand going to her pocket to get her phone.

He said, 'Don't do that. There is no reason to take a photo, you wanted to meet me, right? You want to cherish this moment? You don't have to show your friends that you got this. It's not for anyone, it's for you. The sooner you realise this, you will be on a happier path.'

He loves the craft of acting; I have never seen him act like this in any movie. He is so sensitive in the way he has performed.

I think it's also to do with the fact that he is playing a single father, so he's a father and mother to his child, he's a friend to his child.

Those layers are so endearing and beautiful. 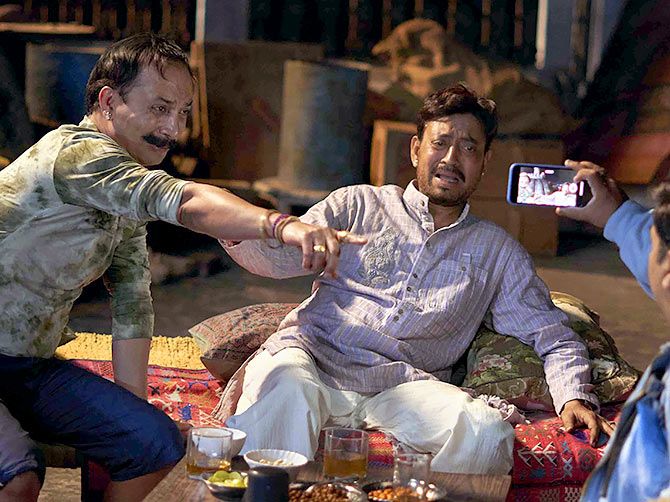 Irrfan has a dry sense of humour.

Sometimes he looks at me and says, 'Do you even think before it comes out of your mouth? You are such a mad bawa, only you can say things like this.'

The reason why we got along so well, why the crew was at ease considering the circumstances was because at no point did he tiptoe around the issue.

We spoke and laughed about his illness.

We cried about it.

He doesn't want your sympathy.

He doesn't want your pity.

He wants your love. You are an adventure enthusiast and you had a person like Irrfan in front of you. Did that change your perspective towards life?

I was telling my wife the other day that if we teach our kids to be empathetic, loving, kind and respectful, we have done our job.

I don't care how they do in school, what marks they get.

We must teach people to be good to each other.

I am a hardcore feminist and I teach my kids to be as well.

Irrfan cannot promote the film and I don't expect him to do it either.

I called all the girls in the industry and told them that I wanted them to do a song for me.

It's called Kudi Nu Nachne De, the girl dances to her own beat and the world will become a better place.

The song comes in the end credits.

It's such a beautiful song, and they have all selflessly pitched in. 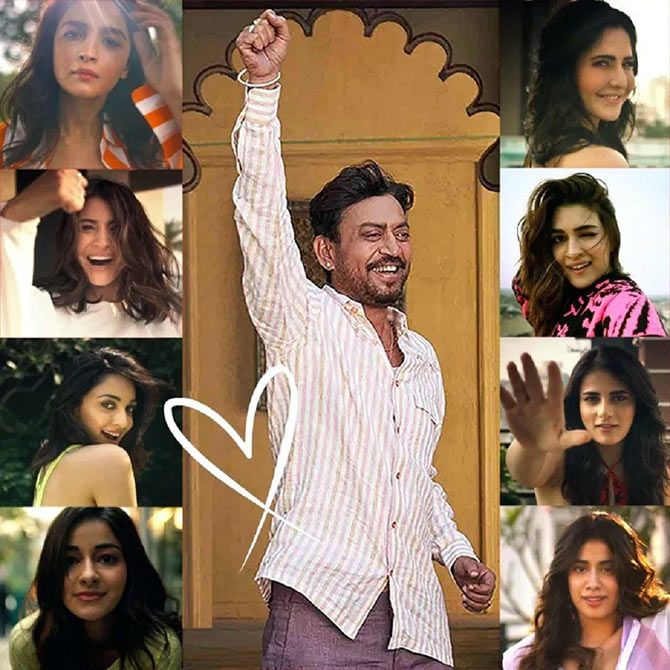 IMAGE: Irrfan with the ladies from the song, Kudi Nu Nachne De.

Deepika was not well.

She was so upset she couldn't do the song.

I couldn't wait because we need to push to promote the film.

Will you ever remake a film?

I may not know how to.

If you ask me to make Cocktail or Finding Fanny or Being Cyrus or even Angrezi Medium again, I would not go into that space because I already know how to do it. I have no interest in that.

If I do something, I need to be uncertain.

I need to have a certain amount of fear.

If I can make an adaptation, where it's not a complete remake, I can do it. Some people just take a film and regurgitate it in a different language.

The closest example I can give is the way Vishal Bhardwaj adapts Shakespeare.

It's a full adapt that takes a lot of creativity. I can do a remake then.

But having said that, I have been offered a lot of remakes from various producers and actors, but I don't have much interest in them.

What about the OTT platform?

I have written a story, which the writers are developing as Saans Bahu Aur Cocaine.

It is basically about a matriarchal family living in a crumbling haveli where the men don't work. Some of them may be working abroad.

The women in the family -- the two bahus, the daughter and the mother -- have an embroidery business.

But it's actually a front for the biggest cocaine cartel in South Asia. 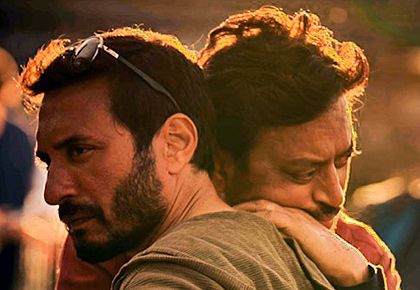