India's Got Talent champs to sing for Obama

By John W Thabah
Last updated on: October 29, 2010 18:05 IST
John W Thabah reports from Shillong on the Choir that will once again make waves, this time before an American president. 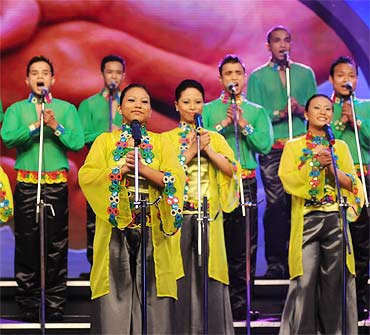 Their style is both unique, and heartwarming.

After charming India, they now hope to win over United States President Barack Obama and his wife Michelle.

The Shillong Chamber Choir, which recently won the popular television show India's Got Talent -- Khoj 2 will perform for Barack and Michelle Obama, most likely at President Pratibha Patil's State dinner at Rashtrapati Bhavan on November 8.

In their quest to win India's Got Talent, the Choir merged hymns with popular Bollywood classics (click here to see video), creating unforgettable melodies that made the Meghalaya-based group national champions.

Ask them about their plans for the Obama concert and Damon Lyndem, bass singer and media coordinator for the choir, says, "We will be able to give details of our programme by November 7."

Sixteen of the Choir's members, including pianist and conductor Neil Nongkynrih, will leave Shillong for New Delhi on November 6.

Choir members don't know where they will sing for the American President and US First Lady nor do they know how much time they will get to rehearse in the capital.

But the Choir, winners of the World Choir Olympics in China, are sure of one thing: Their performance will be a musical feast, for certain.