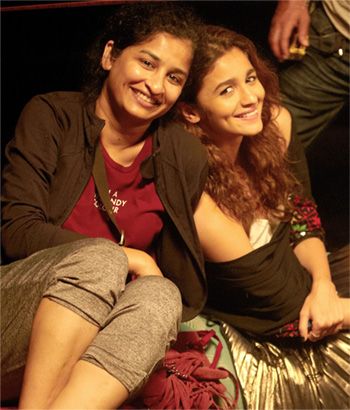 'We always tell children to touch the feet of elders. But why?'
'Why can't a child be respected?'
'You have to be very equipped to even want to have children.'
'There are entrance exams for even MBAs... and this is a life we're talking about.' 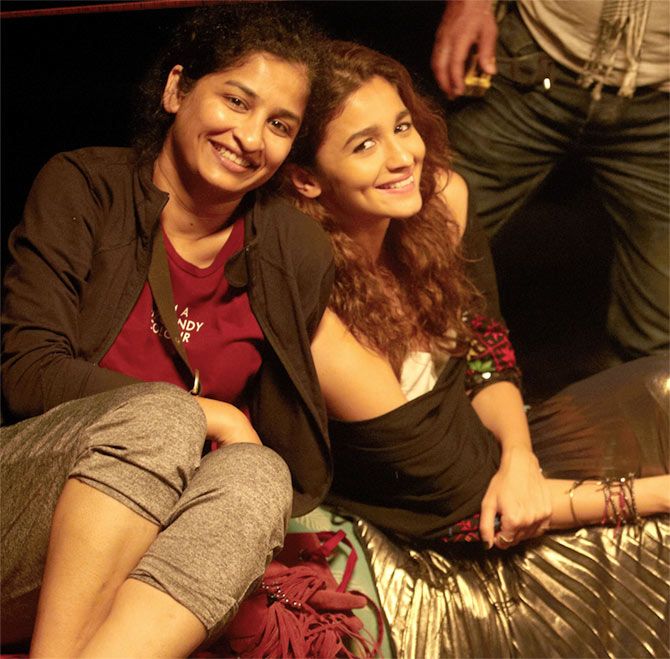 "I'm very much of a romantic," director Gauri Shinde tells Rediff.com's Ronjita Kulkarni at her office in Khar, northwest Mumbai.

She would love to make a hardcore romance movie someday.

But for now, she is basking in the rave reviews her second film Dear Zindagi has brought in.

Starring Alia Bhatt and Shah Rukh Khan, the film is a beautiful and sensitive take on a young woman's angst and how her meeting with an unusual shrink help her navigate her way through the turblulent waters of existence.

As my colleague Divya Nair pointed out earlier this week, Dear Zindagi has some wonderful life lessons that we can all learn from.

People who know me really well have been saying this.

I think we've influenced each other a lot and we will probably sound like the same people for some time until we break ourselves from each other!

I'm very particular about what my actors are wearing so I guess a sense of what you like also goes in.

Which is your favourite moment in the film?

There are so many.

But the last session does something to me.

I have written it, shot it, edited it, run over that scene so many times in the edit room and still I feel something...

I feel like I become a viewer when I see that.

When Alia's character is leaving the place and it's looming large that this is the last session. 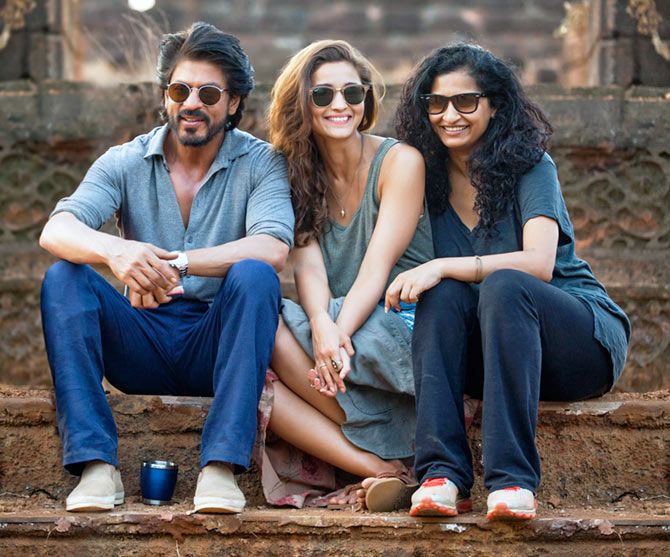 Did you always want to make movies?

I wanted to be a businesswoman at first, but I realised that I suck at numbers. So I started with advertising.

I wanted to work right after my Class 12, in the summer holidays. So my father got me an internship at Pratibha Advertising in Pune. That was my first taste in advertising. I was there for two months.

Then I did my Mass Communication with Symbiosis.

Films were never on my mind. Of course, I loved watching films.

I did a course in filmmaking in New York. I made a short film there.

I got excited thinking I could make ad films. I never thought about feature films.

I have always wanted to come here. I always thought it was a freer place, I could be independent here, could work here. The kind of stuff I wanted to do -- advertising -- had more scope here.

I worked with Siddharth Kak on Surabhi right after my post grad. I was in Lintas for the maximum time and met Balki (her husband, adman and filmmaker R Balakrishnan) there.

So when did films enter your mind?

Balki used to talk about wanting to make a film, that's when those influences came in.

I was already a director making ads, so films were the natural culmination.

But when I saw Balki directing Cheeni Kum, I thought this was damn tough!

It seemed so laborious that for some time, I said I'm not sure about making a film. We got married just before Cheeni Kum's release.

People told me I should try making a film. Also, the short film that I made in New York... that's when the germ actually came in my mind, but I wasn't confident at that time.

That film had gone to the Berlin International Film Festival. I promised myself that I would shoot my first film in New York because I loved the city so much. And that really happened, of course, many years later.

But I was really just waiting for the most compelling subject before I actually made a film. 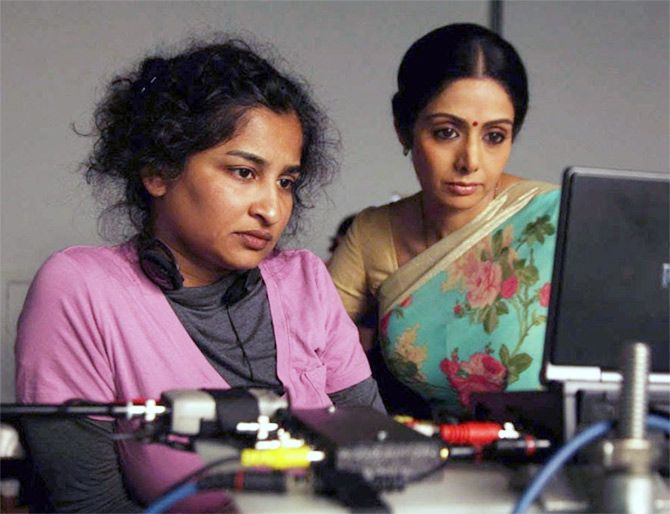 IMAGE: Gauri Shinde studies a scene in English Vinglish, as Sridevi watches along.

You've said that Sridevi's character in English Vinglish was based on your mother.

It was inspired by my mother. But this character is like so many mothers and women in India.

It happened when I was in New York. I was thinking about a middle class woman, who doesn't know English over there.

It was just a line that came to me. I called up Balki and asked what he thought about it. He said it sounds really good and you should write it.

I had gone to New York for a screenwriting course. I attended it for two, three days, but I didn't like it from the first day itself because they said that Woody Allen's films are not the films you should be using as an example.

I am a big fan of Woody Allen and I decided that I did not want to be there. So I left it and wanted to come back to Mumbai. But in fact, on my way from the school to my home, I thought about this idea.

Both your films deal with the parent-child relationship.

Maybe I'm stuck somewhere there, I think most of us are.

That's where everything starts.

That's the most important relationship in our lives.

I realised this much after English Vinglish that my first film was from a parent's point of view and my second film is from the child's point of view. I think it's interesting to have both viewpoints.

In our country, we treat parents almost like Gods.

They are faultless. That's a very high thing to follow. Nobody is God-like. We are all human beings with flaws.

Children need to be respected. We always tell children to touch the feet of elders. But why?

Why can't a child be respected? They are far more innocent and fragile. That's what needs to be respected.

There is so much we don't look at. For example, in English Vinglish, nobody asked the child's point of view at all, why she was behaving like that.

Now, with Dear Zindagi, one or two people have asked but what about the parents?

We always think about the parents, not the children.

Nobody till date has questioned about the children (in English Vinglish). Of course, the parent was the protagonist and that's how the story was, from her point of view. But this was still never questioned.

But when a child does something (in Dear Zindagi), there's always an 'arrey but...'

I feel very strongly about these things.

Children seem to be an important part of both your films. What do you think about having children?

You have to be very equipped to even want to have children.

There are entrance exams for even MBAs ...and this is a life we are talking about.

The biggest job in the world is to parent someone.

Young people need to be tested if they are ready to be parents.

Unless you are really equipped to take up this job, it is best you don't. 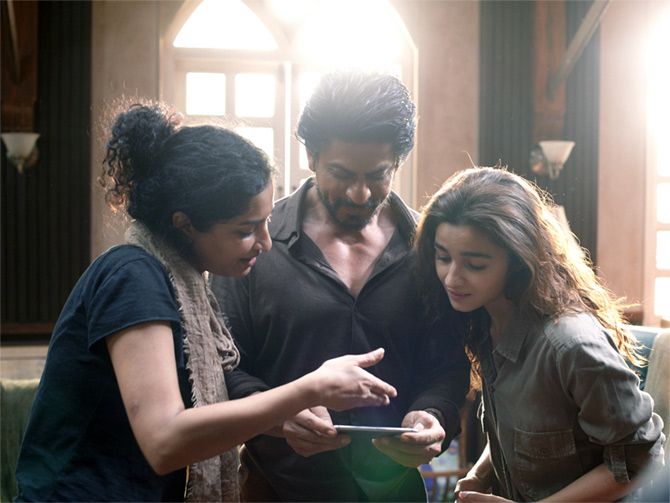 IMAGE: Is it a take? Gauri, Shah Rukh and Alia gather around for a closer look.

You have become the female version of Rohit Shetty: You've brought your own brand of cinema and are churning out hits.

I wish I can give hits like Rohit Shetty!

I believe it is important to make money because this is also a business. It's not just an art form for self-indulgence.

I definitely feel that pressure that it needs to do well. I don't want people to lose money. They should make money and it should be a viable project.

Because of my subjects, I've always maintained a very conservative budget. That's how I've been in advertising too. I don't overspend.

Romance is never a mainstay in your films. It's always a subplot. Why is that?

Enough has been said about mainstream love stories though I love them.

I am a sucker for love stories. That's the first genre I want to watch if given a choice.

You seem to be a Shah Rukh fan.

For our generation, he's been the representative of romance!

Of a gentleman you feel respected by. That's the sense you get from his aura. 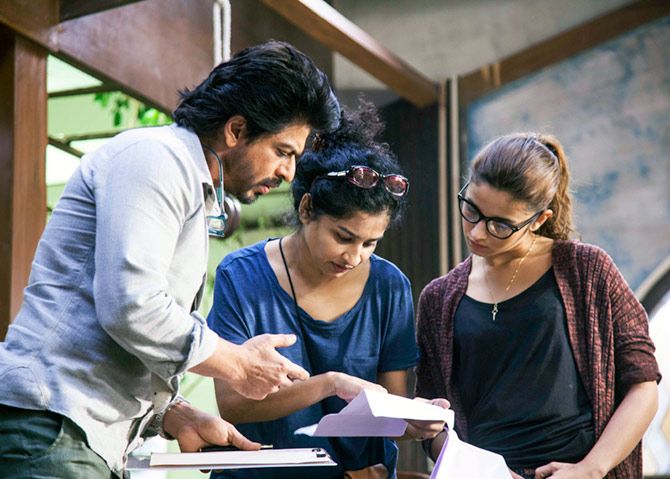 What does Balki think about your films?

Balki has been there through both of my films. He produced the first one. Here, he is been there silently, but very much there.

He has cried in both the films. Till date if he sees Sridevi's speech, he'll have tears in his eyes. The same is with Kiara's breakdown. Both films have affected him.

Do you cry during films as well?

Do you enjoy watching movies or do you end up critiquing them?

When I watch a film, I just surrender to it. I don't think about camera angles etc.

I may think about it later, but while watching it, I watch as an audience.

How often do you watch films?

Balki and I used to watch every single release, but now, with lack of time, we've become quite choosy.

I would like to watch a movie a day if possible, and I don't mean only in theatres. I mean on Netflix, or DVD, or iTunes... 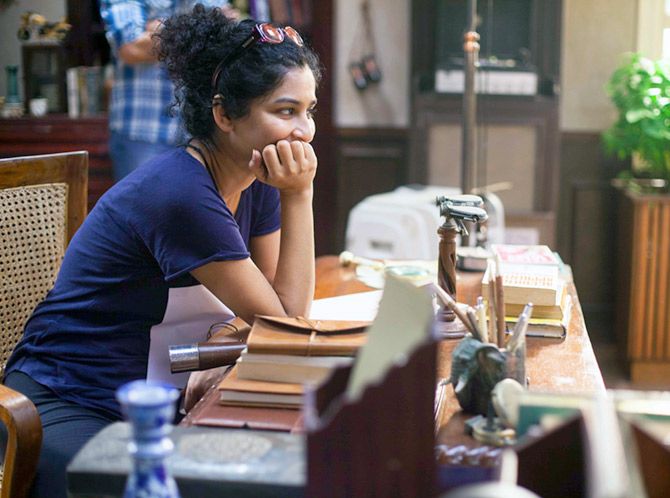 What's the one genre you will never make?

I will definitely not make a horror film. I get very scared of horror films, so I can never see myself making one. The film might end up being a horror -- not good at all!