'If you make a film on sex, you don't need to be vulgar'

'It was fun trying to regulate ourselves and keep it in the family zone, and yet be tongue-in-cheek.'
Ronjita Kulkarni/Rediff.com meets director Shilpi Dasgupta to find out what it takes to make a film like Khandaani Shafakhana. 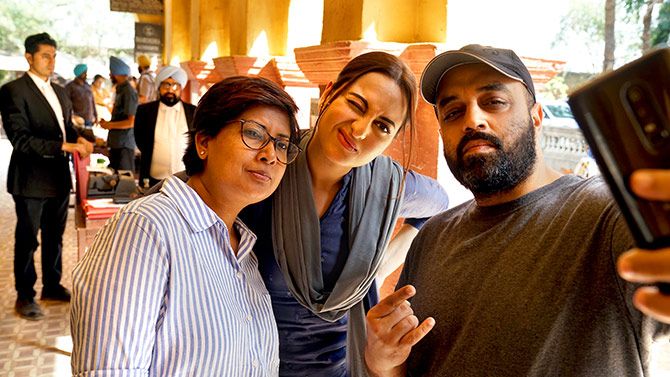 IMAGE: Shilpi Dasgupta with Sonakshi Sinha and Mrighdeep Singh on the sets of Khandaani Shafakhana.

The first thing you notice when you walk inside Shilpi Dasgupta’s workplace is the large glass balcony overlooking Mumbai’s glorious sea. The choppy monsoon waves seem to be reaching for the low, dark clouds, making it a perfect picture view.

But Shilpi has her back turned to it.

What she’s working on is far more beautiful to her -- her first feature film, Khandaani Shafakhana.

Starring Sonakshi Sinha, Varun Sharma and Badshah, the film tells the coming-of-age story of a girl who inherits a sex clinic and takes it upon herself to spread sexual awareness in the neighbourhood.

She loved the story so much that she hasn’t take a single day off from the time the project took off two-and-a-half years ago.

There’s a thin line between good content and slipping into vulgarity when a film deals with sex, and Shilpi says she realises it.

“We have been true to the aesthetics of the subject and deliberately not ventured into things that will tickle people in the wrong way.

“People enjoy vulgarity, always have, but the script did not need it. And that was the whole point. If you make a film on the subject, you don’t need to be vulgar.

“It was fun trying to regulate ourselves and keep it in the family zone, and yet be tongue-in-cheek.” 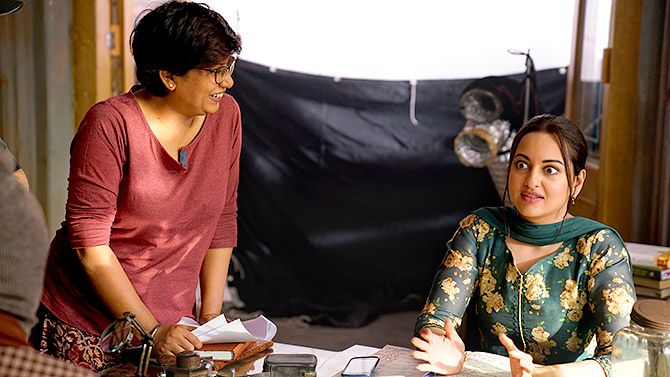 IMAGE: Shilpi with Sonakshi on the sets of Khandaani Shafakhana

Khandaani Shafakhana appears to belong to a genre that's quite trendy these days. From Vicky Donor to Shubh Mangal Savdhaan, there have been films that don’t hesitate to revolve around sex and the issues common people face.

How is Shilpi making her film different?

“This is the story of a girl and that’s a huge difference from the films that have come out with bold subjects,” the 40-year-old Bengali director explains. “Vicky Donor was about a guy, Shubh Mangal Savdhaan was about a couple. This is about a middle-class girl named Baby Bedi, who is a medical representative in a small town.

“The moment she’s a middle class girl, there’s a family involved. There’s a brother, a mother, an uncle, a mama... it’s small town India, a set-up I am very familiar with,” says Shilpi, who hails from Bhopal.

“When I tell a story in this milieu, it automatically opens up a vast audience because 75 per cent of India is living that life.” 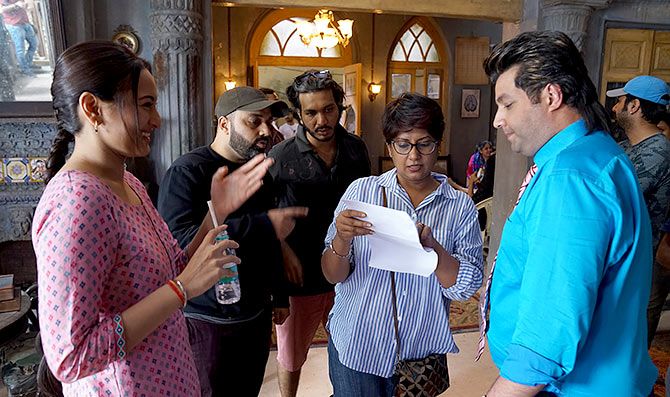 IMAGE: On the sets of Khandaani Shafakhana.

How many city-bred young folk would actually know what ‘Shafakhana’ is? What made her include the word in the title?

“The film is about a small town sex clinic and, since I’m from Bhopal, it’s not an alien word for me. People from Utter Pradesh, Madhya Pradesh and Punjab know this term very well,” Shilpi answers.

“The moment you enter a small town -- whether you get off a train or a bus -- all the walls have these adverts on them. The word brought back a lot of memories.”

Khandaani Shafakhana, she feels, has an old world charm.

“Yes, somewhere there was a risk that people who were not aware of such institutions might feel lost but we thought that that’s where the marketing would come in. Also, like how Fukrey did not mean anything, there was the chance that people would be curious about what it was.”

Then, she adds with a smile, “Plus, I have a fascination towards Urdu.” 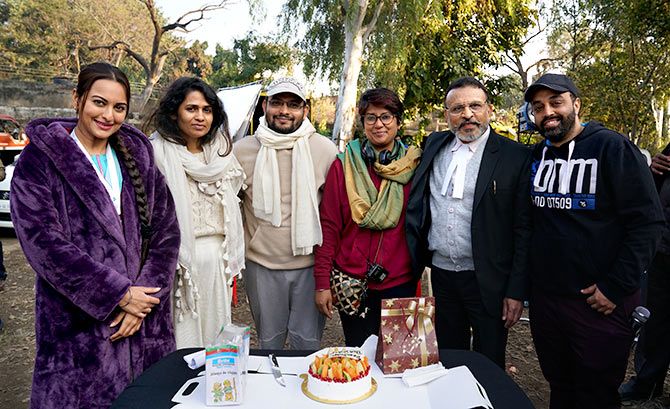 These days, Shilpi has a ‘fascination’ towards her lead actress too.

“Sonakshi is a dream come true,” she exclaims. “She’s a friend now.

“When she heard the synopsis, she was not sure why we came to her because she has always done family films. When she read the script, she realised we were not saying anything offensive.

“There were these long dialogues  -- being my first film, I went all out and attempted a lot of things! -- and I would give her these scenes. I had no expectations but she would always come prepared.

"My writers and I would sit together and they would say, 'Inko do-do panne de do, yeh fatafat kar legi.'” 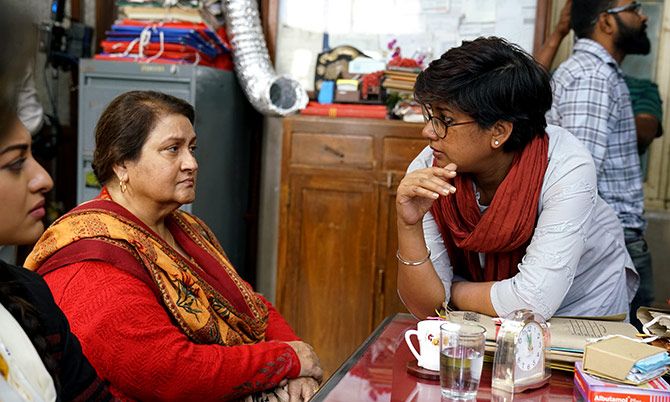 IMAGE: Shilpi with Nadira Babbar on the sets of Khandaani Shafakhana.

The first day on set was fantastic for the young director, as she led her 160-crew team into the cold of Amritsar.

“It’s been a beautiful journey because I’ve had strong pillars around me who did not let me feel the weight of what I was doing -- my producer, cameraperson, production designer, sound, editor... “

How tough is it for a soft-spoken director like her -- she’s so soft, it’s difficult to catch what she says sometimes -- to lead such a big team?

“I’m like this only,” Shilpi says with a laugh. “The key to having peace on set is very good pre-production. If your preparation is sorted, you’re sorted.” 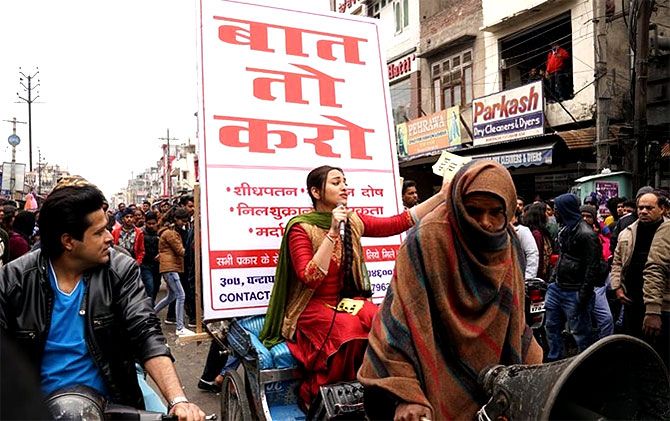 IMAGE: Sonakshi heads out to a live market in Amritsar for a scene in Khandaani Shafakhana.

One of Shilpi’s toughest scenes was when she took the film to a live market in the heart of Amritsar and put Sonakshi bang in the centre of it.

It was Sonakshi’s toughest scene in the film as well because she had to go out with a sex board and market her shafakhana in the open market.

“People realised it was Sonakshi and they came close.

“It was a long street with rickshaws, cars, tempos, people, shops, mannequins, dogs... everything was there! And there was this girl with a megaphone in her hand and a sex board.

“Sonakshi was mighty gutsy to do it. She realised that we couldn’t do it in Bombay, it couldn’t be sanitised -- I mean, it could be if we had the money -- but somewhere we realised we had to take the risk.” 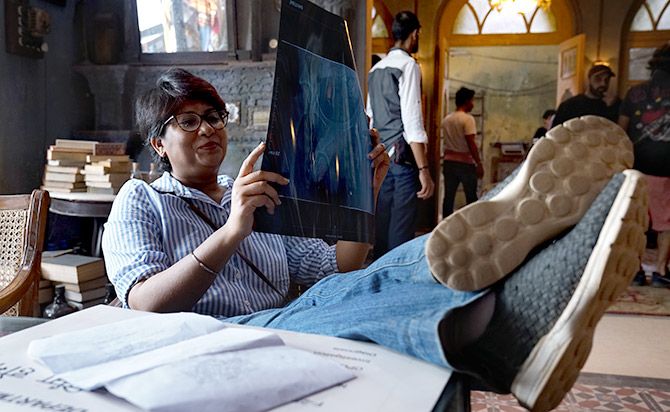 IMAGE: Shilpi on the sets of Khandaani Shafakhana

“I knew of his music and him as a personality but I had no idea he has such a crazy fan following!” she exclaims.

He’s a good rapper but is he a good actor as well?

“He’s an out-and-out performer, and he’s performed in the film. He has always underplayed himself ki mujhe nahin aayega... but the camera loves him and he loves the camera.” 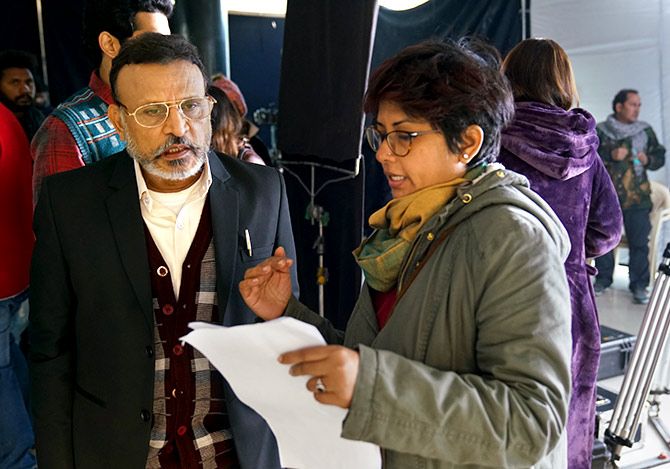 IMAGE: Shilpi with Annu Kapoor on the sets of Khandaani Shafakhana.

Shilpi is currently working out of producer Mahaveer Jain’s offices in Versova, which overlooks the beach and the lovely Mumbai shoreline.

It’s a large, white room with minimal furniture and there’s a saltiness in the air.

As she sips from her cup, Shilpi opens up about herself.

“My mother is from theatre, so we always had that mahol (atmosphere) at home,” she says. “I started directing plays from a young age, so that inclination was always there.”

She left Bhopal for Pune to continue her college education.

Since the Film and Television Institute of India was close to her college, Shilpi’s mother made sure she would visit it often and interact with the students.

“That was a lucky break for me because I saw the making of movies from up close,” she says.

Even as her three-year direction course in FTII stretched to five, thanks to the recurring strikes, the institute helped her land on her feet in Mumbai.

“The student projects are shown to industry people; it’s not exactly a campus placement but it helps them meet the professionals.”

Shilpi’s project, Mangali, got a special mention at National awards in 2003.

“It was overwhelming to get an award from Dr Kalam,” she recalls. 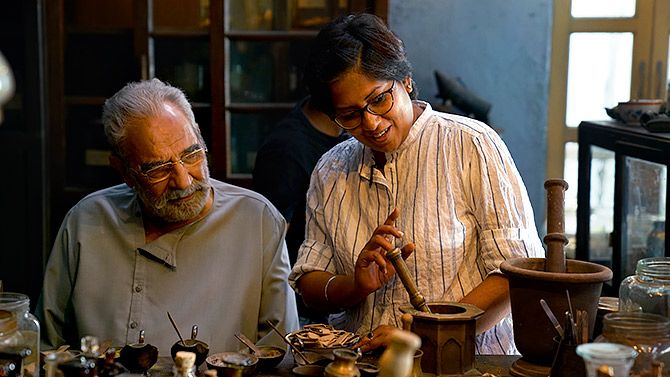 IMAGE: Shilpi with Kulbhushan Kharbanda on the sets of Khandaani Shafakhana.

It was Subhash Ghai who gave her a break in Bollywood.

Shilpi joined his institute, Whistling Woods, as their in-house creative person, when Ghai came up with his film, Black And White.

She joined him as an assistant.

The Black And White team went on to work on his next film as well: Yuvraaj.

“It was a huge experience for me. From a two-actor set-up -- Anil Kapoor and Shefali Shah (in Black And White) -- to bigwigs like Salman Khan, Katrina Kaif, Anil Kapoor, Boman Irani, Mithun...That gave me a perspective of what big commercial Bollywood cinema is,” Shilpi says.

Walky Talky would make commercials, corporate and music videos and it gave Shilpi time to write scripts as well.

One such script became a movie. Almost.

“It was so frustrating. That project took four years of my life. That’s why this film is so special. It’s a much more contained story for a debutante to enter with,” she feels, then adds, “Actually, it wasn’t frustrating. A lot of self-realisation happened at that time.”

Gautam Mehra, a friend who is currently writing the Rajkummar Rao-Janhvi Kapoor film, Rooh Afza, had a story that Shilpi loved.

That story became Khandaani Shafakhana and gave Shilpi a new reason to celebrate. 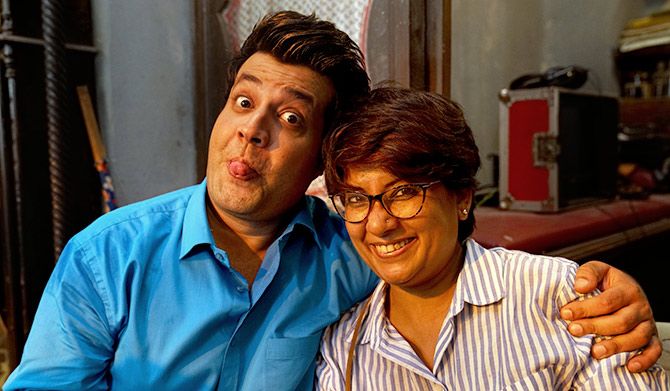 IMAGE: Shilpi with Varun Sharma on the sets of Khandaani Shafakhana.

Khandaani Shafakhana is a light-hearted story that has its share of funny moments.

How tough is it to make people laugh?

“Very!” Shilpi exclaims. “Comedy is an extremely difficult genre. I have great respect for people who are champions of this. 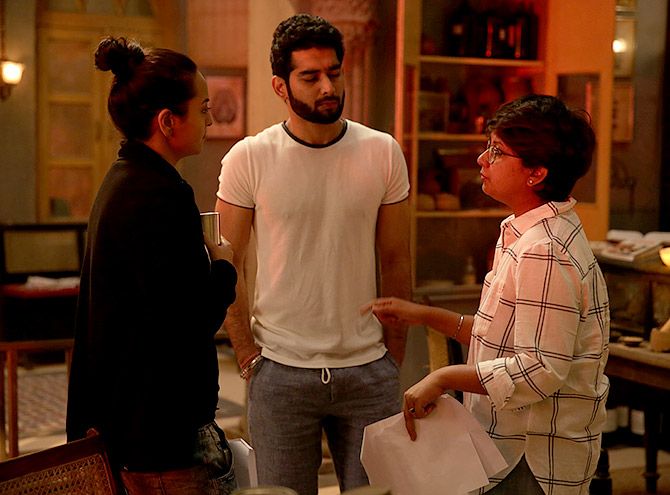 IMAGE: On the sets of Khandaani Shafakhana.

With the release date August 2 looming nearer, how nervous is she?

"There’s a lot of hard work that goes into a film. The baby is out and, now, you’ve given the baby to the marketing and other departments. You have nothing to do with it any more. You’re just sitting there and watching the trade take its course.”

Shilpi, of course, is not “just sitting there”. Besides dealing with the last-minute details, she's currently busy with the film's subtitling.

She’s looking forward to a ‘two-month-break’ that she hopes to take after Kandaani Shafakhana releases.

But what Shilpi Dasgupta is really, really looking forward to telling many more good stories. 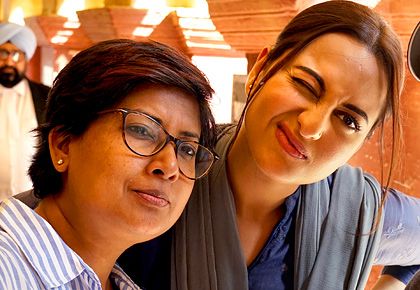