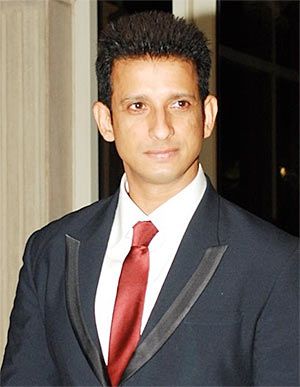 'My recent films didn’t do well but that’s a part of the game. I don't have any complaints. I feel sad and dejected, but you have to get moving,' Sharman Joshi tells Sonil Dedhia.

Sharman Joshi's last two films, Gang Of Ghosts and War Chhod Na Yaar, may not have worked but the actor is terribly excited.

It's not often that one gets to work with the gorgeous Rekha.

Sharman is a part of Rekha's upcoming film Super Nani, and he's really looking forward to it. It will release on October 31.

In conversation with Sonil Dedhia, Sharman tells us why he thinks Rekha is the ultimate diva.

Tell us about Super Nani.

The film is an adaption of a Gujarati play to which Induji (director Indra Kumar) had bought the rights many years ago.

I readily agreed to be in the film. The film is a family drama yet it is edgy and novel.

The film is progressive in its thinking and at the same time, retains certain Indian traditional values.

Is the film similar to the play or have there been changes?

The film is quite different from the play. Theatre has its own limitations in terms of the canvas. With films, you can adapt something and take it to another level.

The soul remains the same but Induji has brought in a lot of changes.

Super Nani is narrated in Indra Kumar style so it’s an entertaining masala and a paisa vasool film.

As someone who also does theatre, how do you look at a film like Super Nani which is an adaptation of a play?

I have been a part of films like Golmaal and 3 Idiots, which were adapted from a play or book.

I am a huge fan of Induji’s work and have a lot of respect for him. He is one of the few directors who has made films in various genres and has been consistently successful. He has a good script sense. I am happy being a part of this film.

Several scenes had to be shot again. Did that frustrate you?

Indra Kumar is a maverick. He is the coolest director on the block. We talk about the new directors arranging focus group screenings in which they show their film to a select audience before it releases, ask for feedback and change certain things if needed.

Induji has been doing this for years.

You need a lot of guts to show the film to an audience, take the criticism and use that criticism to your advantage, re-plan and spend more money and time to re-shoot certain portions of the film.

There is a lot of headache in doing it. Hollywood has been doing it for years.

Indra Kumar is also known for his sex comedies. Would you act in such films?

No, I won’t be comfortable doing sex comedies. It’s not my zone.

I enjoy watching sex comedies like Induji’s Grand Masti and others but I can’t do it as an actor.

I am scared to do them because personally I am very boring.

You are acting with Rekha in Super Nani. What has that experience been like?

It was a wonderful experience to work with Rekhaji. The discipline that she follows in taking care of herself is so evident.

At this age she looks breathtakingly gorgeous. She is the ultimate diva.

I really enjoyed working with her. She is very easy to work with.

I was in love with her as a young boy. I loved her in films like Khoobsurat, Muqaddar Ka Sikander and many others.

Randhir Kapoor is also in the film.

Yes, Randhirji and Rekhaji had done a lot of films together in the past and it was a delight to work with these legends.

He was a live wire on the sets. He kept the mood jovial and happy.

It was a treat the camaraderie between Randhirji and Rekhaji. In a recent interview, you mentioned that you aren’t getting many scripts to consider.

Did I say that? But now I am getting scripts (winks).

So why did you make that statement? You have had continuous releases, irrespective of your films doing well or not.

My recent films didn’t do well but that’s a part of the game.

I don't have any complaints. I can’t expect every film will do well. I feel sad and dejected, but you have to get moving.

My last two films (Gang of Ghosts and War Chhod Na Yaar) were failures. I think I learnt a lot more from the failures than the success of Ferrari Ki Saawari.

You have returned to theatre with Raju Raja Ram Aur Main.

For 10 years I didn’t do theatre; it was a conscious decision on my part.

I was tired of it because it takes a lot of time and energy and it was too intense and I genuinely needed a break.

Theatre performances take the life out of you. Also, I was getting a lot of film offers.

Now when I have started doing theatre again, the thrill and excitement that I was looking for, I’ve got. It’s an exciting time for me.

I will start doing theatre on a regular basis because as an actor it’s more like a holiday for me. I get more satisfaction being on a stage.

I have reinvented myself as an actor.

What do you think about the theatre scenario in India?

Raju Raja Ram Aur Main is a Hindi play, which was earlier performed in Marathi and was called Sahi Re Sahi. It’s a masterpiece and director Kedar Shinde is just amazing with his work.

To be honest, we Indians don’t give credit to ourselves or else Kedar’s name would have been among the top theatre directors.

Why do Western countries do such a good job? It is because their presentation is fabulous.

They have a bigger canvas. If we had the money for it, I think we could do a better job too.

Any films that you recently watched and liked?

I saw Khoobsurat, Bang Bang and Haider and I liked all of them.