'Ek Hasina Thi is the best movie of its kind. Similarly, Omkara and Hum Tum. But after that, what do you do?' 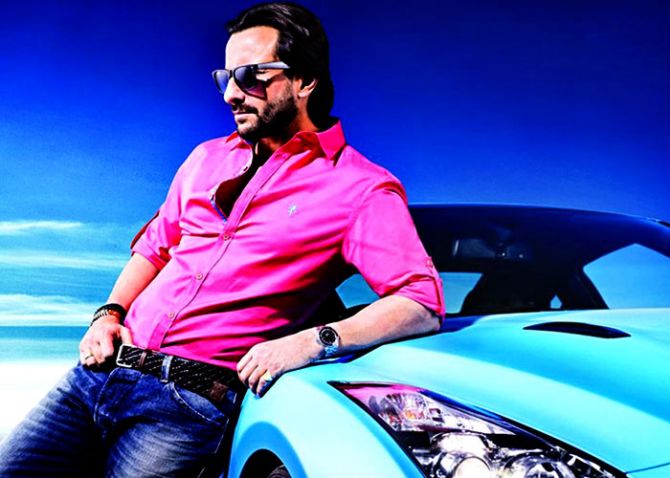 It's a Sunday, and Saif Ali Khan is in the mood for an interview.

Dressed in a black t-shirt and orange shorts, Saif walks in with his shades on. He wears Kolhapuri chappals and has a leg brace on his right foot.

"I strained it doing some action. It's just a torn ligament," he explains.

He asks the office boy for a cup of coffee and some breakfast (unfortunately, he never gets that breakfast!)

Saif plays a chef in his upcoming film, Chef.

"Everyone should know how to cook a little bit," he says.

What's his favourite childhood food memory? "Eating French fries in bed while watching movies on my VCR in Delhi," he says.

He used to crave for homemade dal chawal when he was in a boarding school in England. "I also like bhindi. I still like these three things," he says.

Saif takes his time to answer the questions, but leaves nothing unanswered -- from his movies to his daughter Sara's big Bollywood debut. Jahnavi Patel/ Rediff.com listens in.

Has the definition of food changed after signing Chef?

No. I have always understood the importance of food. That's one of the things I liked about the story.

I think the understanding of what a chef does has changed, the respect for the high pressure kind of a job and how difficult it is to cater to what people want.

People want to eat well and it takes a lot to make a good meal.

Even set workers in film units don't mind working hard, actors also, but they want to be well fed.

The mark of a good production is good food.

I have always loved food and cooking.

How particular are you about your food?

I am quite particular.

I normally eat home-cooked food, which is light and healthy. I don't like rich food.

But I went to boarding school so I can eat bad food. 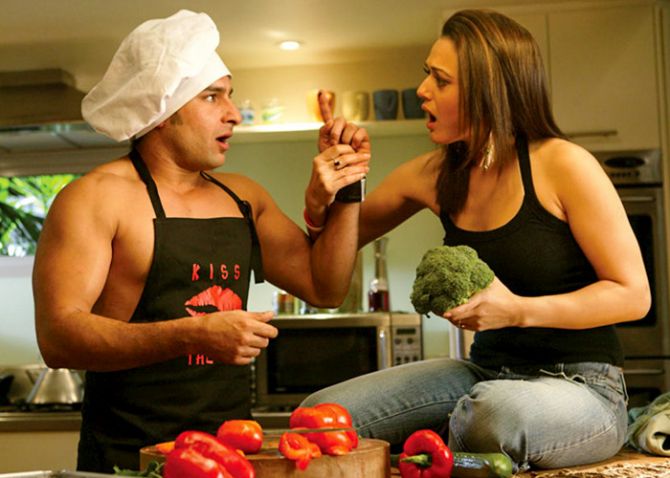 You played a chef in Salaam Namaste too. How different was it this time around?

This is a completely different kind of a film.

I think my approach has become deeper over the years. Once you grow up a little bit, you understand more about life. It shows on your face.

Raja (Krishna Menon, director) said that I shouldn't be too thin or too fit in Chef. He says, 'Don't trust a thin chef.' But I don't know if it's true because I have met Vikas Khanna and Sanjeev Kapoor, they're all fit.

It depends on what kind of chef you want to portray.

My guy is quite lazy. I don't see him exercising or running. I see him just standing around in shorts and t-shirts, relaxing, when he is not working hard.

I don't see my character as very health-conscious, sadly.

How easy was it to relate to this film because at the core, it is a father-son story?

You do understand more, when you deal with children. The important thing is that you don't overdo it.

If you have children, you talk to them normally like adults. You can also get irritated sometimes.

But if you're pretending then you try and be too nice I think.

That understanding came naturally because I am a father.

I mean, mothers in the movies have this image of being too kind. Most people are not too kind to their children in real life. How often do you cook for your kids?

I am not sure they like it very much but they eat it.

Ibrahim still eats spaghetti but I think Sara is off carbs for the time being.

I like cooking; it's very therapeutic, relaxing. It's a beautiful thing to be able to do. You feel self sufficient.

My cook looks at me like he is worried about his job but he doesn't have to worry. 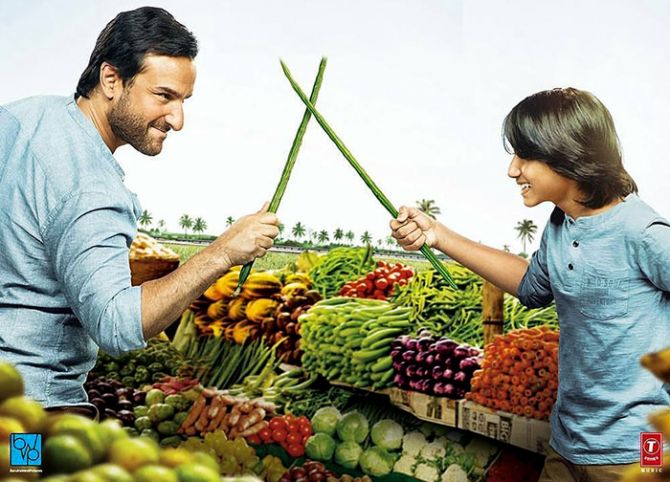 Chef is an adaption from the original Hollywood film. Has the relation between the father and son changed in this Indian adaption?

The film is different enough.

I don't think of the original anymore; I don't even remember it.

I don't know why I saw the original film because normally, I wouldn't see it in connection to this film. They are all different.

Raja has adapted it and we have worked on it with Ritesh (Shah, writer). We have changed the look and given it a journey from Kochin to North India. We made it like north and south Indians not really understanding each other's culture.

I am sure if Jon Favreau (who directed the Hollywood film) sees it, he will respect the differences. Do you think people will still compare it to the original?

Yes, and they should. I hope they will appreciate the differences.

Sometimes, in Bollywood, when people do a remake, they do it badly. I don't think people will feel that here.

I'm meeting young actors, who I wouldn't have met before in the mainstream world. That's nice.

The standard of acting is improving, it is becoming more natural.

There's an ease of making films because the digital medium. Even for the mainstream movies, you don't need a big set-up now.

Apart from that, I don't think anything will really change. It's like Hollywood in many ways.

How have you changed?

I think I am getting better.

I think I am more in sync with all the elements that go into making a film.

Earlier, I was very edgy and impatient. It's hard to say when the turning point was, it happened slowly over the years.

Now, every time I am on set, I want the director to be happy.

It's a director's medium. You should put your own feelings or ego aside and do what they want for those 12 hours. It's easier that way. 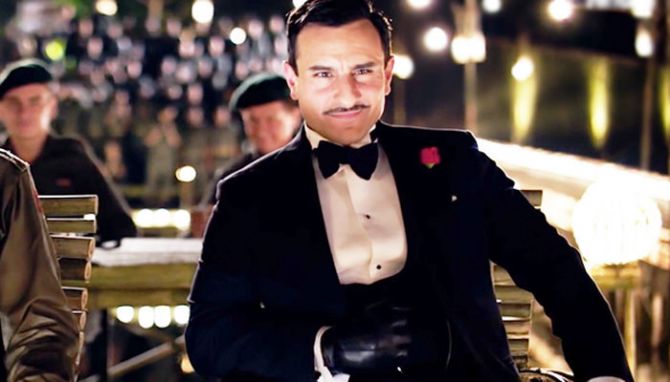 Does box office failure affect you? Do you regret doing any movies?

Sometimes you get upset because you feel you could have made a better film.

People had high expectations from Rangoon.

I don't know what to say.

Rangoon was a cinematic experience for me, so I don't regret it. I loved it.

This is what I think an actor is. He should be getting a chance to be Russi Billimoria with one hand gone, smoking a cigar, and doing a great scene for Vishal (Bhardwaj, director). It was a lovely experience.

I'd love to work with Vishal again.

I think you would feel really bad if you tried to make a hit, put in all the elements you think are commercial, and it still goes wrong. Most of the time, if the movie doesn't run, something is wrong with it.

Is it fair to blame the director for a film's failure?

I think it's pretty fair. Who else do you blame? (laughs)

But everybody gets the flak. The actors get it as well because he does choose (to do the film). It's the films that we green light that make us.

A nice mix is usually a good idea -- someone like what my mother (Sharmila Tagore) did. She did a nice mix of Bengali cinema, artistic cinema and commercial cinema.

So I'd like to do a Kaalakaandi, Being Cyrus, Race as well as Chef.

I don't think you should be known by one type only.

It's a director's medium, we let them call all the shots, so it's our fault as much as somebody else's for getting involved.

Ideally, a good life is to do a film, work hard and go on a holiday. Then, it's family time.

We do go somewhere, even Pataudi, just cut off for a little bit.

One film and a nice break, I have always done that. IMAGE: Off on a family holiday with Tainur and Kareena. Photograph: Pradeep Bandekar

Women are getting better roles in the movies now but yet, there is a pay disparity. Do you see that changing?

I hope so. Then I can stay home.

I think it's a reflection of what happens at the box office. If films start running, as some people's do, then they get paid a certain amount.

It's quite fair, it's a free market, there's no control on that. There's no rule that women won't get paid as much as men. Some women do get paid more than some men.

I am all for equality, obviously.

Recently, there were reports that your daughter Sara was reporting late on sets.

I heard that too but then, I heard the producer gave out a statement that she's acting really well and that was all rubbish.

Some mixed up reviews always come out from the sets.

But it's nice to be discussed.

I won't believe it if I heard that Sara was making trouble because she is helpful, constructive and very focused. She is very passionate and hardworking.

I will not believe that she will behave badly.

What advice have you given her?

Yeah, so many. The main thing is to just try and bring out your uniqueness. There's a galaxy of stars, so we're supposed to be one of many. What makes us unique is who we are.

So just concentrate on being a good actor. Was your mother as involved in your first film as you are in Sara's?

The makers she knew were like Shakti Samanta, who were not making films when I joined.

She had worked with Yash Chopra.

Yes, and Yashji probably gave me my first film because of her. So we're back at nepotism (laughs). Kya kare? Can you tell us something about your character in Bazaar?

I play a Gujarati businessman.

It was very challenging; there were a lot of long lines to learn but I enjoyed that.

It's a very strong character. I like that kind of cinema also.

The character is dark, strong and a bit mean as well.

There have been talks about Go Goa Gone 2.

There is always talks about Go Goa Gone 2, but we need good directors.

Things are difficult to finalise... Everybody wants to get paid too much (laughs), so these things become difficult.

Why have you taken a break from producing films?

I wasn't enjoying the feeling I was getting as a producer. I first need to solidify my ground as an actor and my relationships with people in the industry and then concentrate on production. I think it is a mix. Films like Hum Tum, Parineeta have been nice; they were quite heroic.

Race is quite heroic. They wanted me to play the younger brother (Rajeev Singh, which was eventually played by Akshaye Khanna) but I said let me try and play the older one. He's more sorted and is a moral compass.

I get bored playing the same thing.

How tough is it to repeat success and choose your projects?

Up until now, it felt that you come across are many ceilings in your career.

I think Ek Hasina Thi is the best movie of its kind. Similarly, Omkara and Hum Tum. But after that, what do you do?