'I do drama with the same intensity as any comedy.' 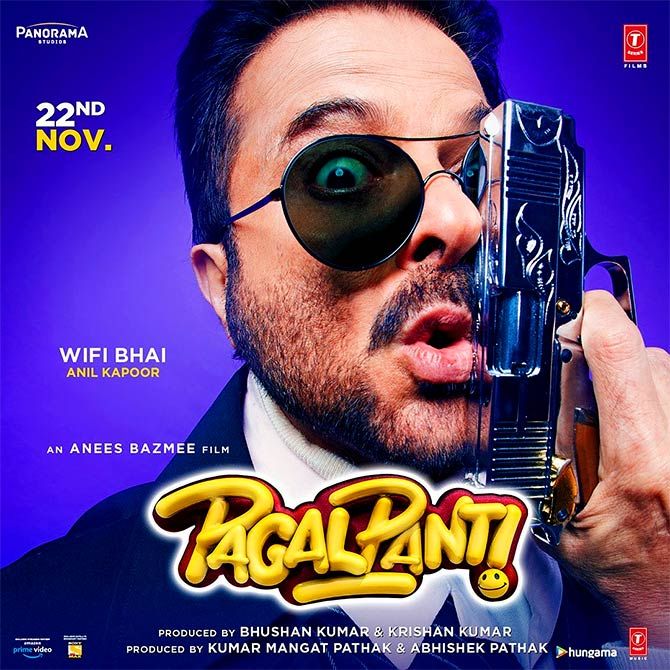 No one can pull off multi-starrer comedies like Anees Bazmee.

He has quite a few rib-tickling ones to his credit, like No Entry, Welcome and Ready.

John told us in an interview that Pagalpanti is a film that cannot be critiqued, Anil Kapoor maintains it is not a mindless comedy.

"We pray that this film should survive even with a little bit of bad-mouthing," he tells Rediff.com Contributor Mohnish Singh.

Co-star Urvashi Rautela and Director Anees Bazmee join Anil for the interview, and reveal what they think as well.

Do you enjoy the comedy genre the most?

Anil Kapoor: See, it is not the question of what I enjoy and what I don't.

Whenever there is a film pitched to me as an actor, I assess it on the basis of my role, the script, the director, the producer and the co-stars.

Then comes the dates, the money and the studio.

There are so many things that make a film happen, you know. So, it depends on what is offered to you.

Like, when I was doing Total Dhamaal, I was also doing Ek Ladki Ko Dekha Toh Aisa Laga.

Both films were completely opposite to each other.

In Total Dhamaal, Madhuri and I play a lower middle-class Gujarati couple.

In Ek Ladki Ko Dekha Toh Aisa Laga, I played a character from Moga. He is a tycoon who is in the fabric business and a mama's boy. He has a daughter. So it was a completely different character.

Along with this film, I was doing Malang, which is completely its opposite.

In Pagalpanti, I have designed and written my own backstory, which is that my brother-in-law Saurabh Shukla and I used to make jalebis. Eventually, they become the dons of Malad (north west Mumbai).

After Malad, they progressed a bit and went to London.

In London, they are dons and do business with the underworld.

So I enjoy every genre.

All my films -- from Woh Saat Din until now -- I have done all kinds of genres like drama, action, comedy, or out-and-out comedy.

Sometimes it is completely out of the box like Virasat.

The audience loved your naughtiness in films like Jamai Raja.

Anil Kapoor: I feel they love it because I give them gaps.

When you give a gap and then make a comeback, it feels fresh.

The role I am doing in Pagalpanti, I had done this many years ago and now I am doing it again.

People tell me that audiences like you in this type of role, so you should do more of them and you will earn more and become a bigger star.

But for longevity, I should not do the same thing, otherwise people will get bored. 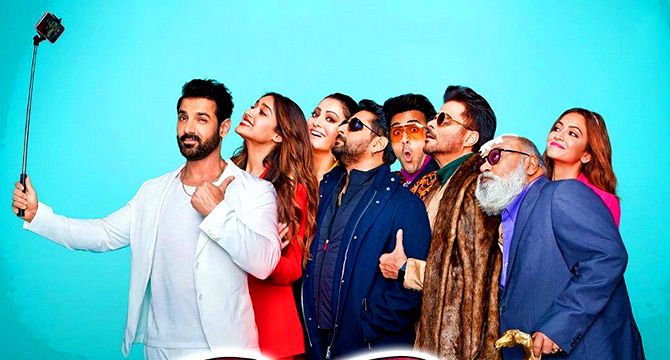 IMAGE: A scene from Pagalpanti.

Is it disheartening when a well-meaning film like Ek Ladki Ko Dekha Toh Aisa Laga in which you really worked hard, does not do well commercially?

Anil Kapoor: It is disheartening when people do not like a film.

Whoever saw it liked it very much.

When you do a film that is watched by a lot of people but they do not like it, that is disheartening.

Sometimes, people watch a film and bad mouth it.

At times, these films work in your favour too.

We pray that this film (Pagalpanti) survives even with a little bit of bad mouthing.

When Parinda released, people used to say that it did not work anywhere except in Bombay. Thirty years later, people still remember that film.

Ek Ladki Ko Dekha Toh Aisa Laga is the first of its kind where a romantic relationship between two lesbians is shown in a commercial film.

We had the courage, especially Sonam Kapoor, to do it. It was gutsy.

Your characters tend to have a light-hearted touch. Is that your contribution or the producers's demand?

Anil Kapoor: It is not necessary. There are certain films where there is no humour at all.

I feel I get attracted towards characters who don't take themselves very seriously.

Life is short. Am I right or wrong?

You have one life. If you put humour in everything, it will make people happier.

I want to make people happy.

Over the years, audiences not only remember your films, but also the characters you have played. How do you take that?

Anil Kapoor: I feel very nice when people address me by my character's name in the crowd.

People call me Mr India, sometimes they call me Lakhan or Munna or Majnu bhai.

Kartar Singh's role in Mubarakan also became quite popular. I had played a Sardar for the first time.

In 24, Jai Singh Rathod got appreciated. My character was the head of the anti-terrorist unit. His life was torn between his family and the country. It was a very serious character and I enjoyed it.

In Pagalpanti, I play Wi-Fibhai. 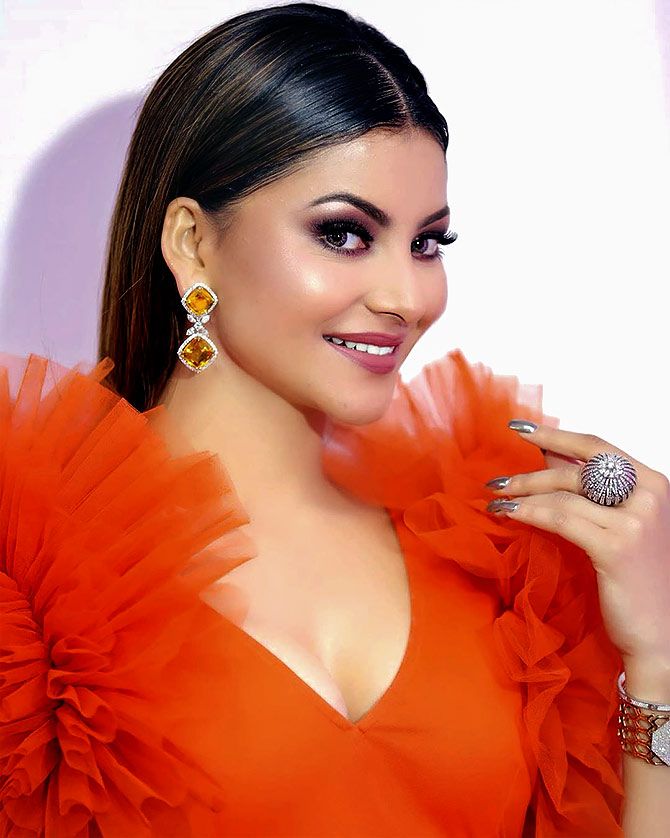 Your pictures from the London schedule of Pagalpanti prove that you guys had a great time. Could you share some moments?

Urvashi Rautela: We used to shoot for hours and sometimes, someone would skip workouts because of tiredness.

But Anil Kapoor sir would be at the gym, cycling with his trainer at sharp 6 am.

He would finish his workout and look the freshest among us.

He would come to the sets on time.

Without him, the sets would be dead. When he was present, everyone would be happy.

Everybody would feel energised, like we had this jhakaas feeling.

Urvashi, you have been in the limelight mostly because of your item songs. Does that help your acting career?

Urvashi Rautela: Definitely. I still remember we were going somewhere and Anil Kapoor was at the airport. He appreciated my song Sara Zamana from Kaabil.

He has always been very motivating, not only towards me, but towards everybody.

It is always great when you get this super-duper hit song and then people give you a film.

How difficult is it to do mindless comedy with conviction?

I have never done any mindless comedy; I never think of my films as mindless.

I do drama with the same intensity as any comedy.

I do it very seriously and the situation is such that makes you laugh.

There is a lot of hard work to make it look funny.

It is not necessary for you to laugh out loud at every scene, but a certain kind of a smile is always there.

If you see Laurel and Hardy or Charlie Chaplin, few shows were slapstick, a few were funny, a few were mindless... but a lot of hard work was behind them. 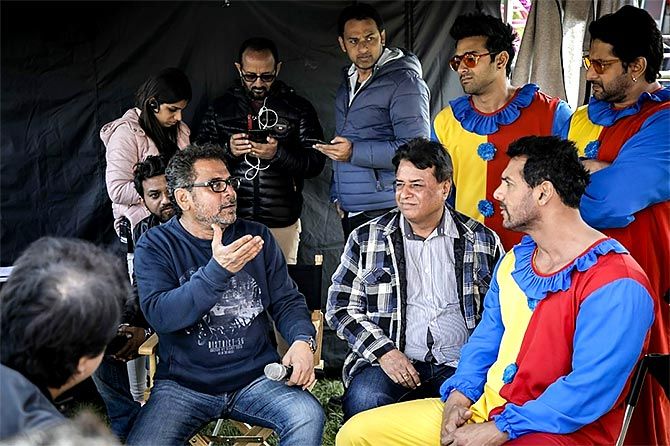 How excited are you about Pagalpanti?

Anees Bazmee: Expectations are a very good thing. In fact, I will feel bad if no one expects anything from us.

We feel we have made a good film.

After doing everything, we wait for the release date.

This is a 100 marks exam, where at times you can also get 200 marks. This is not possible in any other exam.

I hope the audiences love the film.

However, no matter what kind of fate the film meets, I would like to say that it was a great journey.

After many years when we look back at it -- the whole process, the people, the fun and frolic that we had -- it will remain with us as unforgettable memories.

The title of the film is unique. How did you think of it?

Anees Bazmee: When I started writing, there was a little bit of madness and then it became a bit more.

The bright side is that Pagalpanti does not reveal the story.

There are many films which have great titles, but the story gets revealed. Like Main Badla Loonga, now everybody knows what the film will be about.

There are many films which have catchy titles, but the story is not revealed.

For example, No Entry or Welcome, you don't get the slightest hint of the story.

In the same way, I think Pagalpanti is a great title. 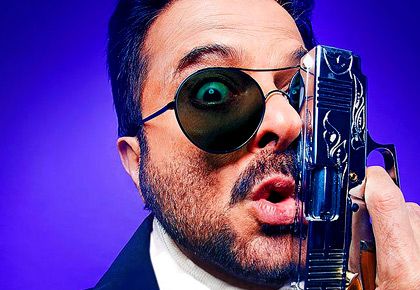