'If you listen to the title track of Judgementall Hai Kya, you will find some crazy things happening in it -- from crazy laughter to as if someone is inside your mind.' Composer and singer Rachita Arora first broke onto the music scene in 2017 with the release of Anurag Kashyap's sports drama Mukkabaaz.

"Although I am not comfortable doing just one song in a film, it's okay because that is how people are going forward," Rachita tells Rediff.com Contributor Mohnish Singh.

How did your musical journey begin?

I started when I was in Standard 9.

There was an inter-school competition and my music teacher asked me to sing for it.

I got the first prize out of some 27 schools.

It was then that my parents thought I could sing.

One day, my principal came home and told my parents to encourage me to make a career in music. It started from there.

I learnt Hindustani classical from my guruji and started making music for theatres in Delhi.

Then I came to Mumbai to learn more.

One day, I happened to meet Makarand Deshpande sir. He asked me to compose music for one of his shows.

I composed something on the spot and he loved it so much that he immediately messaged Anurag Kashyap sir and said he must meet me.

So I had a meeting with Anurag sir and he loved my work. That's how I got my first film, Mukkabaaz. 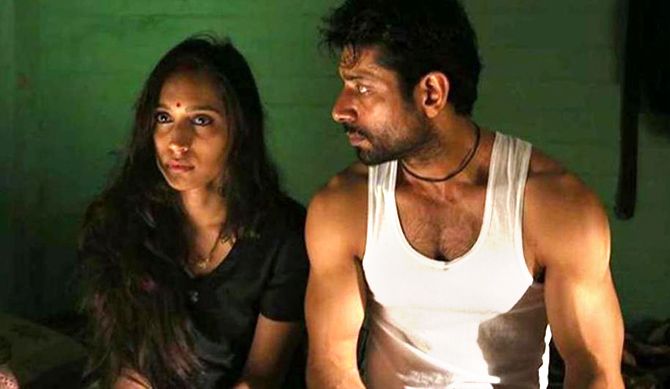 IMAGE: A scene from Mukkabaaz.

Anurag Kashyap's movies are usually dark and edgy. Did that make composing suitable music difficult for you?

As a composer, I do not stick to a genre.

If you want me to create a love song or jazz or anything, I can make that too.

After Mukkabaaz, he gave me Sacred Games, where I composed a disco song.

He has faith in me that I can compose music for any genre, and that's why he gives me varied songs.

Anurag sir has an amazing eye to understand how good an artist is and where he or she stands.

I am doing another film with him now.

Although it is not that dark, it has his touch.

How does it feel when a film-maker like Anurag Kashyap shows faith in a newcomer like you?

He trusted me enough to give me the entire album of Mukkabaaz.

By the way, he trusts everyone who he works with, be it writers or musicians.

Whosoever works with him for the first time will never feel that he or she is working in a new environment. He trusts you so much.

He gives you so much space that you will never feel scared.

Tell us how you got Newton.

Aanand L Raiji had heard my music in Mukkabaz and he really appreciated it.

He asked me to do the background score for Shubh Mangal Saavdhan and then Newton happened.

Aanand sir had asked me to compose two songs for the film, one of them was with Raghubir Yadavji.

I loved singing that song with Raghubirji (Chal Tu Apna Kaam Kar). It was a completely different experience for me as a musician.

Newton was really a beautiful film. How did you bag Judgementall Hai Kya?

Kanika Dhillon, the writer of the film, heard my music and liked it. She told (director) Prakash (Kovelamudi) sir -- he is her husband -- to check out my stuff.

She asked me to meet him.

So I met him and he really liked the songs I had in the bank.

He asked me to compose the title track and then this retro song called Para Para.

I have two songs in the film and one version of the title track in hard rock.

How do you look at the trend of having multiple composers in a single film?

Frankly, we need to understand why old songs are evergreen.

There used to be one movie and it had an emotion going from the start to the end.

Giving colours to that film by one person actually held the mood.

Now giving colours to it from different composers is like changing the whole mood and feel.

Sometimes you feel this is not required in the film.

The texture of the film is so different, but suddenly a song comes in.

So a song which is different from another song may or may not go with the mood of the film, and this can get annoying.

Once I met an experienced mixing engineer at Yash Raj Films, who told me that earlier, composers would take two-three months on one project.

They used to get into the zone of the film.

Yesteryear composers used to create music keeping characters in mind and they used to take their own time.

That's why their songs are evergreen.

These days, they have promotional songs, this and that.

But it's okay, times are changing. Everybody has a different way to look at it. Is it difficult for you to adapt to this change?

Not that much. For example, there is a song in Newton by another composer.

It's a very beautiful song. I really liked it.

Having multiple composers depends on the director -- how he talks to his artists and how much he is involved in the process of creating music.

Even in Judgementall Hai Kya, when I did the title song, Prakash sir loved it because that was what he was looking for.

It's something in trance because Judgementall Hai Kya is a crazy world created by Kangana Ranaut.

That craziness has to come through in its music as well.

Although I am not comfortable doing just one song in a film, it's okay because that is how people are going forward.

Do you agree with the recreation of old classic songs?

It is disappointing that every second song is a recreated version of some old song these days.

This is the time to get the melody back.

Now is the time to create original compositions.

Earlier, composers used to put so much effort into one song.

First, they would work on the composition and then have sittings with arrangers. They would tell them that this is the interlude, this is the prelude...

An old song is great because it had an intro... If you sing any old song, you can sing its interludes as well.

People recreate old songs because they are still melodious to our ears.

Yesteryear composers gave a lot of time to songs. Now, we are very fast.

We are rushing into things, which is not good.

Have you ever been approached by a film-maker to recreate a song?

It will be good if I try to compose something original.

Before composing a song, do you ever meet actors on whom it will be picturised?

If I know which actor will be a part of the movie, it will be easy for me to choose the vocal and understand the tonality of the movie.

For Judgementall Hai Kya, Prakash sir told me that Kangana Ranaut is the female lead.

I know how crazy she is with her acting.

I was very excited to know the requirements of the script.

So if you listen to the title track, you will find some crazy things happening in it -- from crazy laughter to as if someone is inside your mind.

I have also used a kid's voice to add a little hunting feel to it.

Who is your favourite singer?

Kishoreda and Mohammad Rafisaab are my all-time favourite.

I also like SD-da's (Burman) voice; it had a very beautiful texture.

Who are your favourite composers?

RD Burmanji is my all-time favourite.

I love A R Rahman for the kind of songs he has made.

If I ask you to name the one person who has changed your life, who would you name?

There are three people besides, of course, my parents.

First and foremost, my Guruji Pandit Baldevraj Varmaji. He changed my life musically.

Then, Makarand sir. He has such a big and open heart.

The next day after I met him, he started giving me so many phone numbers.

I asked him what I should do with these numbers. He looked at me and then, he messaged Anurag sir.

Thanks to Anurag sir, who agreed to meet me in the first go.

Makarand sir and Anurag sir are like my mentors.

They fight for me.

They ask me about my work, if I'm stuck with something, if I need help. 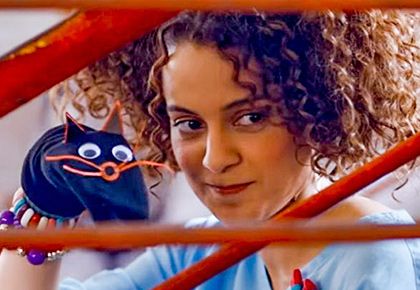