The usually sleepy lane outside Mumbai's Aurora theatre has woken up to Rajnikanth's latest film Kabali, and the Thalaivar's fans are celebrating ecstatically! 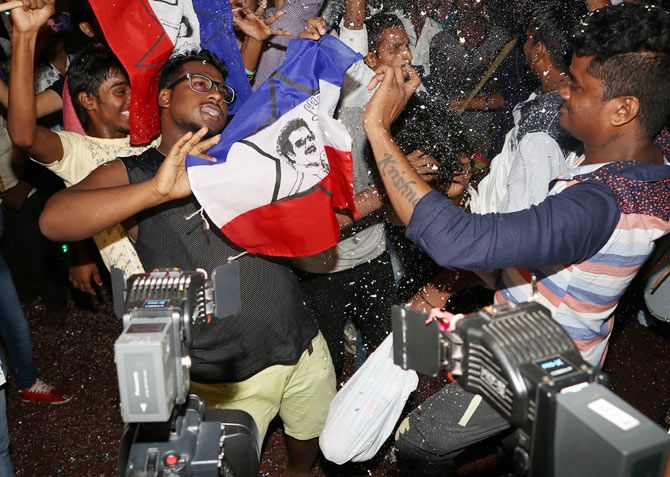 The first show is scheduled for as early as 6 am, but the fans have arrived hours ahead.

Aurora Theatre, located in Mumbai's central suburb Matunga, has kept up a 26-year-old tradition of having grand celebrations on the first day of a Rajinikanth release. 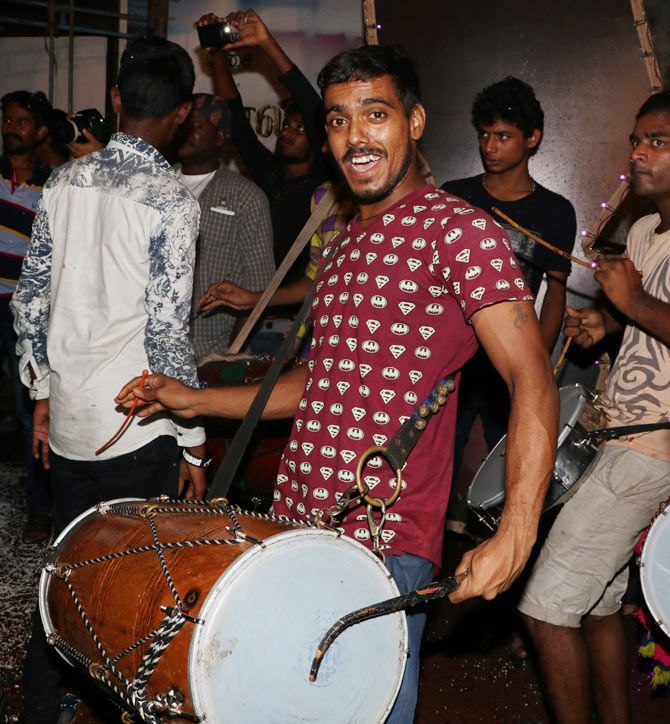 A giant cut-out of the Superstar takes centrestage, some people play the dhol and fans dance around like there's no tomorrow!

The fans were requested not to waste milk, but the ritual simply *has* to be done.

But unlike the previous occasions, the milk isn't poured down the huge cut-outs, instead, the fans chose a regular-sized standee this time. 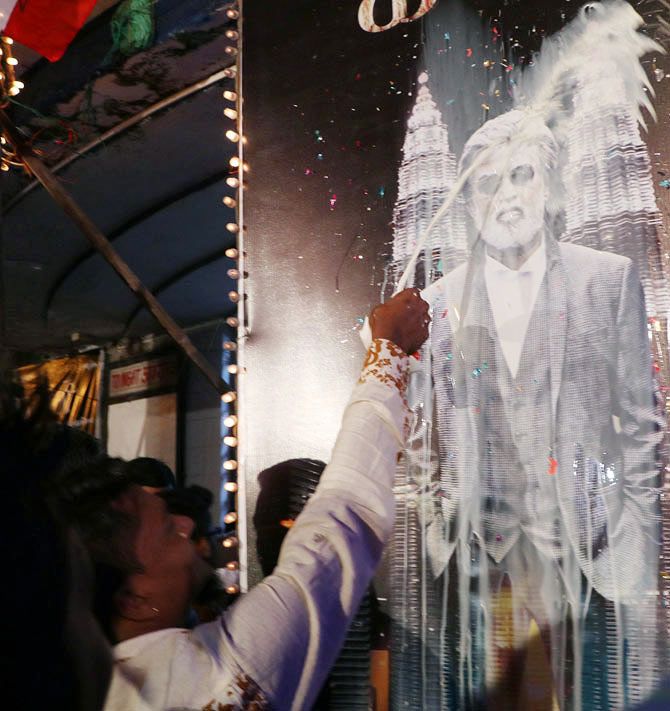 So who are these die-hard Rajinikanth fans?

Chintan Thakkar is accompanied by three friends, and they have all taken a day off from work to watch the first show of Kabali.

It wasn't easy for them to procure the tickets. It took a lot of convincing and following-up with an association member before they finally landed the magical tickets. 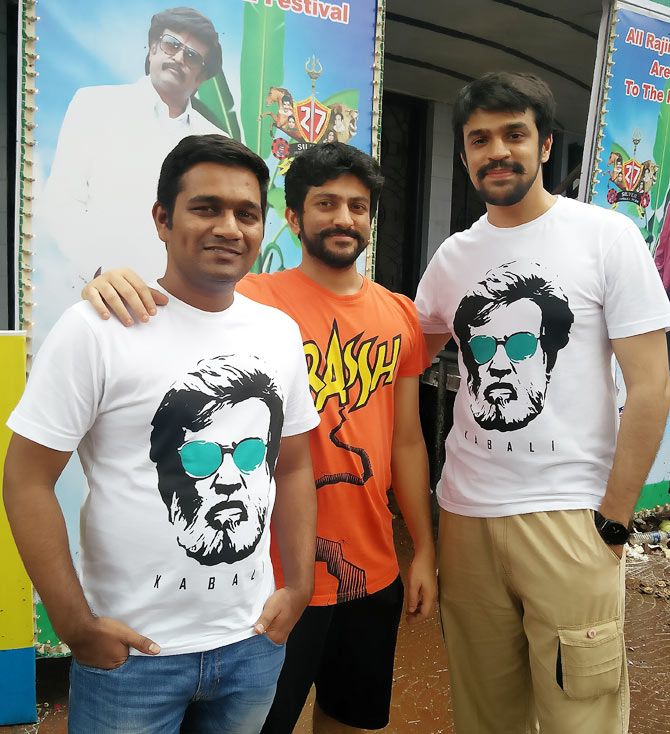 "We are non-Tamilians -- I am a Gujarati but am still a die-hard Rajinikanth fan. It is a different movie watching experience at Aurora Theatre because it is more than just watching a movie. We are very excited to see him on screen," Chintan gushes.

"We will not be able to hear the dialogues inside because people are just going to shout but it's going to be fun," he says with a laugh.

Chirag, like many others, feels Rajinikanth is the God of Indian cinema.

"If Hollywood has Arnold Schwarzenegger and Sylvester Stallone, India has Shivaji Rao Gaikwad or Rajinikanth. We are proud to have him. He is very simple and doesn't bother about his appearance unlike other stars," he says. 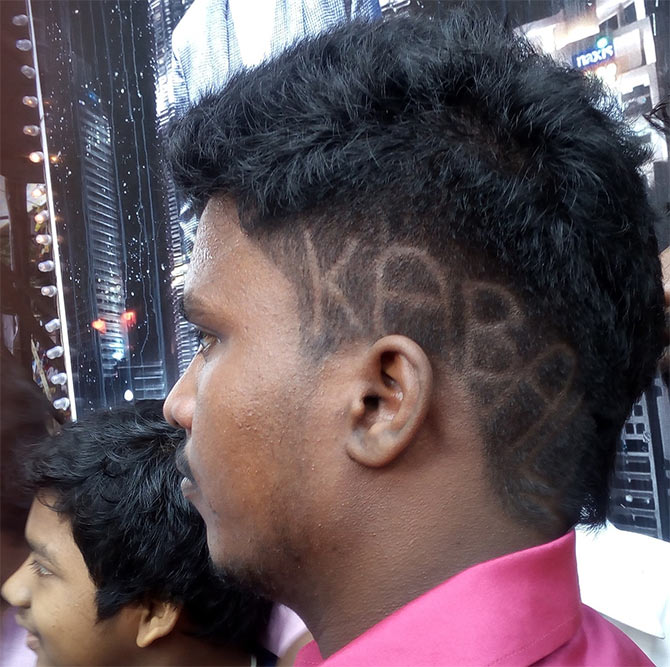 Nadan and his friend M Swamy hail from Pondicherry, and are currently residing in Shirdi. They have been waiting outside the theatre since 3 am!

"Rajinikanth is God to me," Nadan said. "He is a great person."

"I can give my life for Rajinikanth," said M Swamy. "He is a chief minister without standing in any election. Nobody can say anything against him. Twelve crore people in Tamil Nadu will give their lives for him." 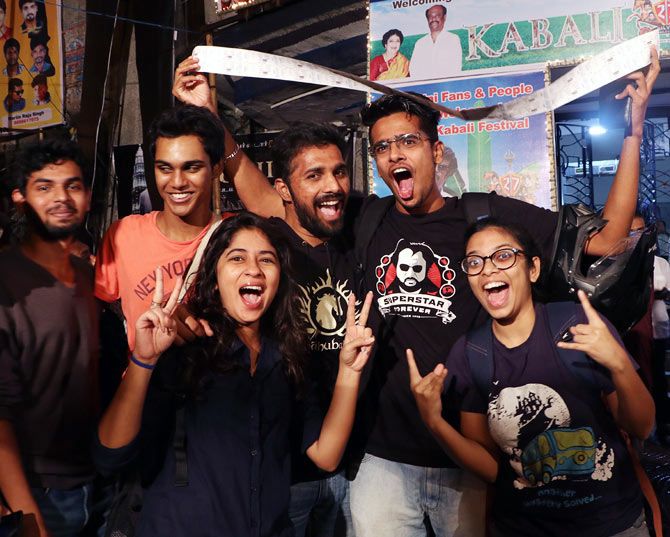 Chennai-based Sashidharan has watched all Rajinikanth movies first day, first show. This is his first time in Mumbai and he didn't imagine the release to be as big here as it is in his hometown.

"I thought it wouldn't be much here, but it's actually much more than what I have seen in Chennai," he says.

Naman Ramachandrana, who has written Rajinikanth's biography, flew down from London to make sure he would rejoice with the fans.

Does the failure of a Rajinikanth movie disappoint him? "I see each film at least five times in the theatres. It hurts me when his films don't do as well as they should but there's no danger with that for Kabali. I think it will at least make Rs 500 crore!" 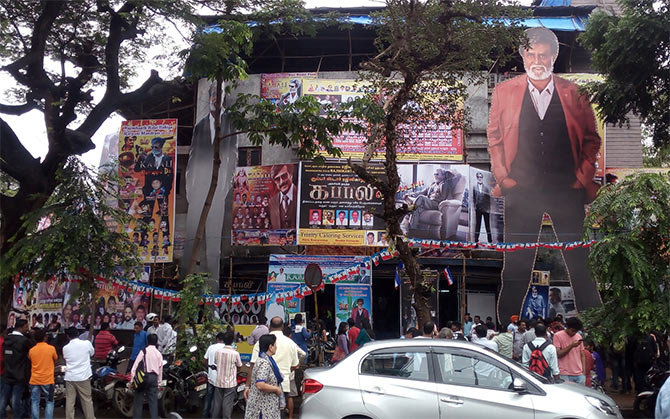 "I wanted to watch the first show of Kabali, we are that mad (for Rajinikanth)," says Mariamma, adding that it wasn't easy getting tickets.

"Rajinikanth is like a brother to us. Everything about him is good. Even if people say his films are not good, I will still watch them. What is the point of being a fan then?" she asks. 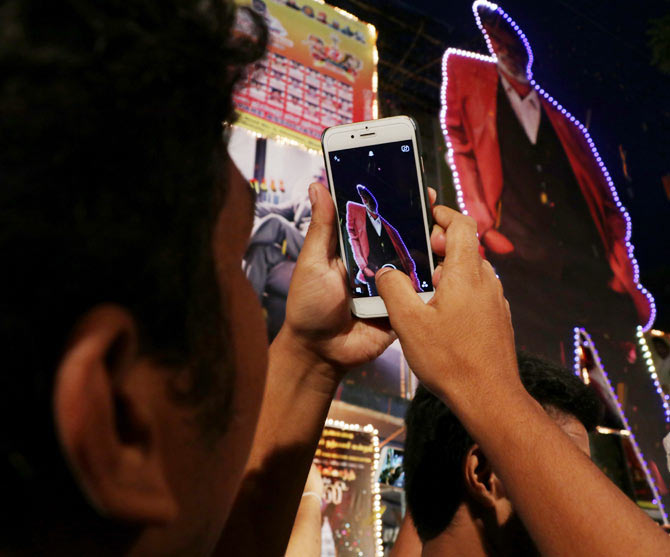 Priyanka Joshi came with a group of 25 people from Mulund, a suburb in north-east Mumbai. They had booked tickets three days in advance.

"The ticket window opened at 9 am, but we were there at 7 am. In 10 minutes, the tickets were sold out," she claims. 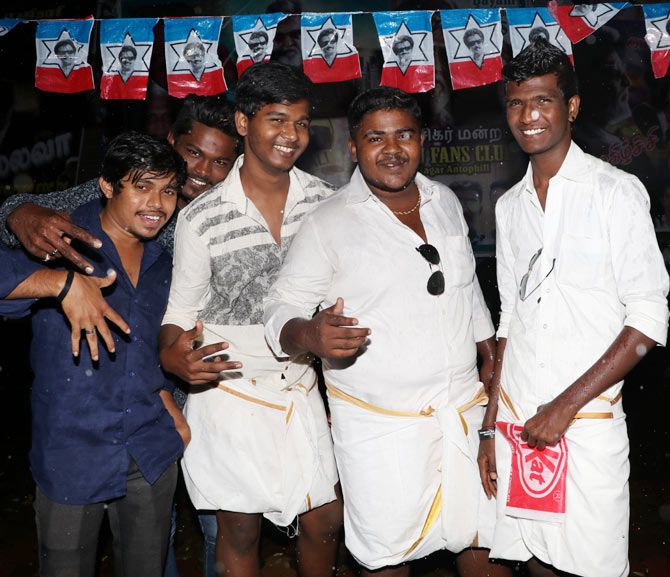 Lara, Arvind, Nilesh and Manoj have tickets for a 9am show but they reached the theatre at 6:30 am.

"When we go inside the theatre, we won't be able to hear anything, we will only have to see visuals, as we won't hear above the whistles," they say.

They are as excited for Rajinikanth's next film 2.0, and if they had a chance, they would have book tickets of that film right away. 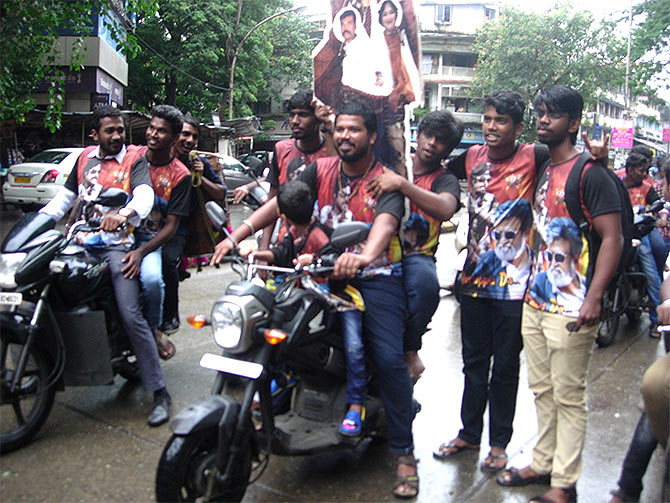 Vridhiswaran also has tickets for a 9am show but has been there since 5 am. His son Prem Kumar is a die-hard fan.

"My son can give his life for him. He came at 4 am, and danced, and now he has gone to watch the 6 am show with his friends," he says.

He had bought the tickets in black at Rs 300. "I was MTR's fan first and then Rajinikanth's. He is above God for me. He does a lot for the people too," he says. 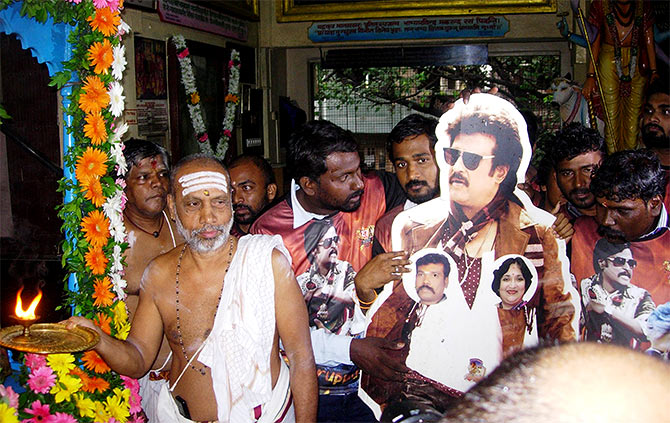 Sumitra Sitarao, who lives in the neighbourhood, tells us the celebrations have been going on for the last three days.

"They come in the evening, whistle and all," she says.

She's a big fan of the Thalaivar too. "He's from Bengaluru, Karnataka, just like me! He is very humble and helps people a lot. That's why they worship him like God," she says. 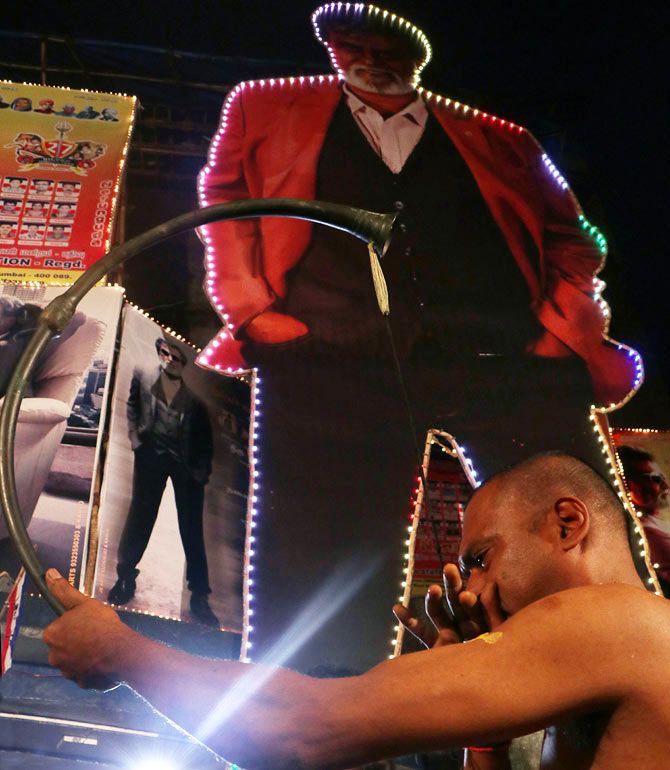 His fans have taken the craze to another level and have painted graffitis on Mumbai walls.

Not only that, there is a special flight Bengaluru to Chennai for Rajini fans who want to watch the film there! 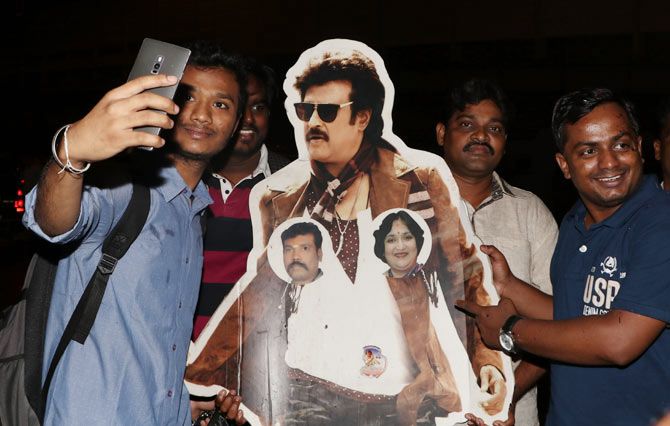 Read the live review of Kabali!