News
Business
Movies
Sports
Cricket
Get Ahead
Money Tips
Shopping
Sign in  |  Create a Rediffmail account
Rediff.com  » Movies » 'I am happy with whatever Dharamji did for me'

'Dharamji's mother Satwant Kaur was warm and kind-hearted.'
'I remember how she came to meet me at a dubbing studio in Juhu after I had conceived Esha.'
'She hadn't informed anyone in the house.'
'I touched her feet, she hugged me and said, "Beta, khush raho hamesha".'
Hema Malini goes back in time with some touching memories. 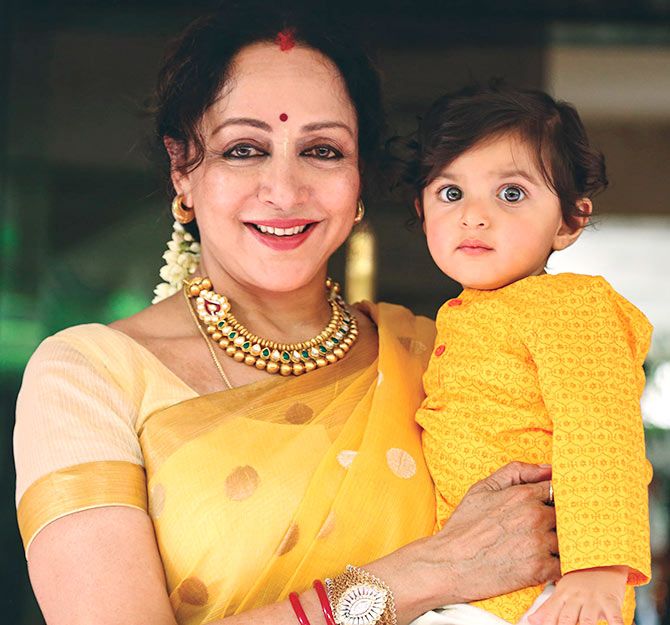 Hema Malini has lived her life under the spotlight.

Here, Hemaji talks about the first house she bought in Mumbai, her marriage to Dharmendra, and the equation she shares with his first wife Prakash Kaur.

'Ghar kahan dekha maine? (When have I had the chance to enjoy time at home?)' Hema Malini asks, sitting in her easy chair in the sprawling balcony of her New Delhi apartment.

Since she was a child, she has constantly been on the move; one apartment to another, one city to the next, one studio to the other.

Sipping on her green tea with Ayurvedic honey, she reflects, "It's a strange feeling; I started my childhood in Delhi, and now that we are on the last chapter of this book, we are sitting here in my Delhi apartment! It's literally been a full circle."

"Here I am today, looking at Parliament and wondering how that shy little kid from Gole Market, who could barely talk to anyone can today deliver a public speech even in her sleep!"

Hema's living room is tastefully done up with photographs of Dharmendra, Esha, Ahaana, Bharat and Vaibhav on the walls.

I notice that Darien's pictures are missing.

'Those are in my bedroom,' she says with a broad smile. 'Nazar lag jaati hai (Don't want the evil eye to affect him). 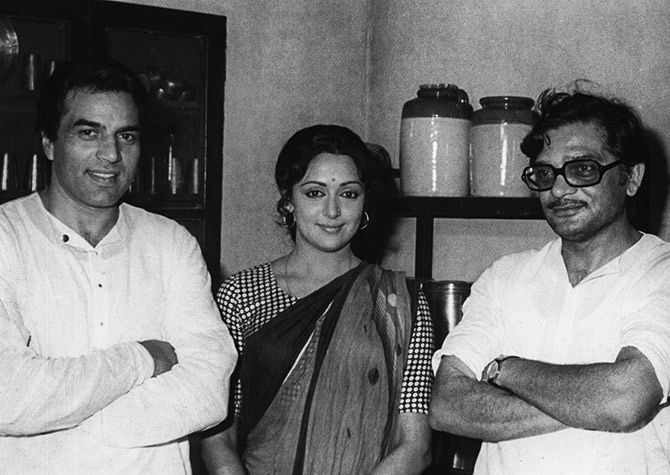 IMAGE: With Dharmendra and Gulzar on the set of Devdas, a film that didn't get made. Photograph: Kind courtesy HarperCollins India.

So, does she think that most of her childhood was lost somewhere in the by-lanes of Gole Market?

Before she can answer my question, her phone starts to ring.

What follows is the first of a hilarious round of frantic calls from the locals of her (Lok Sabha) constituency (Mathura).

As she disconnects, she notices the amazed look on my face.

"I am used to it," she says casually, and picks up from where we left. 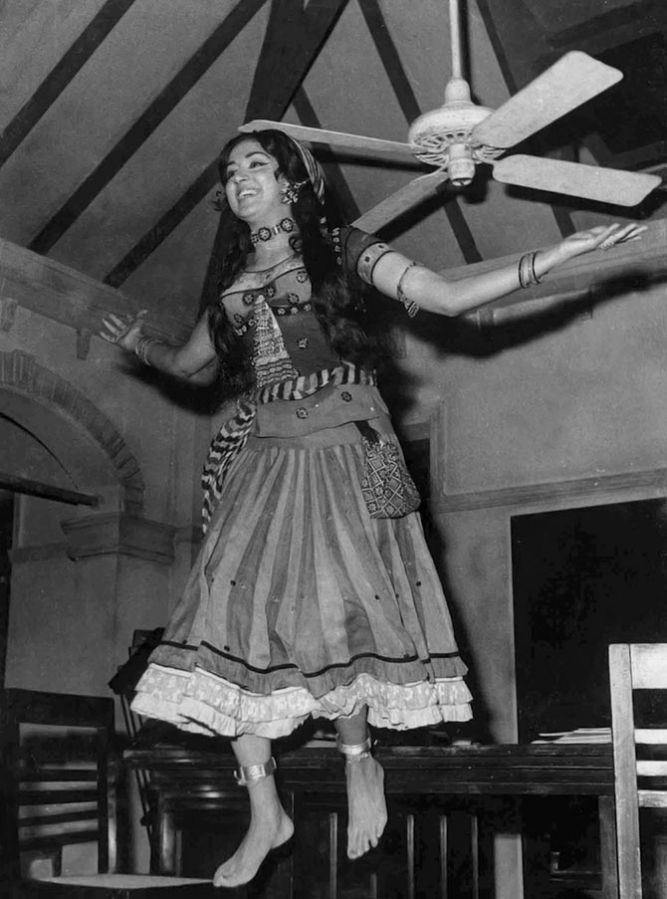 Her phone rings once again.

I'm amazed at the patience with which she handles these calls. This is certainly a new Hema sitting before me.

Meeting, connecting and sharing life with people at the grass-roots has been a humbling experience for the superstar.

"I cannot be expected to behave like a film star when I have decided to serve my people. They have voted for me with expectations and I cannot take them for granted," she reiterates. 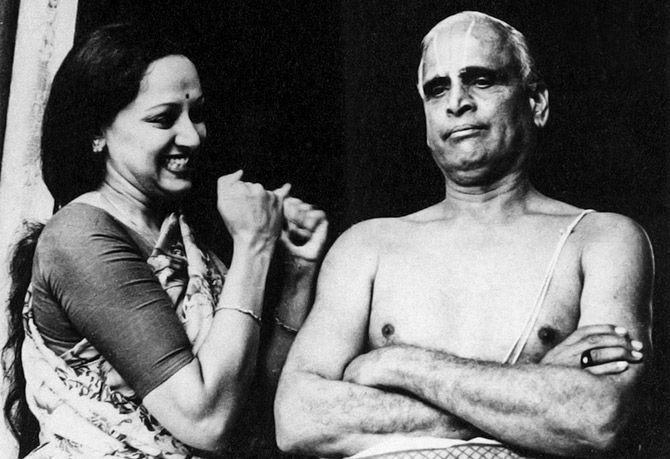 Going back to her younger days, she tells me, "When we sold our first car -- a green Ambassador (bought by her father in Madras, now Chennai) -- we all got emotional and cried! I had learnt to drive in that car."

"Once, I ended up driving all the way to T Nagar, where my dance school was. I remember getting quite a firing when my father got to know, but I was a good driver and he didn't know that. I guess those are middle-class emotions -- honest and naïve."

"Nowadays we don't get attached to things so easily. We dispose of everything so casually, from relationships to mobile phones."

"That was a time and a generation that valued memoirs. I am still attached to my wedding sari, and preserve it with care. There are so many little things I have kept as loving mementos of my father and mother."

"My daughters too have done the same. But I doubt if the next generation will. Maybe they will preserve everything on a USB, to keep their own memories light." 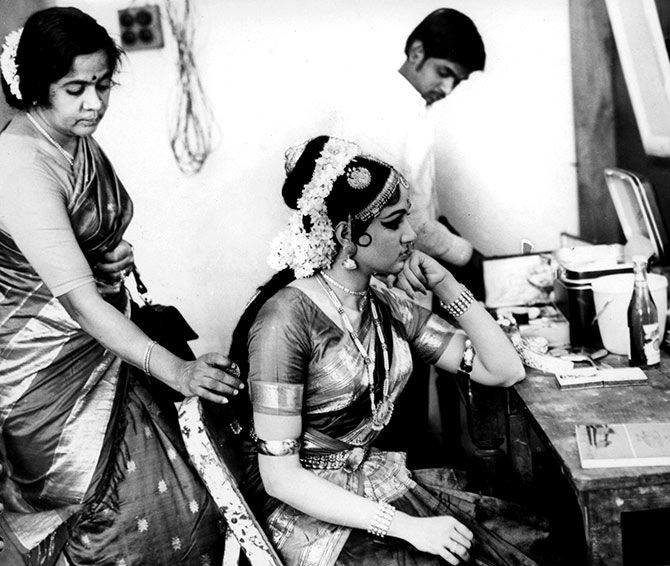 Her Juhu bungalow is up for renovation again; this time to welcome Esha's autumn baby.

Esha's friend Noorien Jumani has been working on brand new interiors for Esha, Bharat and their first-born.

'I am also getting Ahaana's and my floors renovated," Hema tells me before pausing. "I have never shared this... but I remember how one day, while I was shooting in Mumbai, I got a call from my dad saying that I needed to get to Walkeshwar for a puja.'

'I never questioned my parents, so during the shoot break I went over. There I saw a sprawling sea-facing apartment that my father had just bought for me. He asked me if I liked the flat.'

'That was perhaps the first time I told him that I didn't fancy staying in town (south Bombay) but wanted instead a house with a lot of trees, just like the one we had in Chennai. It was then that he started looking for a bungalow in Juhu.' 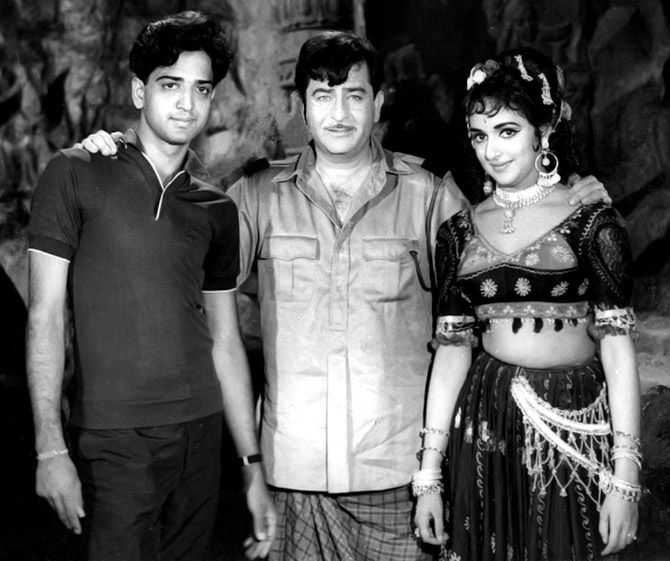 'I still remember it was after Subodh Mukherji signed me on for Abhinetri -- while I was still shooting for Sapnon Ka Saudagar -- that we shifted from Ananthaswami's house to Manavendra Apartments in Bandra. It was a tiny flat which Bhanu Athaiya used to visit for dress trials.

'Finally, when we did move to a bungalow in Juhu, on 7th Road, it turned out to be haunted.'

Her phone is buzzing again.

'Haanji boliye. Paani aayega. Aap thoda wait karo, sabko time-time pe milega, aap tension mat lo! (I assure you, you will get water, it's being distributed by turns. Have patience!).'

She picks up the thread again.

'Every night I would feel someone was trying to choke me; I used to have difficulty breathing. I would sleep with my mummy and she noticed how restless I used to be. If this had happened only once or twice we would have ignored it, but it happened every night.'

'That's when we decided to buy our own apartment. Actor Biswajit Chatterjee became my neighbour. I converted the garage into my dance rehearsal hall. I remember Dharamji would drop by for coffee, but back then I had no idea I would fall in love and get married to him.'

Finally, in 1972, while she was shooting for Seeta Aur Geeta, Hema bought a bungalow in Juhu.

'It was a five-year-old bungalow that belonged to a Gujarati. We constructed extra rooms in the house later. I loved that house because it had lots of trees around it.'

Incidentally, Hema was amongst the first heroines to settle in Juhu. Today the large, leafy neighbourhood is touted as the Beverly Hills of Bollywood. 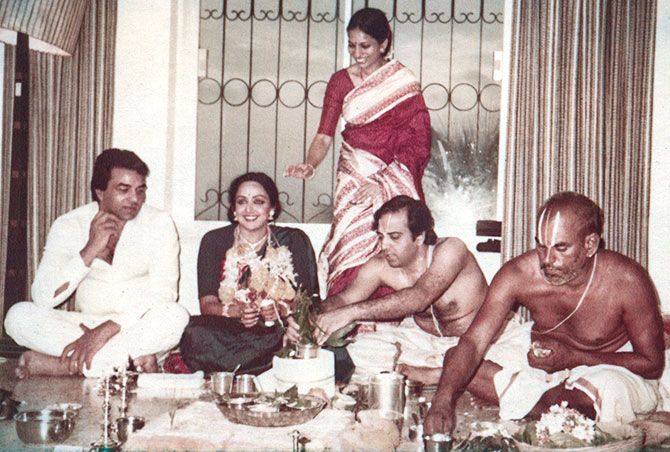 Hema and Dharmendra's marriage took place at her brother's house.

It was a quiet, traditional, Tamil wedding. That's how the couple had always wanted it.

She recollects fondly, 'He would drop by and meet my father or brother for chai. Instead of shaking hands he would arm-wrestle them, and after defeating them he would jokingly say, 'Tum log ghee-makkhan-lassi khao, idli aur sambhar se taqat nahi aati (Have butter, lassi, ghee. Idli and sambhar won't make you strong).'

'My father would join in the laughter. He (Dharmendra's father) was a very jovial person.'

'Dharamji's mother Satwant Kaur was equally warm and kind-hearted. I remember how she came to meet me once at a dubbing studio in Juhu, after I had conceived Esha. She hadn't informed anyone in the house. I touched her feet, she hugged me and said, "Beta, khush raho hamesha (Be happy always)." I was happy that they were happy with me.' 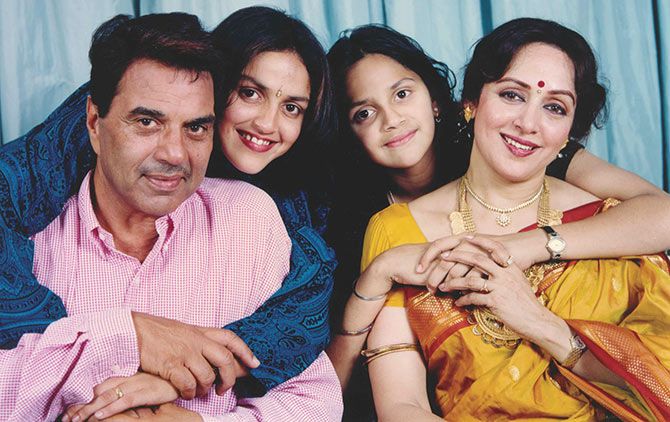 She was always clear that she didn't want to disturb the 'other' family.

She had met Dharmendra's first wife Prakash Kaur on several occasions, most of them social gatherings, but after her marriage their paths never crossed.

'I didn't want to disturb anyone. I am happy with whatever Dharamji did for me and my daughters. He played the role of a father, like any father would do. I guess I am happy with that.'

'Today I am a working woman and I have been able to maintain my dignity because I have devoted my life to art and culture. I guess, if the situation was even slightly different from this, I wouldn't be what I am today.'

'Though I have never spoken about Prakash, I respect her a lot. Even my daughters respect Dharamji's family. The world wants to know about my life in detail, but that is not for others to know. It's no one's business.' 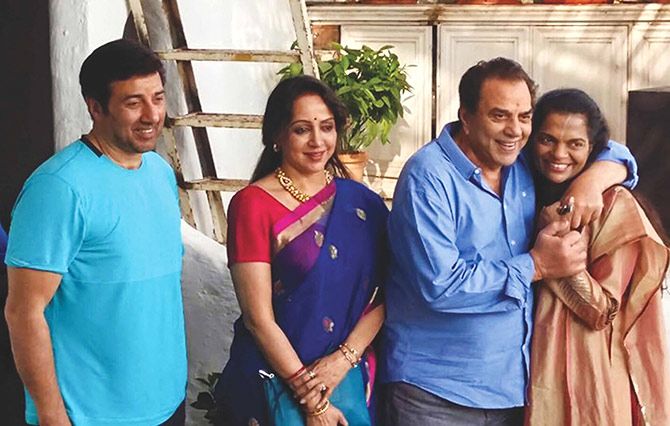 Esha is probably the only one (from Hema's family) to step into Dharmendra's house.

Keen on meeting her chacha, Esha paid him a visit.

'I wanted to meet him and pay my respects. (He passed away in 2015.) He had been very sweet to both me and Ahaana and we have always been very close to Abhay,' Esha shares.

'There was no option of him visiting us, because he was bedridden, and neither was he in a hospital where we could visit him. So, I called Sunny bhaiya and he organised everything.' 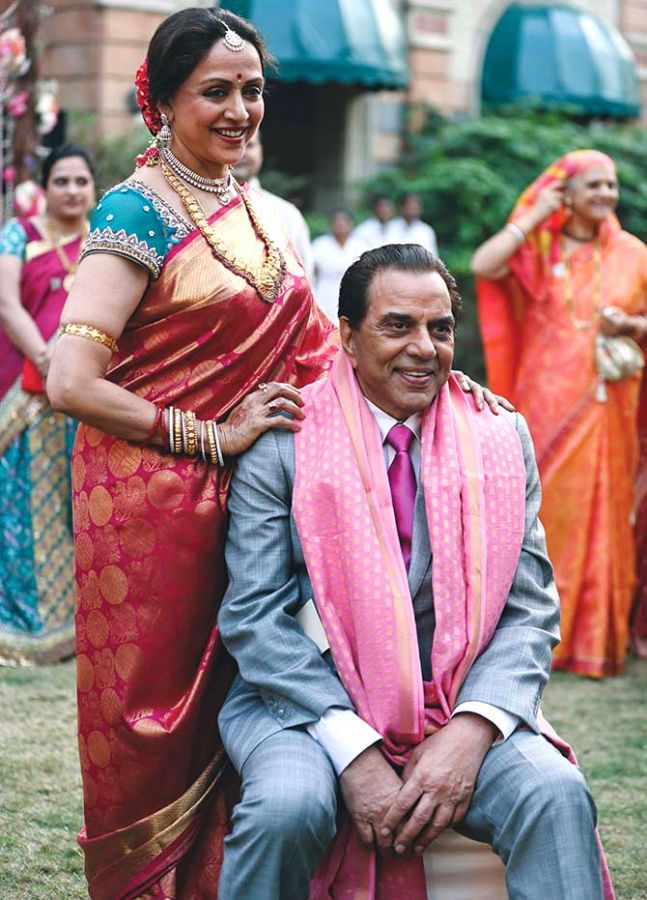 Hema's bungalow Advitiya is five minutes away from Dharmendra's 11th Road house, but it took almost three decades for Esha to traverse it.

On her way out, she also met Prakash for the first time.

'I touched her feet, she blessed me and I walked away...' she tells me after a prolonged silence.

Excerpted from Hema Malini: Beyond The Dream Girl by Ram Kamal Mukherjee with the kind permission of the publishers HarperCollins India. 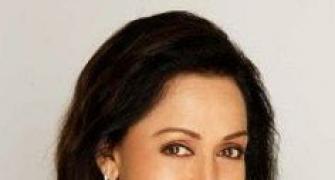 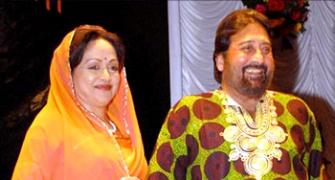 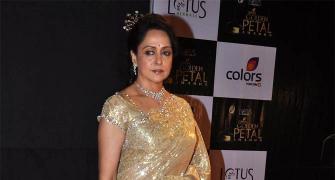 The Many Faces of Hema Malini 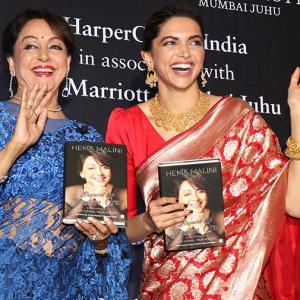 Sunny Deol and I share a beautiful relationship: Hema Malini 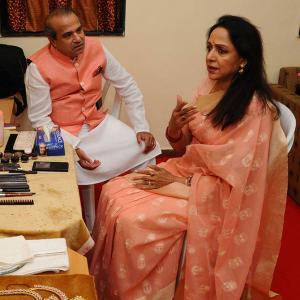