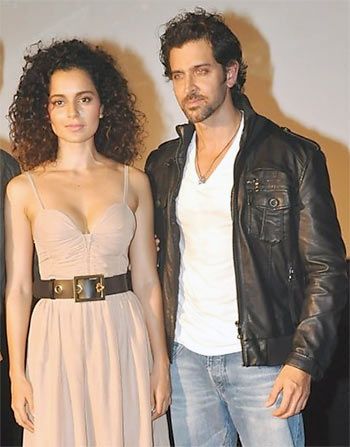 Hrithik Roshan and Kangana Ranaut have been at loggerheads ever since their alleged relationship went kaput.

The Krrish 3 co-stars were apparently dating each other but their affair did not last long and the two parted ways on a bitter note.

Then rumours started doing the rounds about Duggu being the reason behind Kangana's oust from Aashiqui 3.

When the actress was asked about the same at a press conference, she said, 'Yes, many lame rumours are doing rounds, even a dumbass can tell where these rumours are coming from.'

'I don’t know why exes do silly things to get your attention. For me that chapter is over and I don’t dig graves.'

This did not go down well with Junior Roshan, who took to Twitter to defend himself.

He tweeted that his chances of having affair with the Pope are much more than with the women the media has been linking him up with.

Now, Hrithik and Kangana's war has gone to the next level.

According to latest reports, the Bang Bang actor has sent a legal notice to Kangana for defamation.

The actor reportedly wants Kangana to apologise for calling him a 'silly ex'.

In retaliation, the Rangoon actress reportedly sent a 21-page legal notice to Hrithik, accusing him of intimidation and threat.

Let's wait and see which way the battle goes.