How War Movies Do At The Box Office

Men in uniform have time and again enticed movie-going audiences.

While Akshay Kumar's Sooryavanshi, where he plays a cop out to decimate terrorists, is doing well at the box office, we will see Salman Khan in Antim - the Final Truth and John Abraham in Satyameva Jayate 2 on November 26. The biggest movie to have come out of the Indian film industry which has featured men in uniform is Border.

The patriotic film based on the 1971 India-Pakistan war was a masterpiece by J P Dutta and benefitted immensely from the star presence of Sunny Deol and Jackie Shroff.

While Suniel Shetty won accolades for his terrific performance, Akshaye Khanna won hearts as the rookie on the scene. The last theatrical release with the lead protagonist donning uniform was Uri - The Surgical Strike.

Aditya Dhar's film was a surprise all time blockbuster as Vicky Kaushal came up with the cry of 'How's the Josh?' and won over audiences.

The film did exceedingly well to score a double century and one waits to see the next movie with an army backdrop that does such business in theatres. Salman Khan played multiple roles in Bharat and one such part was set on the high seas where he played a naval officer no less.

Of course he looked quite handsome in uniform, though when one looks at the film as a whole, it was a scattered affair where some portions worked and some didn't.

That said, Salman's presence and Director Ali Abbaz Zafar's handling of the patriotic affair ended up a in Rs 200 Crore Club entry for Bharat. 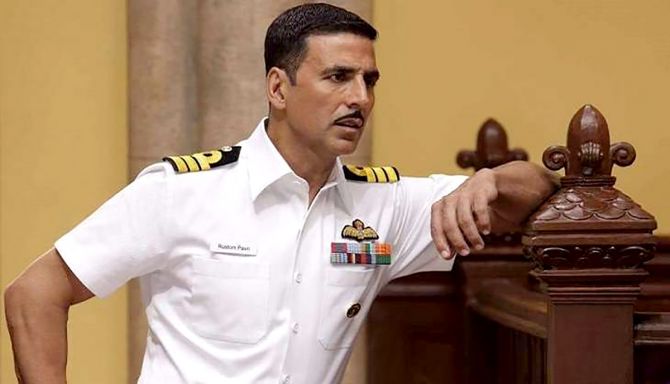 Akshay Kumar has played a man in uniform a number of times and while in Rustom he played a navy officer, in Holiday he enacted the part of a soldier.

Both films emerged good hits at the box office and entered the Rs 100 Crore Club. Rustom was a story of love, passion and crime while Holiday was a commercial affair where Akshay foiled the terrorists's plans to attack Mumbai. Shah Rukh Khan played two different parts in Jab Tak Hai Jaan and one such part had him play a soldier.

He looked good as he drove a bike through rugged terrain though Yash Chopra's final film was more of a love story than a war-based affair.

With Anushka Sharma and Katrina Kaif as the leading ladies, Jab Tak Hai Jaan, which had music composed by A R Rahman, was a decent box office success. One of the best films to have come out of Bollywood when it comes to narrating a tale based on a true story, Madras Café was based on the Indian Peace Keeping Force's military mission in Sri Lanka against the LTTE in the late 1980s which led to Rajiv Gandhi's assassination.

John Abraham produced this film where he played a soldier and came up with one of his best performances after New York.

Since then, the actor has got into the groove of several such notable performances, the last being Batla House where he played a man in uniform again, though as a cop.

Designed as a coming of age film, Lakshya featured Hrithik Roshan as a clueless youngster who learnt responsibility as a soldier in the Indian Army.

The Farhan Akhtar directed film had its moments though as a whole it worked only sporadically and with a segment of audiences.

Over the years, Lakshya -- set during the Kargil War -- is remembered far more fondly than it was on its release. 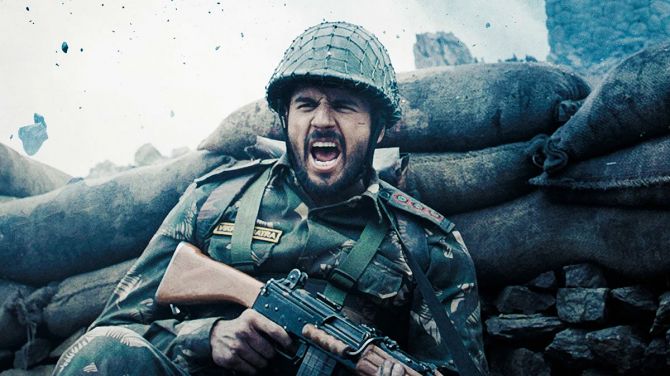 One film which has rightfully gained the status of being a modern day classic. Ready for a year, Shershah was waiting for the right time to arrive in theatres.

However, the second wave of the pandemic ensured it eventually arrived on OTT. Lead actor Sidharth Malhotra -- who played Kargil War hero Captain Vikram Batra -- believes this film was made primarily for a theatrical experience.

Accolades have flow in for Sid and the film since its OTT release this Independence Day. If it was Shershaah this year, it was Gunjan Saxena - The Kargil Girl last year.

Karan Johar seems to have picked the knack for backing films with an armed forces backdrop and this can well be seen in the way the biopic on Indian Air Force pilot Gunjan Saxena was made.

Janhvi Kapoor made folks sit up and notice her bravura performance in this well made film that would have done quite well at the box office had it been released in theatres. When the pandemic started peaking, Ajay Devgn was swift to announce that he would bring Bhuj: The Pride of India to OTT.

The film began streaming this Independence Day and featured Devgn as an IAF officer who mobilises civilians to take on the enemy in the 1971 War.