How to Defeat Pirates who STEAL Films IMAGE: When Salman Khan's Radhe: Your Most Wanted Bhai launched on a streaming platform, non-subscribers of the service found that they could easily download it on Telegram channels and WhatsApp groups. Photograph: Ashish Narsale/Rediff.com

In May, when the much anticipated Salman Khan-starrer Radhe: Your Most Wanted Bhai launched on a streaming platform, non-subscribers of the service found that they could easily download it on Telegram channels and WhatsApp groups.

This was also the case with the Varun Dhawan-starrer Coolie No.1, which released in December.

With cinema halls remaining shut during the ongoing pandemic, Indian film-makers took to Over the Top (OTT) or streaming service-first releases. While this has increased access and convenience for viewers, piracy of original content -- whether movies or original shows on streaming platforms -- has become ever-more rampant.

Among original content that was pirated last year was SonyLIV's Scam 1992, and MX Player's Ashram.

The India Brand Equity Foundation estimates that the country's OTT sector witnessed a 30 per cent rise in the number of subscribers -- from 22.2 million to 29 million -- between March and July 2020.

These include tampering with video playback software or Android OS, recording screens during playback using a mobile device, intercepting decrypted video using HDCP strippers connected to set-top boxes, credential-stuffing attacks to access and use legitimate viewer details, and transportation of video out of a given market using a virtual private network.

'Release groups prize pre-release TV shows and movies. The structure of the media industry presents a range of opportunities with so many different organisations and individuals involved in the production process,' notes the Akamai white paper.

Manan Shah, a young entrepreneur, is one of those who has come to the aid of film-makers and producers grappling with the problem of rampant piracy.

His Vadodara-based cybersecurity firm, Avalance Global Solutions, has built a product that helps automate the process of identifying pirated content for Bollywood.

Shah's firm Zeustride's proprietary web-crawling technology is capable of simulating human behaviour while searching for infringed content all across the Web. It has provided Anti-Piracy as a Service (APaaS) for films such as Aiyaari, Yamla Pagla Deewana Phir Se, Namastey England, The Accidental Prime Minister, Badla, and Total Dhamaal.

Explaining how the monitoring tool works to identify pirated content, the firm says, 'Our monitoring tool starts by crawling search engines and forums for early alerts on pirated content. While de-indexing results from search engines will make content unavailable to the majority of 'casual' pirates, removal of content from protected hosting sites is crucial to permanently disrupt the piracy of this content.'

Zeustride's anti-piracy platform has developed a database of infringers that is updated daily with new piracy sites to accelerate detection and monitoring of copyright violations. The detection process is carried out by bot-powered searches, which scan sites based on keywords and other search parameters. These bots constantly monitor pirate sites and provide up-to-date data.

Shah says the software is intelligent enough to figure out whether a pirated copy of an original has been uploaded on a social media platform with a different name.

Among messaging services, the maximum pirated content is circulated on Telegram.

"Zeustride is able to detect and monitor fraudulent links in social media platforms like Facebook, Twitter, Telegram or Instagram and remove them from posts, groups and conversations where the links are shared," he adds.

Once piracy sources and distribution channels are identified, companies like Zeustride, as per their contract with production houses, are allowed to send takedown or warning notices to Internet Service Providers or websites for hosting pirated content.

But, the question is, can piracy be completely contained?

Not entirely, says the Akamai white paper, but adds: 'If the problem is tackled strategically across the value chain, then it can be minimised.' 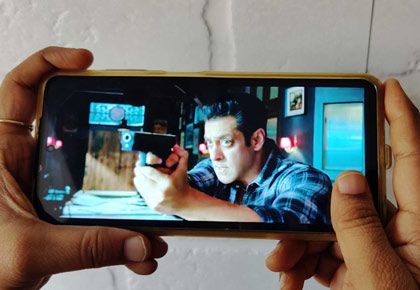