'Those involved in the government had invested in cineplexes in Tamil Nadu, so they wanted Vishwaroopam stopped to further their gains.'
'When there was a difference of opinion, they started punishing the film by banning it.'
'It is ugly, tyrannical politics which the nation did not understand.'
'They broke me for Rs 60 crores.'
'Because I am a star, I am living to tell the story.'

"I went on a bigger show (than Bigg Boss). There is no escape from it," Kamal Haasan announces to the media as he promotes his new film Vishwaroopam 2.

"Everybody is watching and they will put me in the dock," he adds.

He is referring, of course, to politics, a topic the movie superstar is very keen on discussing these days.

"Success is a bus that takes you to a destination. Failure is the wrong bus you got into. The vehicle is the same, the pleasures and problems of travel are the same, but if you don't reach the destination, you get shocked," he tells Rediff.com's Patcy N in the concluding segment of his two-part interview.

When a single person acts, writes and directs, what are the advantages?

In the olden days, everybody did that.

When cinema was a nascent industry, everybody did that.

Charlie Chaplin did that and here, (Sohrab) Modisaab did it.

A director like Guru Dutt, see how many hats he wore, including acting. He was not keen on acting, but when he did not get Dilip Kumar's call sheet, he started acting. 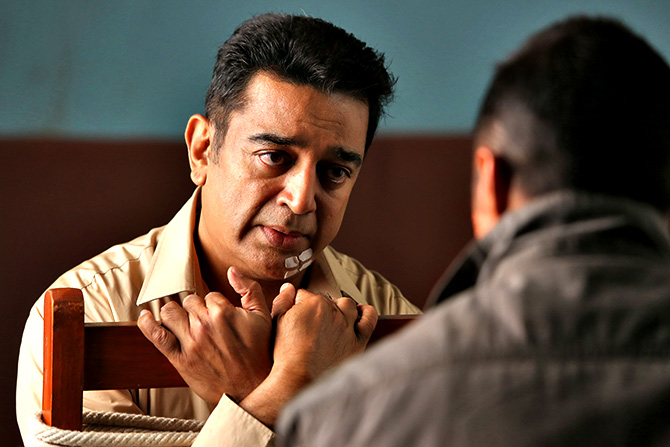 What is your take on the Hindi film industry?

It is better than what it was.

New blood is flowing and that is very important.

Pehle aisa nahi tha (It wasn't like this before); there was a deadly divide between art and commercial cinema.

When you sell tickets, it is commercial cinema.

When you make a film, it is art.

But why divide it?

This has been my debate for the past 40 years. It became like a caste system, one did not touch the other.

Satyajit Ray did not have a problem admiring Sholay. He said he would not make a film like that but he would admire it for its technicality. 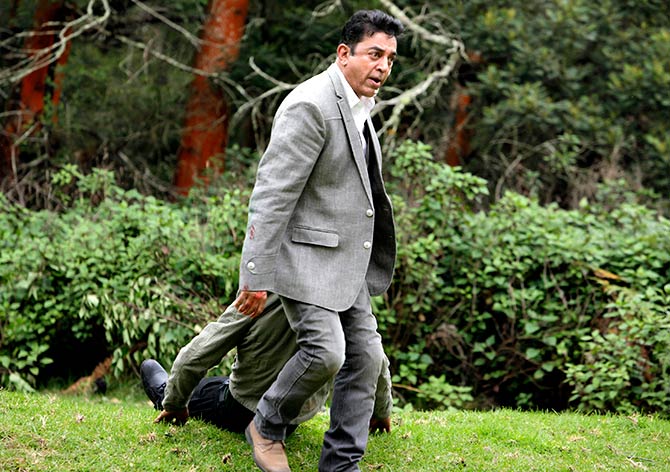 IMAGE: 'Most film-makers don't have the time to watch others' films,' says Kamal Haasan.

Any recent Hindi film you have watched?

Because of my busy schedule and the fortune of digital cinema, I can stop it.

You cannot stop ticketed cinema, and that's a misfortune.

I was watching Raazi; I wanted to watch it because of my connections to the people involved in the film, but I could not watch it fully. I am trying to do my best with my busy schedule.

Most film-makers don't have the time to watch others' films.

Now, I'm not only a film-maker, but a politician too. Time is of essence to me.

When Vishwaroopam released, you wanted to release the film simultaneously on DTH (Direct To Home). There was some controversy around it.
You just spoke about digital medium versus the ticketed show. How have things changed in the last six years?

What is wrong in bringing in DTH?

How is it that the film had to be banned because a film-maker was thinking of using a new methodology of dispersing his material to the public?

You must understand the corrupt politics and the mafia behind it.

Those involved in the government had invested in cineplexes in Tamil Nadu; they were purchasing theatres, so they thought this would be a disruptive situation.

They wanted the movie stopped to further their gains.

When there was a difference of opinion, they started punishing the film by banning it.

To find the reason to ban it, they used a community.

It is ugly, tyrannical politics which the nation did not understand because of the subversive technology of DTH.

It's here, and there are many platforms and big companies involved now. 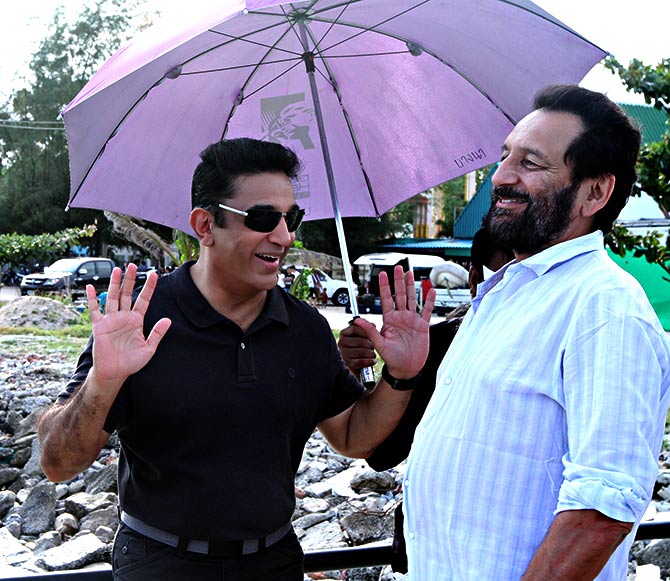 IMAGE: Kamal Haasan with Shekhar Kapur on the sets of Vishwaroopam 2.

How much business was affected?

It affected me personally.

Because I am a star, I am living to tell the story. Imagine if I was just a producer.

They thought I would kneel but as I told you, I am the great grandson of Gandhi. They did not realise that. (Laughs.)

You have experimented with your looks a lot.

I was trained by a mentor (K Balachander), who thought experiment is the way of life and curiosity is the reason for the ascent of man.

So it is bound to happen.

If I had another kind of guru, I would have been a different man. 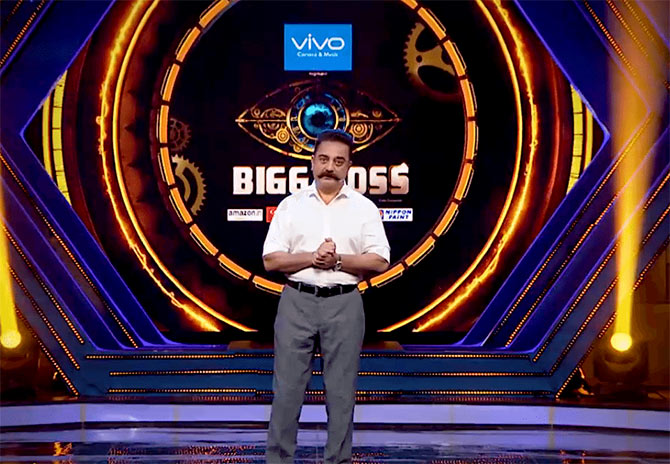 You have hosted Bigg Boss. Would you ever want to enter the show as a contestant?

I went on a bigger show (politics). (Laughs.)

There is no escape from it.

Everybody is watching and they will put me in the dock.

There, when the season is over, you are out.

But here, whatever right or wrong I do, it will leave after me. That's the show I have entered.

Anyway, the reason I took on Bigg Boss was also a part of my political plan.

I address 3.2 crore (32 million) viewers. The population of Tamil Nadu is 7.5 (75 million) crore, so every Saturday, I address that crowd. It's an enormous opportunity.

They asked me, why didn't I do a show like Satyamev Jayate?

I replied, 'I am doing it in life, not as a realty show.'

What does success and failure mean to you?

It is just change of words to me.

Success is a bus that takes you to a destination.

Failure is the wrong bus you got into.

The vehicle is the same, the pleasures and problems of travel are the same, but if you don't reach the destination, you get shocked.

The amount of work I put in for Hey! Ram is equal or more than what I did for Vishwaroopam. 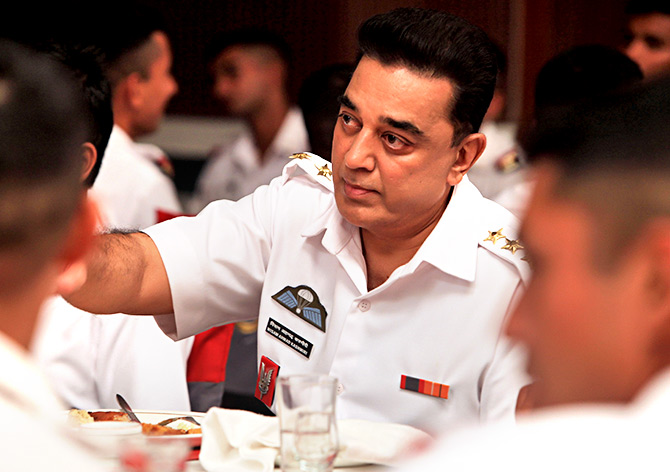 IMAGE: 'The amount of work I put in for Hey! Ram is equal or more than what I did for Vishwaroopam,' says Kamal Haasan.

Your films are physically demanding. How does your age make it difficult?

It's all in the mind.

Jackie Chan is still flipping back and forth like a rubber ball!

In Limelight, Chaplin does a split. He was 67 then.

Would you like a biopic to be made on you?

I will never agree to that.

If an actor is mimicked by somebody else, the person who is getting mimicked may not laugh, but the rest of the audience will. 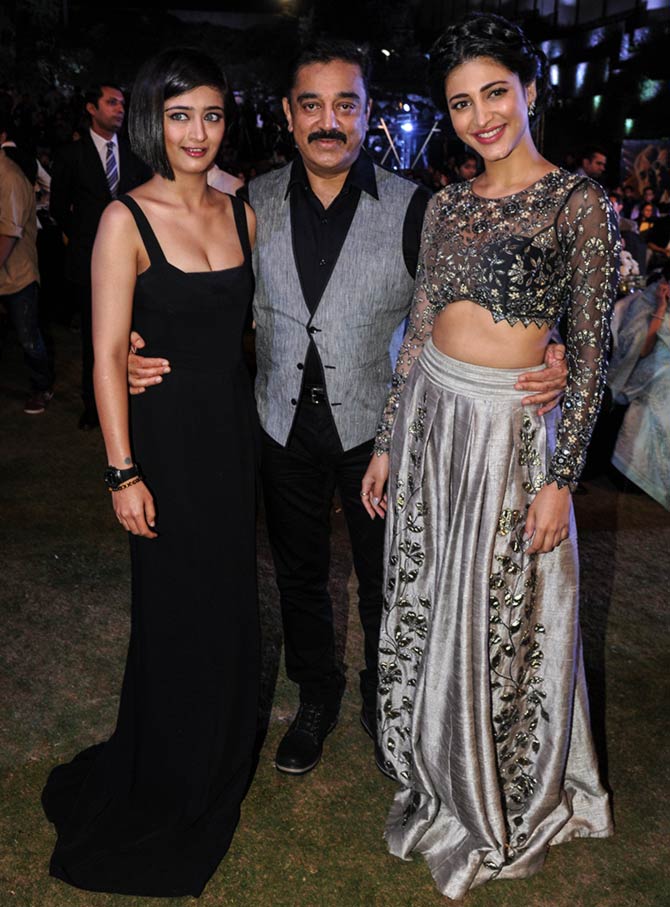 What kind of career advice do you give your daughters, Shruti and Akshara?

I don't advise a lot because I did not take anyone's advice.

I made my own decisions.

I have always been opinionated, right from the beginning.

I have tried to change their opinions.

I don't know whether it's this Gandhi fixation that I have, but I think you have to change opinion, and the change has to come from within them.

I can't arm-twist them. Maybe that's why my children call me Bapu. I wanted them to call me that.

Your daughters have said they want to act with you in a film.

Akshara is doing a film for my company now with one of my assistants, who has become a director.

You have been Sridevi's co-star. Have you seen her daughter Janhvi's debut film, Dhadak?

No. Boneysaab (Kapoor) offered to show it, but we were busy with the (political) party then.

Any memories of Sridevi?

I have done 27 films with her. That itself, is an experience.

It's a pity that everybody comes to an end, but this was a little too abrupt and unexpected for me.

Any fond memories of Independence Day?

I remember a time when Shruti and Akshara were eight and five respectively, and it was raining. I insisted that we must still raise the flag.

So we were all wet and saluting in our house! 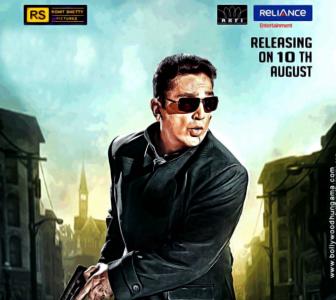 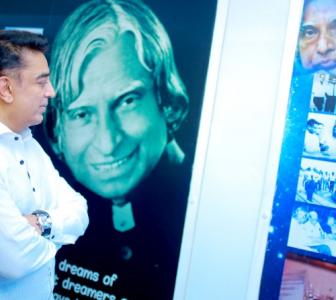 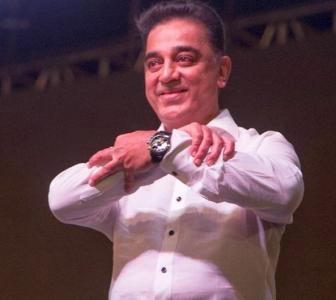 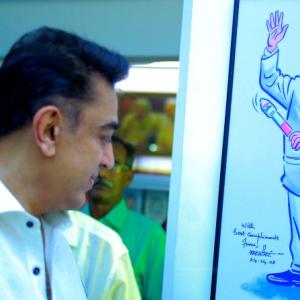