How I Won the War gets new life 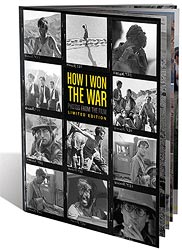 Viewers back in the late 1960s might have had some reasons not to appreciate the brilliant farce How I Won the War. Though it was released at the time of the phenomenal success of the Beatles, it starred only one of the Fab Four, John Lennon. And that was perhaps one of the reasons why it did not get the popularity it deserved. But over the last decade, the  DVD edition of the film has caught on, beckoning not only nostalgic fans but new converts.

It is over a month since MGM/Fox released a new Special Edition of the film directed by Richard Lester, best known for the fabulously successful Beatles movies, A Hard Days' Night and Help! If you missed buying the DVD then, look around for a friend who bought it and must be treasuring it especially for its special features. For it has excellent memorabilia but even if you cannot find a DVD with the Special Edition extras, you can still enjoy anew or for the first time this dark farce which needs to have much more recognition it has already garnered in recent years.

Those who have the Special Edition ought to share it with their friends and other movie buffs. They should also look out -- and alert their friends -- to a number of newly released Blu-ray editions classics such as The Manchurian Candidate and Some Like It Hot, not to forget the 40th edition of Platoon.

"We are excited to bring How I Won the War to DVD for the fans of John Lennon," declared Matt Lasorsa, a senior vice president of MGM DVD Marketing. "We were fortunate enough to have Yoko Ono write an introductory letter for the book giving insight to John's experience on the film. The special introductory letter, combined with photos of John from the film, makes this commemorative booklet a must have for John Lennon fans."

Re-mastered under the supervision of Lester, the new edition has a glow and depth you cannot find it on TV. Enjoy not only the anti-war jokes but also the performances of many well known and comparatively little known British artists. Michael Crawford is seen as an inept British WWII commander Lieutenant Earnest Boodbody, with Musketeer Gripweed (John Lennon), Musketeer Juniper (Jack MacGowran), Musketeer Clapper (Roy Kinnear) and Sergeant Transom (Lee Montague) under his command. Among the film's highlight is an absurdist collage of battle footage and one-liners on the absurdity of war.

Never mind how many times you have seen Some Like It Hot in the theaters, on TV and in the DVD editions, you will have astounding fun with the Blu-ray edition of one of the finest comedies ever made. 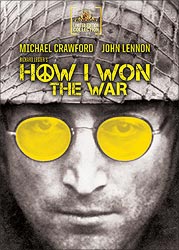 The Marilyn Monroe, Tony Curtis and Jack Lemmon classic directed by Billy Wilder, one of the most successful movie directors in Hollywood, looks smarter in the new Blu-ray edition. Extras include interviews with Curtis and Lemon, insights into the making of the film and a featurette

on the film's legacy.

The drag comedy has 'inspired' innumerable films worldwide, not to forget many drag scenes in Hindi films most famously, Biwi Aur Makhan made over four decades ago.

Nominated for six Oscars, the non-stop comedy sensation focuses on skirt-chasing musicians, Joe and Jerry (Curtis and Lemmon) who witness the St. Valentine's Day Massacre in Chicago. They are wrong people in the wrong place.

To escape the wrath of gangland chief Spats Colombo (George Raft), the two men board a train bound for Florida disguised as Josephine and Daphne. They seem to be having a perfect cover but how can they resist the allure of the lead singer, Sugar Kane (Marilyn Monroe)? She sings I'm Through with Love but in reality she is yearning for some.

The briskly edited comedy has sublime moments like the ones in which Curtis woos her without his dress, adopting the voice of Cary Grant.

Complications surely abound especially when an aging playboy (Joe E Brown) is smitten by Jerry's feminine charms, and Colombo is not prepared to give up his hunt.

You see the film on Blu-ray not only to marvel the smooth transfer and striking visuals but also relive the nostalgia and show the younger generation that romantic comedies can be witty and acted with passion. The new edition also offers splendid recording of the film's romantic music.

The remake of the suspense classic The Manchurian Candidate was a box-office and critical disappointment a few years ago. The new version, meant for older and a new generation, is one of the most treasured Blu-ray versions of the original film that I have seen in the past six months.

Many film historians and critics including the legendary Pauline Kael have called the political thriller directed by John Frankenheimer an outstanding film. 'A masterpiece, one of the best and brightest of modern films,' declared the eminent critic Roger Ebert.

I have had a DVD of the film for many years but after seeing the Blu-ray version, which offers sharper images, I don't feel like looking at the former anymore.

'You will never find a more chillingly suspenseful, perversely funny, or viciously satirical political thriller than The Manchurian Candidate, based on the novel by Richard Condon (author of Winter Kills),' wrote critic Jim Emerson.

The 1962 film, an awesome conspiracy drama, was withheld from distribution at the insistence of star Frank Sinatra for almost a quarter century after President Kennedy's assassination.

It tells the story of how a former infantryman Bennet Marco (Sinatra) is haunted by nightmares thanks to his imprisonment during the Korean war. The subject of the dreams is Sergeant Raymond Shaw (Laurence Harvey), a decorated war hero under the spell of his mother (a superb Angela Lansbury) and then there is Senator John Iselin (James Gregory), an outright demagogue. Who is telling the truth? And then, who is right or wrong?

Though the film is set in a period of great unrest and suspicion in America and has to be seen in a political context of the 1950s and early 1960s, it still has universal appeal.

It is such a multi-layered film that you will appreciate it further on second and third viewing. And the new Blu-ray is a great one to do so.
Arthur J Pais in New York