Housefull 3 review: I survived. Will you? 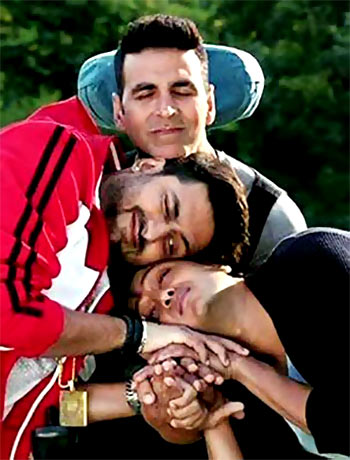 Sukanya Verma has 10 reasons why you should watch Housefull 3.

Ritesh Deshmukh can see. Abhishek Bachchan can talk. Akshay Kumar can walk. And I, somehow, survived Housefull 3. That, ladies and gentleman, is the real miracle.

It is my moral duty to ensure you do too by providing you 10 reasons why you cannot afford to miss the third offering in the franchise of the senseless, by the witless, for the brainless.

1. One can't simply turn a blind eye to the enormous effort put in by writer-director duo Sajid-Farhad to ridicule multiple forms of handicap and then defend it by throwing in a church scene at its fag end, wherein a priest after Bollywood's own heart spews gyaan like “Awww…you did it for love.”

Of course, they did, for THE LOVE OF THE BOX OFFICE.

2. Housefull's tradition of lowbrow humour is faithfully carried on through Housefull 3's relentless stock of sexist and racist jokes.

Insinuate a black housemaid slept with a desi who couldn't tell because it was dark -- side-splitting.

Hysterectomy is great advice because nobody would want to marry a woman who can't conceive -- now that's just… priceless?

But, hey, look at the bright side -- no homophobic jokes. If this isn't an improvement, what is?

4. Comedy is pulverising the English and Hindi languages to babble baloney. In Housefull 3, the girls don't have too many lines but, when they do, they change into Ajay Devgn's character from Bol Bachchan in reverse.

And so, in mumbo jumbo tongue, 'Kaamwali gayi kaamwali gayi' is 'Let bygones be bygones', 'Naukri neeche' means 'Calm down' and 'Paal-pos ke oopar ja' translates to 'Grow up'!

5. Ever seen dogs lift their leg to pee against a lamppost, tyre or tree?

Incredible how Housefull 3 finds creative inspiration in that most unbecoming of sights and choreographs an entire song and dance devoted to this act in Taang uthake.

6. Discover deep metaphors on how intently Housefull 3 focuses on its leading ladies' long legs (they deserve individual billing in the credits), as if to atone for Akshay Kumar's phony immobility.

7. Intentional or not, Housefull 3 brims with ingenious tributes to popular movie imagery.

How considerate of Akshay to plug his Airlift success lest we forget it released only six months back?

Or Jackie Shroff to remind how groovy he looked in a red bandana when he made Hero 33 year ago? But, mostly, that history doesn't repeat itself when passing off maple leaf as pocket square even if you're the man who made a fashion statement in a bandhni dupatta.

Then there's Abhishek, mouthing lines off Amitabh Bachchan's movies and posing next to his statue at Madame Tussauds for a selfie. Could they be related?

8. If the Sholay chartbuster, Jab tak hain jaan, jaan-e-jahan, main nachoongi was a guy, he'd be Akshay Kumar in Housefull 3.

While everyone and everything else appears to be on autopilot, Akshay goes on and on like a accursed wind-up toy demonstrating what would Hulk look like if he, instead of turning big and green, became mad like the manic Manjulika (of Bhool Bhulaiya fame) but in a Ramsay film ghost-directed by Priyadarshan.

9. Housefull 3's second most remarkable piece of acting comes from an army of CGI ants. To divulge more would be such a spoiler so I'll refrain.

10. Still curious about this hokum? Clearly, sarcasm is not your cup of tea but there's good reason to believe Housefull 3 might be. If only I could say 'enjoy.'